Background: We aimed to analyze the impact of cefotaxime non-susceptibility on the 30-day mortality rate in patients receiving a third-generation cephalosporin for pneumococcal bacteremic pneumonia. Methods: We conducted a retrospective observational study of prospectively collected data from the Hospital Clinic of Barcelona. All adult patients with monomicrobial bacteremic pneumonia due to Streptococcus pneumoniae and treated with a third-generation cephalosporin from January 1991 to December 2016 were included. Risk factors associated with 30-day mortality were evaluated by univariate and multivariate analyses. Results: During the study period, 721 eligible episodes were identified, and data on the susceptibility to cefotaxime was obtainable for 690 episodes. Sixty six (10%) cases were due to a cefotaxime non-susceptible strain with a 30-day mortality rate of 8%. Variables associated with 30-day mortality were age, chronic liver disease, septic shock, and the McCabe score. Infection by a cefotaxime non-susceptible S. pneumoniae did not increase the mortality rate. Conclusion: Despite the prevalence of cefotaxime, non-susceptible S. pneumoniae has increased in recent years. We found no evidence to suggest that patients hospitalized with bacteremic pneumonia due to these strains had worse clinical outcomes than patients with susceptible strains. View Full-Text
Keywords: cefotaxime; pneumonia; bacteremia; outcomes; infectious cefotaxime; pneumonia; bacteremia; outcomes; infectious
►▼ Show Figures 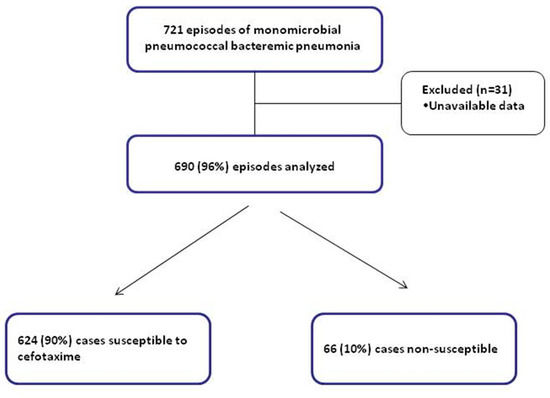