Gastroparesis and Dumping Syndrome: Current Concepts and Management
Next Article in Special Issue

Tadalafil 5 mg Alone or in Combination with Tamsulosin 0.4 mg for the Management of Men with Lower Urinary Tract Symptoms and Erectile Dysfunction: Results of a Prospective Observational Trial

Erectile dysfunction (ED) and lower urinary tract symptoms (LUTS) related to benign prostatic obstruction (BPO) are common conditions in middle-age or older men [1]. Men with LUTS have a higher incidence of ED, and LUTS themselves represent an independent risk factor for ED, [2] triggering a significant negative impact on quality of life (QoL). The underlying pathophysiological links between LUTS secondary to benign prostatic hyperplasia (BPH) and ED are not yet completely understood, even though several determinants are shared by these two clinical entities [1,3].
Alpha-blockers (ABs) and 5a-reductase inhibitors (5 ARIs), alone or in combination, are the mostly prescribed drugs to manage patients with LUTS/BPH [4]. ABs are usually the first line treatment for LUTS thanks to their rapid onset of action. By antagonizing alpha(1A)-adrenergic receptors in the prostate and urethra, they cause smooth muscle relaxation in lower urinary tract (LUT) determining the decrease of the functional obstruction [5,6].
The association of AB with 5 ARI has been proposed and widely adopted in order to reduce the overall risk of BPH progression and to improve LUTS in patients with moderate enlarged (≥40 mL) prostates when long term treatment is planned. However, in several sub analysis voiding symptoms and maximum urinary flow rate (Qmax) improvement was not as high as expected. Moreover, these therapies have potential major side-effects on sexual activity, particularly in erectile and ejaculatory function [7,8,9].
Phosphodiesterase type 5 inhibitors (PDE5-Is) were approved for the treatment of ED, but they have been also demonstrated as highly effective in blunting LUTS in men with or without ED [10,11,12,13]. Indeed, PDE5-Is act on the relaxation of bladder neck and prostate by increasing nitric oxide in smooth muscle, allowing a direct action on micturition phases and not only penile erection. [14,15].
Moreover, they exert potent anti-inflammatory effects on prostate therefore reducing fibrosis and overgrowth. All these beneficial effects help in maintaining prostatic structural anatomy and physiological activity [16,17].
Currently the efficacy of PDE5-Is on LUTS recovery has been well established, and tadalafil 5 mg once daily has been approved for the treatment of LUTS/BPH with or without coexisting ED [3].
Recently, a meta-analysis of 12 randomized controlled trials (RCTs) on PDE5-Is suggested that combination therapy with ABs, particularly with tamsulosin, the only AB approved by the Food and Drug Administration in combination with tadalafil for the treatment of LUTS, allows achieving an additional significant improvement of International Prostate Symptom Score (IPSS) as compared to ABs alone. Conversely, we have no definitive evidence for the comparison between PDE5-Is plus ABs vs. PDE5-Is alone [18].
We carried out a prospective placebo-controlled trial, with the aim to compare the efficacy and safety of daily administration tadalafil 5 mg alone (tadalafil plus placebo) with the combination tadalafil 5 mg plus tamsulosin 0.4 mg in men with LUTS/BPH and ED.

Our prospective observational trial was conducted in two departments of urology. Across a period of 12 months, 82 consecutive men presenting with ED and LUTS suggestive of BPO were enrolled.
Inclusion criteria were: age >40 to 80 years, mild to severe ED (International Index of Erectile Function–Erectile Function-5 <22), moderate to severe LUTS (International Prostate Symptom Score >7) and with Qmax >5 mL/s obtained from a uroflowmetry assessment. Exclusion criteria were: hypersensitivity to tadalafil or tamsulosin, prostatic cancer or suspected with prostate-specific antigen (PSA) >4 ng/mL, bladder lithiasis, previous prostatic surgery, urinary tract infection, neurogenic bladder, finasteride or dutasteride use within 3 or 6 months, respectively, clinical history of urethral and/or proven bladder neck obstruction.
The present trial was carried out according to the ethical principles of the Declaration of Helsinki, following the rules of good clinical practices. The study was approved by the review boards of the two involved institutions (Ethics Committee Approval OSS.15.031, approved on 22 June 2015). All men provided written informed consent before initiating any trial procedure or therapy.
The assessment of patients included age, body mass index (BMI), waist circumference (WC), blood pressure, clinical laboratory parameters, digital rectal examination. LUTS and ED were assessed using validated questionnaires. In particular, LUTS with total International Prostate Symptom Score (IPSS), focusing also on storage and voiding IPSS subscores, nocturia question and IPSS QoL [19], ED with International Index of Erectile Function-5 (IIEF-5) [20]. Uroflowmetry was performed by all the subjects enrolled and postvoid residual volume (PVR) was evaluated with abdominal ultrasound immediately after voiding.
Subjects reporting intake of BPH, overactive bladder, or ED therapies underwent a 4 weeks treatment-free washout period. Moreover, all subjects enrolled underwent a 2 weeks run-in period with tamsulosin 0.4 mg/day alone. Fifty patients enrolled in one center, were treated with tadalafil 5 mg/day plus tamsulosin 0.4 mg/day (TAD+TAM-group) for 12 weeks, otherwise 25 patients enrolled in the other center received tadalafil 5 mg/day plus placebo (TAD+PLA-group). The medications were self-administered every day at the same time, before the night rest, without any limitations or variations of sexual activity timing or food intake. Patients were evaluated at screening, run-in, baseline, and after 12 weeks of treatment (Figure 1).
Safety was assessed by evaluating subject-reported adverse events (AEs), orthostatic vital signs, clinical laboratory parameters, uroflowmetry and PVR.
Patients with incomplete data sets were excluded from statistical analysis.

Differences between tadalafil monotherapy (TAD+PLA-group) and combination therapy (p TAD+TAM-group) were calculated at baseline and 12 weeks, by using the unpaired sample t-test. Instead, the paired sample t-test was adopted to assess mean changes between baseline and week 12 visit in both groups. The one-way analysis of variance (ANOVA) was used to measure the between-group changes from baseline to 12 weeks. All statistical analyses were done with SPSS® (SPSS Inc., Chicago, IL, USA). A p value of 0.05 or less was considered statistically significant.

A Consolidated Standards of Reporting Trials (CONSORT) flow chart is shown in Figure 1. Of 82 subjects enrolled, 75 were screened. All subjects completed the study. Both groups showed a >90% compliance with dosing requirements.
Mean age was 65 years. No significantly differences in baseline characteristics, including IPSS, and the other BPH-related characteristics (Qmax, symptoms score), were observed between the two groups (Table 1). After 12 weeks of treatment from baseline, total IPSS, storage IPSS, IPSS QoL, IIEF-5 and Qmax statistically significantly improved in both groups (all: p < 0.001) (Table 2). Nevertheless, only the subjects in TAD+TAM-group, treated with combination therapy, experienced a statistically and clinically significant recovery of voiding LUTS, with a reduction of −3.5 voiding IPSS points (p < 0.001), when compared with tadalafil monotherapy (−2.0 voiding IPSS points, p = 0.074) (Table 2). No significant differences between TAD+TAM-group and TAD+PLA-group, except for Qmax (p = 0.027) and voiding IPSS (p = 0.006), emerged at between-group ANOVA analysis at week 12 endpoint (Figure 2).
The proportion of subjects reporting at least one treatment-emergent AE (TEAE) was 16% in TAD+PLA-group and 22% in TAD+TAM-group (Table 3). TEAEs were mild to moderate in severity. The most common TEAEs in TAD+PLA-group were headache (n = 2) followed by back pain (n = 1) and nasopharyngitis (n = 1), whereas the most common TEAEs with combination therapy (TAD+TAM) were headache (n = 4), back pain (n = 3), ejaculatory dysfunction (semen volume decreased/retrograde ejaculation) (n = 2), dyspepsia (n = 1) and dizziness (n = 1). Laboratory measurements or vital signs did not show any clinically significant changes. No episodes of urinary retention were reported. No subject discontinued therapy because of TEAEs.

Tadalafil 5 mg daily monotherapy is able to improve ED and overall LUTS (IPSS and Qmax) after 12 weeks. However, the addition of tamsulosin 0.4 mg to tadalafil 5 mg can further enhance the improvement of voiding symptoms and Qmax. Combination therapy is well tolerated. Even if the overall occurrence of ds is slightly higher as compared with tadalafil alone, their low severity allows achieving good compliance and safety.
Further studies, with longer follow-ups, are still required to assess long term efficacy and safety of tadalafil and tamsulosin coadministration. 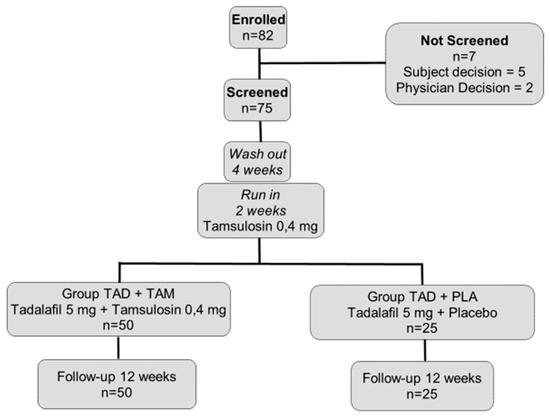 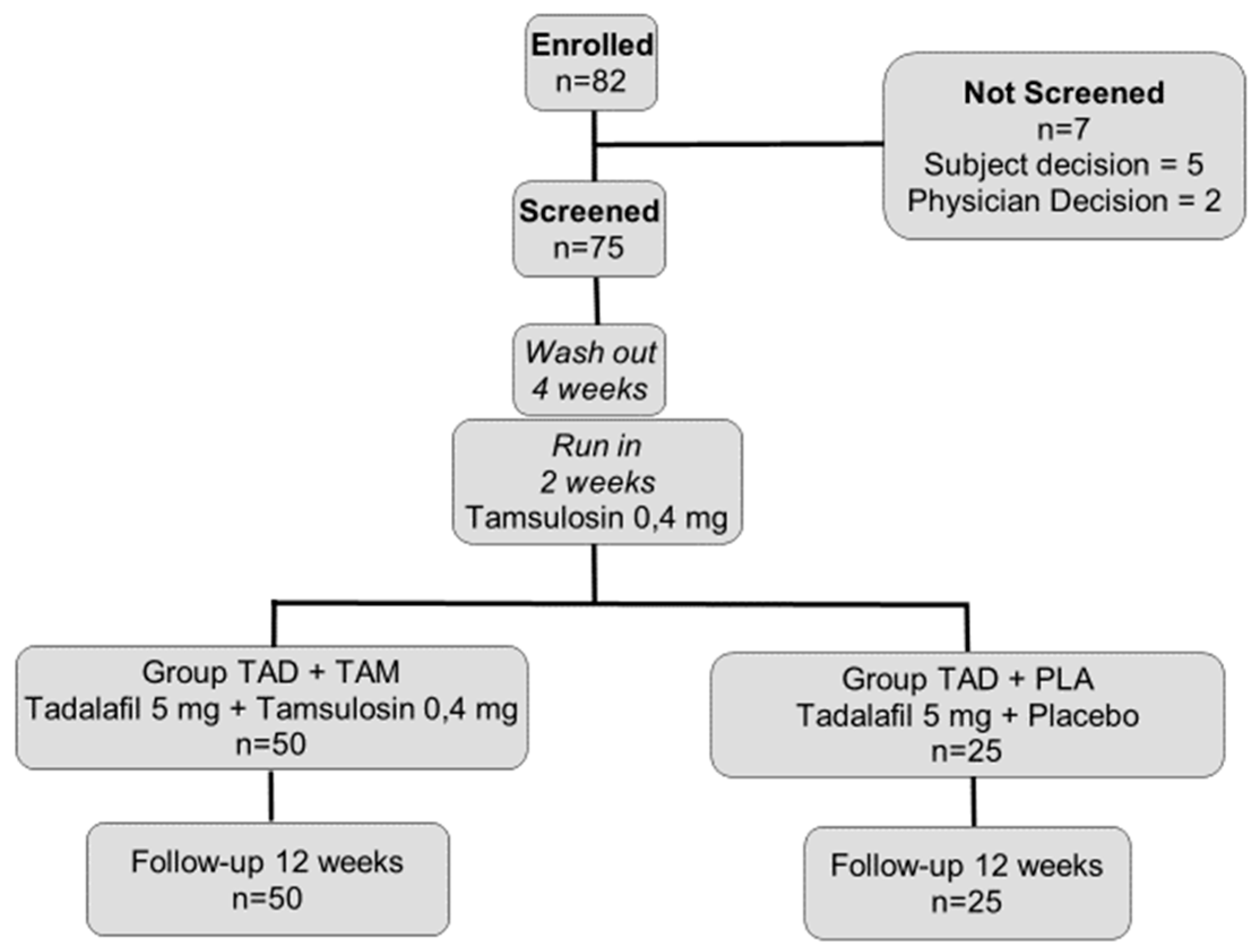 Table 3. Summary of adverse events at treatment period (12 weeks).
Table 3. Summary of adverse events at treatment period (12 weeks).
AEs = adverse events. TEAEs = treatment-emergent adverse events.
© 2019 by the authors. Licensee MDPI, Basel, Switzerland. This article is an open access article distributed under the terms and conditions of the Creative Commons Attribution (CC BY) license (http://creativecommons.org/licenses/by/4.0/).
We use cookies on our website to ensure you get the best experience. Read more about our cookies here.
Accept
We have just recently launched a new version of our website. Help us to further improve by taking part in this short 5 minute survey here. here.
Never show this again