Effect of Statin on Cancer Incidence: An Umbrella Systematic Review and Meta-Analysis

Statins are reported to reduce the risk of cancer, but the results of various published studies have been contradictory. We carried out an umbrella review to provide an overview and understand the strength of evidence, extent of potential biases, and validity of claimed associations between the use of statins and cancer incidence. We comprehensively re-analyzed the data of meta-analyses of randomized controlled trials (RCTs) and observational studies on associations between statin use and cancer incidence. We also assessed the strength of evidence of the re-analyzed outcomes, which were determined from the criteria including statistical significance of the p-value of random-effects, as well as fixed-effects meta-analyses, small study effects, between-study heterogeneity, and a 95% prediction interval. Using a conventional method to assess the significance of meta-analysis (p-value < 0.05), statins had a statistically significant effect on reducing cancer incidence in 10 of 18 types of cancer. When we graded the level of evidence, no cancer type showed convincing evidence, and four cancers (esophageal cancer, hematological cancer, leukemia, and liver cancer) showed suggestive evidence of a preventive effect. There was weak evidence of an association with six cancers, and no significance for the remaining eight cancers. None of the meta-analyses of RCTs on the association of statin and cancer incidence showed a statistical significance. Although there was a preventive effect of statin on cancer incidence in 10 of the 18 cancer types, the evidence supporting the use of statins to reduce cancer incidence was low. Therefore, the associations between statin use and cancer incidence should be carefully considered by clinicians.
Keywords: statin; cancer; meta-analysis; umbrella review statin; cancer; meta-analysis; umbrella review

Cancer places one of the biggest burdens on health care system in both highly developed and less developed countries, and its incidence and mortality have been increasing for decades mainly due to longer life expectancy [1]. Based on cancer statistics, 14.1 million new cancers occurred in 2012, while 8.2 million people died of cancer [2]. Despite the efforts of industry and physicians, overall survival and progression-free survival is still unsatisfactory for most cancer types.
Statins, competitively inhibiting 3-hydroxy-3-methylglutaryl coenzyme A reductase, have been used for lowering cholesterol levels [3]. Because of this effect of statin, statins have proven to be effective in reducing the risk of vascular diseases, such as coronary artery disease and stroke [4,5]. Besides their lipid-lowering effects, statins also exhibit anti-inflammatory, immunomodulatory and antithrombotic effects [6,7,8]. It has been proposed that statins also have anti-tumor effects. The mechanism of anti-tumor effect is poorly understood, but some in vitro studies indicate that statins suppress proliferation of tumor cells and angiogenesis [9,10]. Furthermore, epidemiologic studies, clinical trials and meta-analyses also support this benefit in different types of cancer, yet there is a lack of studies, and conflicting results on the relationship between statin use and cancer incidence [11,12,13].
To understand and evaluate the strength of the evidence of the effect of statins on reducing cancer incidence, we carried out an umbrella review and comprehensively re-analyzed the data of meta-analyses of randomized controlled trials (RCTs) and observational studies.

We performed an umbrella review of meta-analyses and systematic reviews reporting on the associations between statin use and the incidence of cancer. This umbrella review was conducted according to the Preferred Reporting Items for Systematic Reviews and Meta-Analyses (PRISMA) guidelines [14]. The PRISMA checklist is shown in the Supplementary Materials.

We searched the PubMed database and limited the articles to those written in English, regardless of the publication date. The final search was performed in August 2018. The keywords we used were the following: ‘(hydroxymethyl glutaryl-coa reductase inhibitor OR statin) AND (cancer OR neoplasm OR tumor) AND (meta-analysis OR systematic review)’. Meta analyses of either RCTs or observational studies were included in our search strategy. We reviewed the retrieved articles by examining the titles, the abstracts, and the full texts, then decided which article to include or exclude. We further searched the EMBASE database for potentially eligible meta-analyses, but no additional meta-analysis was included because the identified meta-analyses were lacking data necessary for performing re-analysis or overlapped with the PubMed search. The detailed search strategy is presented in Figure 1.

We included meta-analyses and systematic reviews of both RCTs and observational studies reporting on the relationship between statin use and cancer incidence. Observational studies included both cohort and case-control studies. We excluded review articles without meta-analysis, in vitro studies, and genetic studies. We also excluded meta-analyses lacking data necessary for performing re-analysis. If an article presented more than one meta-analysis, all meta-analyses were included and assessed separately by study design or cancer type.
Two investigators (G.H.J. and J.I.S) independently extracted the data, and discrepancies were resolved through consensus. We obtained the data from eligible meta-analyses and extracted and summarized the information on first author, year of publication, the type of cancer, the study design, the number of included studies, the number of cancer cases and total participants, and the random effects with a 95% confidence interval (CI). From the eligible studies, we also extracted the raw data of each individual study for further meta-analysis by combining all data by cancer and study design. If a single study consisted of both RCTs and observational studies, we separated the studies according to the study types (RCTs, observational studies, case-control, and cohort) and reported the results separately.

For each meta-analysis, we re-analyzed the individual studies and estimated the summary effects and 95% CI using both random- and fixed-effects methods [15]. We also calculated and presented the 95% prediction interval (PI), which address the dispersion of effects (in 95% of cases the true effect in a new study will fall within the PI) and further account for between-study heterogeneity [16], whereas CI reflects the accuracy of the mean.

We assessed heterogeneity across the studies using the I2 metric of inconsistency and the p value of the X2-based Cochrane Q test. I2 values of <50%, 50%–75%, and >75% are usually judged to represent low or moderate, large and very large heterogeneity, respectively [17].
Publication bias was evaluated by using Egger’s regression test [18]. Small study effects were used for detecting publication and reporting bias [19,20]. When the Egger’s test was significant (p-value < 0.10) in random-effects meta-analyses, we decided that the study has small-study effects.

2.6. Determination of the Level of Evidence

3.1. Characteristics of Studies Included in the Final Analyses

First, we summarized and re-analyzed the results of the previously reported meta-analysis for each stain-cancer incidence association, but there were sometimes discordant results among the meta-analyses of same statin-cancer association. Therefore, we pooled all the individual RCTs and observational studies extracted from eligible studies without missing or overlapping any studies and performed re-meta-analysis in 18 types of cancer to reach a final conclusion of association between statin use and the incidence of one cancer type. Among these, 10 associations (esophageal cancer, hematological cancer, leukemia, liver cancer, breast cancer, colorectal cancer, gastric cancer, lung cancer, lymphoma, and prostate cancer) were statistically significant under the conventional interpretation of meta-analysis criteria (p < 0.05), while eight associations (bladder cancer, endometrial cancer, gynecological cancer, kidney cancer, melanoma, myeloma, pancreatic cancer, and non-melanoma skin cancer) were not significant (Table 1).
When associations of the meta-analysis summary effect sizes were analyzed with an inverse of the variance, meta-analyses with small variances showed a trend of summary effects towards 1.00 in cancer incidence, as shown in Figure 2.

3.3. Assessing the Statin Effect on Cancer Incidence with Criteria by Previous Umbrella Review

We determined the level of evidence by not only using random effect p-values but also by using between-study heterogeneity, small study effects, and 95% PI according to the methods previously published [21]. Under the suggested criteria, we found that none of the associations showed convincing evidence, four associations (esophageal cancer, hematological cancer, leukemia and liver cancer) were found to show suggestive evidence. Six associations (breast cancer, colorectal cancer, gastric cancer, lung cancer, lymphoma, and prostate cancer) showed weak evidence. Details of the graded associations are presented in Table 1.

In addition to the above process, we performed subgroup analyses of eligible meta-analyses by study designs (RCTs and observational studies) and carried out a re-meta-analysis of the pooled raw data in association with statin use and cancer incidence (Table 2). All overlapping individual studies were omitted while pooling the raw data. Details of the individual overlapping meta-analyses with different study designs on associations with statin and cancer incidence are summarized in Table 3
Of the 18 types of cancer, three cancer types (leukemia, lymphoma, and myeloma) did not have meta-analyses using RCTs. Among the other 15 cancer types, there was no statistically significant statin–cancer incidence association in meta-analyses of RCTs (Figure 3). For the 18 observational studies, four cancers (esophageal cancer, hematological cancer, leukemia, and liver cancer) showed suggestive evidence, seven cancers (breast cancer, colorectal cancer, gastric cancer, lung cancer, lymphoma, prostate cancer and non-melanoma skin cancer) showed weak evidence, and seven cancers (bladder cancer, endometrial cancer, gynecological cancer, kidney cancer, melanoma, myeloma and pancreatic cancer) were not statistically significant. Therefore, the most significant results of statin-cancer associations were determined by the results of the observational studies.

The following are available online at https://www.mdpi.com/2077-0383/8/6/819/s1, Table S1. Reanalysis of each meta-analysis on associations of the use of statin and the incidence of cancers, Table S2. PRISMA checklist 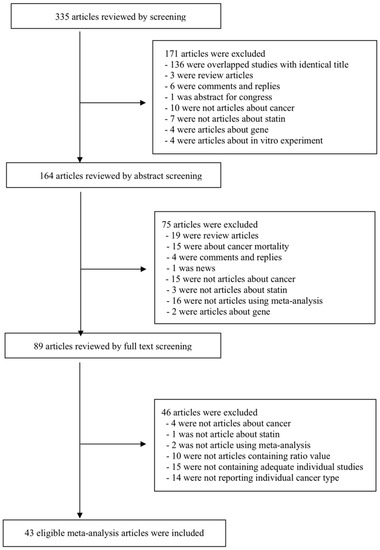 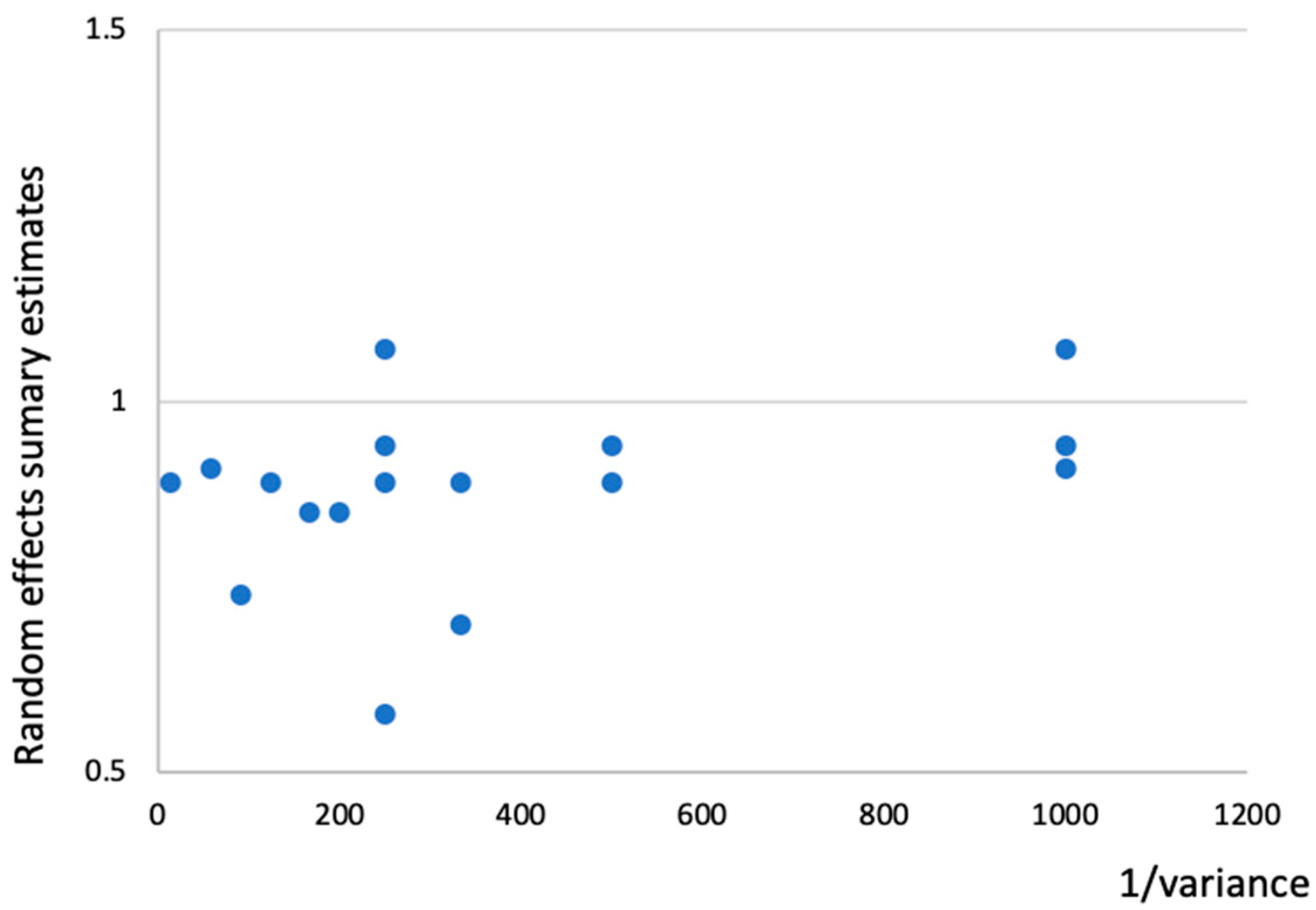 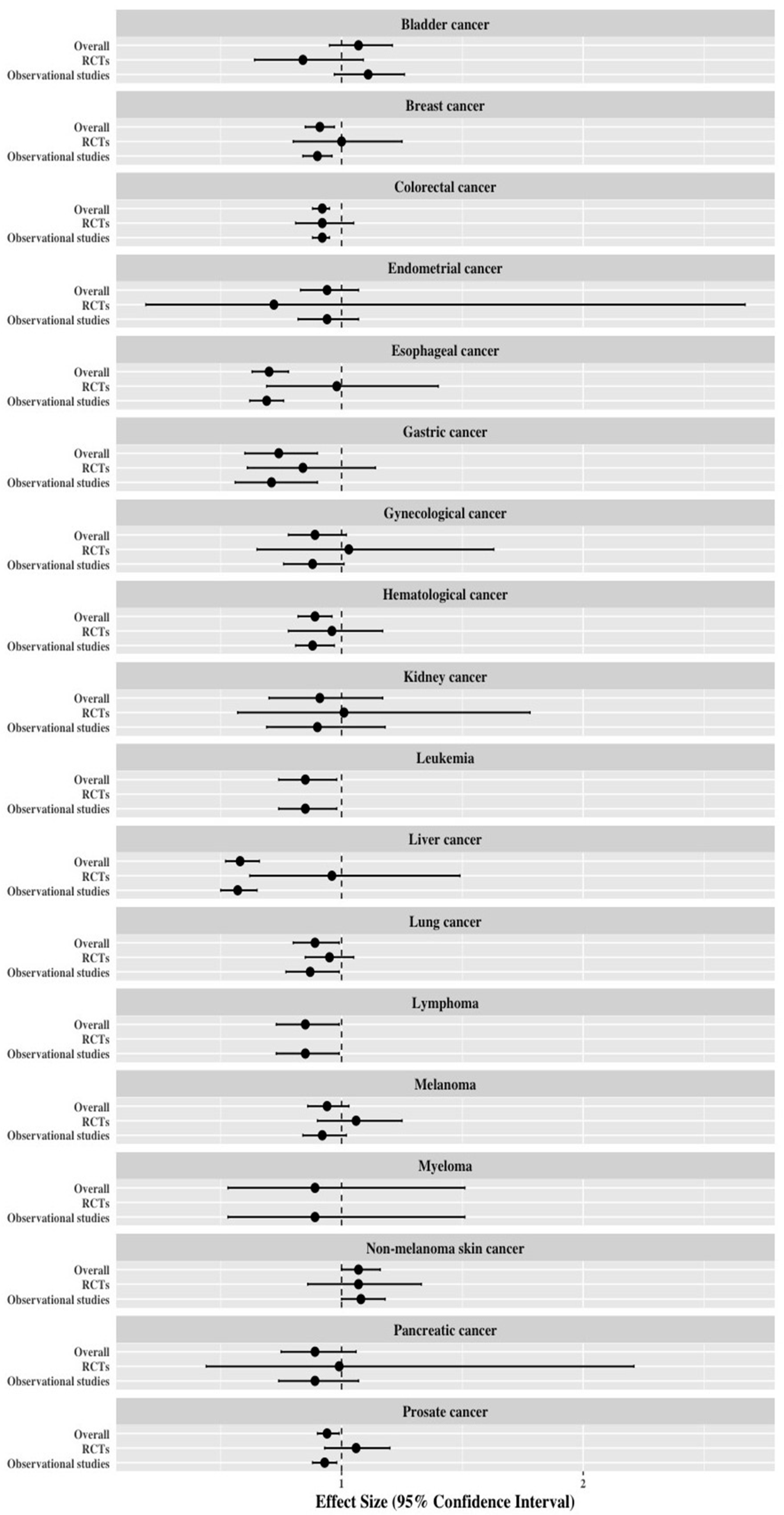