Genome-Wide Association between the 2q33.1 Locus and Intracranial Aneurysm Susceptibility: An Updated Meta-Analysis Including 18,019 Individuals
Previous Article in Special Issue

The present study is centered on molecular mechanisms of the cytoprotective effect of geranylgeraniol (GGOH) in skeletal muscle harmed by statin-associated myopathy (SAM). GGOH via autophagy induction was purportedly assumed to prevent skeletal muscle viability impaired by statins, atorvastatin (ATR) or simvastatin (SIM). The C2C12 cell line was used as the ‘in vitro’ model of muscle cells at different stages of muscle formation, and the effect of ATR or SIM on the cell viability, protein expression and mitochondrial respiration were tested. Autophagy seems to be important for the differentiation of muscle cells; however, it did not participate in the observed GGOH cytoprotective effects. We showed that ATR- and SIM-dependent loss in cell viability was reversed by GGOH co-treatment, although GGOH did not reverse the ATR-induced drop in the cytochrome c oxidase protein expression level. It has been unambiguously revealed that the mitochondria of C2C12 cells are not sensitive to SIM, although ATR effectively inhibits mitochondrial respiration. GGOH restored proper mitochondria functioning. Apoptosis might, to some extent, explain the lower viability of statin-treated myotubes as the pan-caspase inhibitor, N-Benzyloxycarbonyl-Val-Ala-Asp(O-Me) fluoromethyl ketone (Z-VAD-FMK), partly reversed ATR- or SIM-induced cytotoxic effects; however, it does not do so in conjunction with caspase-3. It appears that the calpain inhibitor, N-Acetyl-L-leucyl-L-leucyl-L-norleucinal (ALLM), restored the viability that was reduced by ATR and SIM (p < 0.001). GGOH prevents SAM, in part, as a consequence of a caspase-3 independent pathway, probably by calpain system inactivation. View Full-Text
Keywords: skeletal muscle cell viability; statins; myotoxicity; geranylgeraniol; water-soluble cholesterol; statin-associated myopathy; mitochondrial bioenergetics skeletal muscle cell viability; statins; myotoxicity; geranylgeraniol; water-soluble cholesterol; statin-associated myopathy; mitochondrial bioenergetics
►▼ Show Figures 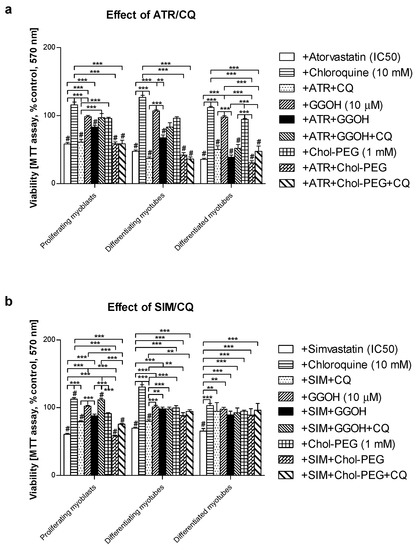