Recent Trends in the Quantification of Biogenic Amines in Biofluids as Biomarkers of Various Disorders: A Review

It is known that cigarette smoking is correlated with medical associated inquires. New electronic cigarettes are intensively advertised as an alternative to conventional smoking, but only a few studies demonstrate their harmful potential. A cross-sectional study was designed using 150 subjects from Brasov (Romania), divided into three groups: non-smokers (NS = 58), conventional cigarettes smokers (CS = 58) and electronic cigarettes users (ECS = 34). The aim of this study was to determine levels of some plasma lipophilic and hematological components, and the total antioxidant status that could be associated with the smoking status of the subjects. Serum low density lipoproteins (LDL) cholesterol increased significantly for ECS participants versus NS group (18.9% difference) (p < 0.05). Also, the CS group is characterized by an increase of serum LDL cholesterol (7.9% difference vs. NS), but with no significant statistical difference. The variation of median values of serum very low density lipoproteins (VLDL) was in order NS < ECS < CS, with statistical difference between NS and CS groups (34.6% difference; p = 0.023). When comparing the antioxidant status of the three groups, significant differences (p < 0.05) were obtained between NS vs. CS and NS vs. ECS. Similar behavior was identified for CS and ECS. Statistically significant changes (p < 0.0001) for both vitamin A and vitamin E were identified in the blood of NS vs. CS and NS vs. ECS, and also when comparing vitamin A in the blood of the CS group versus the ECS group (p < 0.05). When all groups were compared, the difference in the white blood cell (WBC) was (p = 0.008). A slight increase in the red blood cell (RBC) count was observed, but with no statistical difference between groups. These results indicated that conventional cigarette and e-cigarette usage promotes the production of excess reactive oxygen species, involving different pathways, different antioxidants and bioactive molecules. View Full-Text
Keywords: conventional smokers; electronic cigarettes users; plasma lipophilic components; oxidative stress conventional smokers; electronic cigarettes users; plasma lipophilic components; oxidative stress
►▼ Show Figures 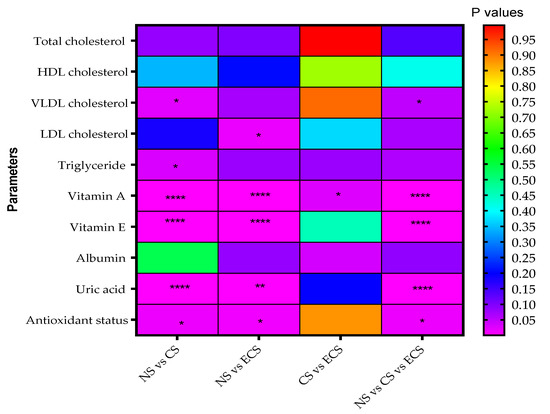