iPS-Cell Technology and the Problem of Genetic Instability—Can It Ever Be Safe for Clinical Use?

Hypertension (HTN) is a complex disease with interactions among multiple organ systems, including the heart, vasculature, and kidney with a strong heritable component. Despite the multifactorial nature of HTN, no clinical guidelines utilize a multi-gene approach to guide blood pressure (BP) therapy. Non-smokers with a family history of HTN were included in the analysis (n = 384; age = 61.0 ± 0.9, 11% non-white). A total of 17 functional genotypes were weighted according to the previous effect size in the literature and entered into an algorithm. Pharmacotherapy was ranked from 1–4 as most to least likely to respond based on the algorithmic assessment of individual patient’s genotypes. Three-years of data were assessed at six-month intervals for BP and medication history. There was no difference in BP at diagnosis between groups matching the top drug recommendation using the multi-gene weighted algorithm (n = 92) vs. those who did not match (n = 292). However, from diagnosis to nadir, patients who matched the primary recommendation had a significantly greater drop in BP when compared to patients who did not. Further, the difference between diagnosis to current 1-year average BP was lower in the group that matched the top recommendation. These data suggest an association between a weighted multi-gene algorithm on the BP response to pharmacotherapy. View Full-Text
Keywords: hypertension; blood pressure; genetics; pharmacogenetics; pharmacotherapy; treatment hypertension; blood pressure; genetics; pharmacogenetics; pharmacotherapy; treatment
►▼ Show Figures 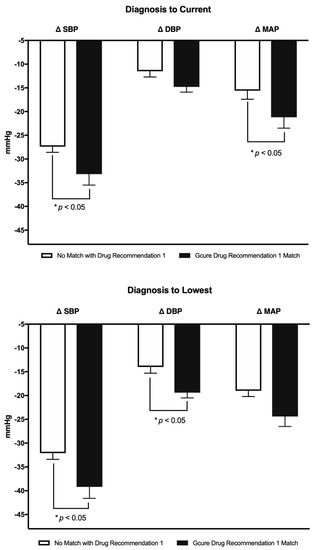