Medication in AN: A Multidisciplinary Overview of Meta-Analyses and Systematic Reviews
Previous Article in Journal

The sample consisted of 62 male participants diagnosed with ED (16-AN, 12-BN, 15-BED, 19-Other Specified Feeding or Eating Disorder (OSFED)), 656 female ED patients (140-AN, 236-BN, 100-BED, 180-OSFED), and a HC group, 286 females and 78 males, without a history of ED. The clinical groups were consecutively referred for assessment and treatment at the Eating Disorders Unit within the Department of Psychiatry at Bellvitge University Hospital in Barcelona, Spain. All patients were diagnosed according to the DSM-5 [37] criteria and assessed by senior clinicians specialized in ED. All HC came from the same catchment area as the patients. Participants were recruited between May 2013 and July 2018. In accordance with the Declaration of Helsinki, the present study was approved by the Ethics Committee of our institution (The Clinical Research Ethics Committee (CEIC) of Bellvitge University Hospital). All the participants provided signed informed consent.

Statistical analysis was carried out with Stata15 for Windows. The comparison of quantitative variables between the groups was based on analysis of variance adjusted for the participants’ age, education level, and civil status (ANCOVA). The estimation of the effect size of the pairwise comparisons was based on Cohen’s-d coefficients (|d| > 0.20 was considered low, |d| > 0.5 was considered moderate, and |d| > 0.8 was considered high) [52]. In addition, Finner’s procedure (a familywise error rate stepwise method which has demonstrated more powerful than Bonferroni correction) controlled the increase in Type-I error due to multiple comparisons [53].
Linear multiple regressions stratified by sex estimated the predictive capacity of clinical measures (defined as the independent variables) on ER (defined as the criterion, DERS total score). Each regression was adjusted in five blocks/steps: (a) First block-step entered and set the covariates participants’ age, education, and civil status; (b) Second block added ED-related variables (EDI-2 total, onset of the ED, and duration of the ED); (c) The third block included global psychopathological state (SCL-90R GSI); (d) The fourth block entered NSSI (0 = absent; 1 = present); and (e) The fifth block included personality traits (TCI-R scale scores). The specific predictive capacity of each step/block was measured as the increase in the R2 coefficient (∆R2).
Pathways analysis assessed the underlying mechanisms of the following study variables: Participants’ sex and age, personality traits, EDI-2 total score, SCL-90-R GSI and DERS scale scores. This method constitutes an extension of multiple regression modeling, which aims to estimate the magnitude and significance of hypothesized associations in a set of variables with the advantage of allowing for the testing of mediational links (direct and indirect effects) [54]. Structural equation modeling (SEM) was used by defining the maximum-likelihood estimation of parameter estimation and testing goodness-of-fit through standard statistical measures: The root mean square error of approximation (RMSEA), Bentler’s Comparative Fit Index (CFI), the Tucker-Lewis Index (TLI), and the standardized root mean square residual (SRMR). Adequate model fit was considered non-significant by χ2 tests and if the following criteria were met [55]: RMSEA < 0.08, TLI > 0.9, CFI > 0.9 and SRMR < 0.1. In this study, ER was defined as a latent variable defined by DERS scale scores, and the personality profile as a latent class defined by TCI-R scale scores.

Table 1 includes the description and the comparison between the four groups of the study defined by ED diagnosis and sex. Differences emerged with regards to civil status, education and age.

3.2. ER and Negative Affect Measures and Comparison between Groups

The first block of Table 2 includes the results of the ANCOVA (adjusted forage, civil status, and education) comparing the four study groups (ED-women, ED-men, HC-women, and HC-men) with regard to DERS scales, EDI-2 scales, and the binge-eating/purging levels (these two last measures were only compared between ED groups). Pairwise comparisons between ED-women and ED-men reached significance in all measures (more ER difficulties for ED-women), except for DERS awareness and the EDI-2 interpersonal distrust (no differences between the two groups were obtained). ED-women registered higher mean scores in all the measures compared to HC-women. The same occurred with ED-men compared to HC-men (except for on EDI-2 perfectionism). No differences between the two HC groups (women and men) were found.
The second block of Table 2 contains the prevalence of NSSI and the comparison between the groups (comparison between the groups was based on logistic regression adjusted by the participants’ age, education, and civil status). The proportion of ED-women who reported the presence of this behavior was higher than the proportion reported by ED-men (44.2% vs. 16.1%, p < 0.001), as well as the proportion reported by the HC-women (44.2% vs. 21.8%, p < 0.001). No significant differences were found comparing the HC groups (women and men) or between ED-men and HC-men.
Figure 1 includes a radar-chart for the study variables in the four groups. To allow for easy interpretation, z-standardized means were plotted.

3.3. Comparison of ER between ED Subtypes

Table 3 includes the ANCOVA (also adjusted for age, education, and civil status) comparing DERS scores between the ED types (AN, BN, BED, and OSFED), stratified by sex. In the female subsample as a whole, greater ER difficulties were associated with BN, followed by BED and OSFED. The lowest DERS scores were found in AN. In the male subsample, greater ER difficulties were registered in OSFED group, followed by the BN and BED groups. AN males had the lowest DERS scores. Results obtained in the men subsample must be interpreted with caution due to the low sample size of the groups.

3.4. Predictive Capacity of the Study Variables on ER

Table 4 includes the final models of the two multiple regressions measuring the predictive capacity of study variables on the DERS total score. In the ED-females model, emotion regulation difficulties were predicted by higher EDI-2 total scores, more pronounced psychopathology, higher levels in the novelty seeking and cooperativeness traits, and lower levels in the reward dependence and self-directedness traits. No significant predictive contribution of the NSSI on the DERS-total was found in the ED-females group.
For the ED-males model, DERS-total scores increased for men who reported higher scores on the EDI-2, those with higher psychopathology and lower levels in persistence.

Figure 2 includes the path-diagram with the standardized coefficients of the SEM obtained in the ED group (Table S1, supplementary material, includes the complete results valuing direct, indirect. and total effects). Goodness-of-fit was obtained (all the fit statistics were in the adequate range). The latent variable measuring ER difficulties (labeled as DERS in the figure) was directly increased for patients who presented higher ED severity (higher EDI-2 total), higher psychopathology (higher SCL-90R GSI), and who were younger. Higher scores in the latent variable measuring the personality construct (labeled as TCI-R in the figure) were also direct predictors of greater ER difficulties. ED severity and the psychopathology levels mediated the relationships between personality measures and ER, as well as between sex and ER: Higher levels in the TCI-R construct and being female increased EDI-2 interoceptive awareness and SCL-90R scores, which contributed to increases on the DERS.

The present study should be evaluated within the context of its limitations. First, as we only assessed patients with ED that were seeking treatment in a clinical setting, the patient cohorts may not be representative of all patients with ED. In addition, ER difficulties were assessed by means of the DERS. Although this is a validated instrument for the assessment of ER, it may not capture other relevant aspects of ER, such as ER strategies or skills (e.g., reappraisal, stimulus control, etc.). Finally, due to the study’s cross-sectional design, no conclusions can be drawn with regard to response to treatment between genders.
Notwithstanding these limitations, the current study has also several strengths that should be noted. One of the strengths of our study includes the relatively large number of males with ED in our sample and our comparison with females with ED, as well as with male and female healthy controls. For the first time, we addressed ER in a large sample of males with ED, including different DSM-5 types. As far as we know, this is the first study assessing predictors of difficulties in ER in females and males with ED.

There is a growing interest in addressing difficulties in ER in the treatment of patients with ED. However, most ER-based studies were performed in females with ED and, to date, no study was carried out in males with all DSM-5 ED diagnoses. Our findings suggest that treatments focusing on enhancing ER abilities are likely to be beneficial to both female and male patients with ED. Our findings also suggest a bidirectional relationship, that is, if we improve eating symptomatology and general psychopathology, we could improve ER in these patients. However, our results also provide evidence for the need to design specific treatments for males and females with ED that address shared and differential gender-related features associated to emotion dysregulation, such as impulsivity and reward dependence in females, and persistence in males with ED. Taking into account all of the aforementioned factors, further research should be addressed to validate and complement our results, including other measures of ER. Likewise, longitudinal designs may offer insight into gender-related responses of ER difficulties to ED treatments. Findings of this kind may, in fact, provide further evidence for the need of gender-specific, ER-centered treatments as a further step toward individualized psychotherapy. 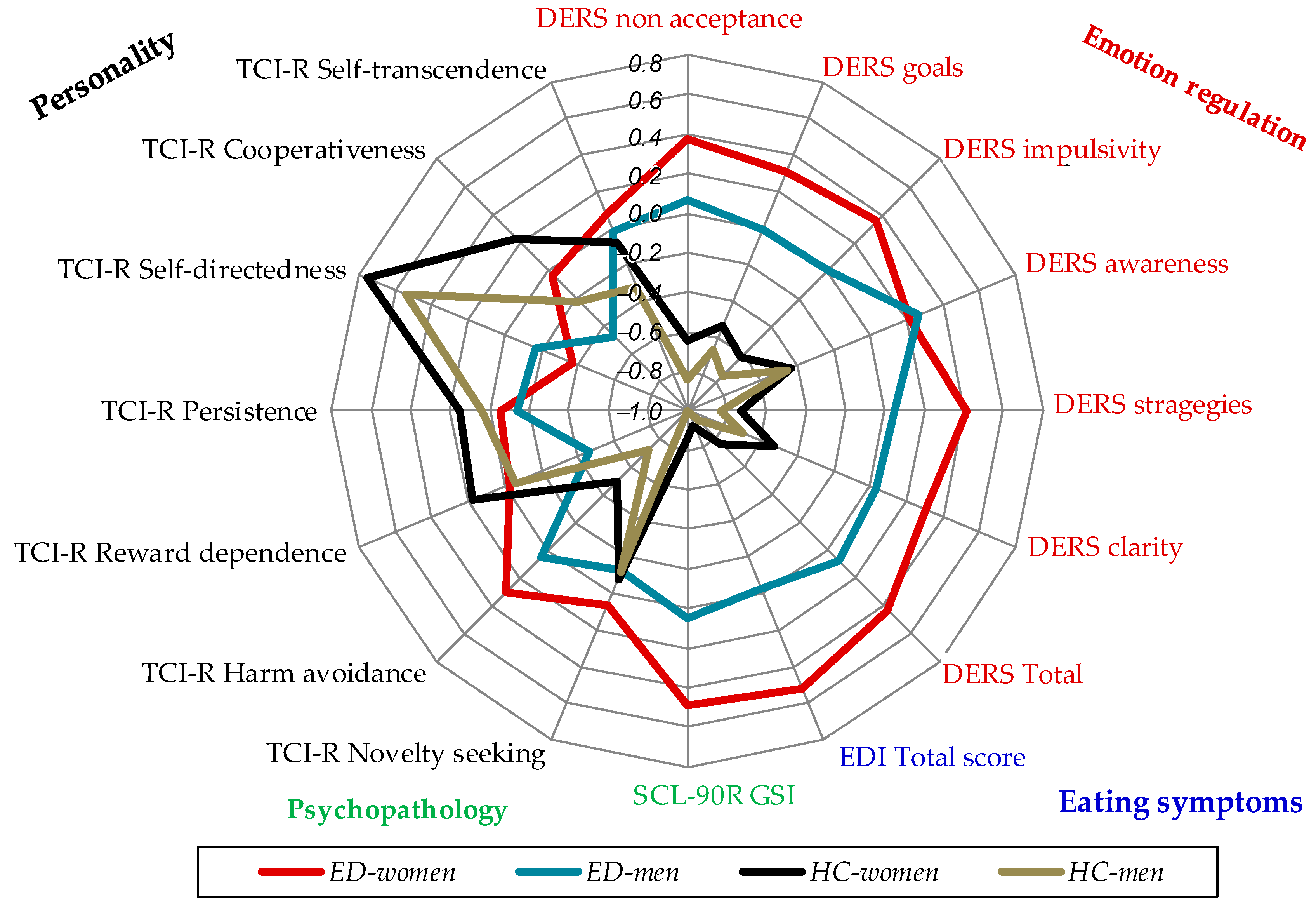