Results from the Adverse Event Sedation Reporting Tool: A Global Anthology of 7952 Records Derived from >160,000 Procedural Sedation Encounters
Next Article in Special Issue

Ulcerative colitis is a relatively frequent, chronic disease that impacts significantly the patient’s quality of life. Although many therapeutic options are available, additional approaches are needed because many patients either do not respond to current therapies or show significant side effects. Cardiotrophin-1 (CT-1) is a cytokine with potent cytoprotective, anti-inflammatory, and antiapoptotic properties. The purpose of this study was to assess if the administration of CT-1 could reduce colon damage in mice with experimental colitis was induced with 5% dextran sulfate sodium (DSS) in the drinking water. Half of the mice received an i.v. dose of CT-1 (200 µg/kg) 2 h before and 2 and 4 days after DSS administration. Animals were followed during 7 days after DSS administration. The severity of colitis was measured by standard scores. Colon damage was assessed by histology and immunohistochemistry. Inflammatory mediators were measured by Western blot and PCR. CT-1 administration to DSS-treated mice ameliorated both the clinical course (disease activity index), histological damage, inflammation (colon expression of TNF-α, IL-17, IL-10, INF IFN-γ, and iNOS), and apoptosis. Our results suggest that CT-1 administration before induction of colitis improves the clinical course, tissue damage, and inflammation in DSS-induced colitis in mice.
Keywords: apoptosis; cardiotrophin-1; colon; inflammation apoptosis; cardiotrophin-1; colon; inflammation

Ulcerative colitis (UC) is a chronic, inflammatory bowel disease that disrupts colon structure and function. UC affects mainly young patients and is characterized by alternation of acute and remission phases. UC is associated with a higher incidence of dysplasia and colorectal cancer, and can impact significantly the patients’ quality of life and working ability [1,2]. UC is most prevalent in northern Europe, especially in the United Kingdom and Scandinavia [3,4] and North America [5], whereas Asia is also expected to reach highest incidence over the next decade [6]. UC affects the colonic mucosa and submucosa with widespread superficial ulceration, destruction of epithelial architecture and integrity, crypt loss, submucosal edema, cellular infiltration, and intense inflammation [7]. Although the precise mechanisms are not yet fully understood, several mediators, including chemotactic peptides and pro-inflammatory cytokines are known to be involved [8].
Current therapies for UC include many agents targeting different pathways involved in the induction of the disease. These agents comprise 5-aminosalicylic acid (5-ASA) precursors, such as Sulfasalazine, Mesalamine, and Budesonide, systemic (oral or intravenous) corticosteroids, thiopurines with steroid-sparing effects such as Azathioprine and 6-mercaptopurine, anti-TNF-α antibodies such as Infliximab, Adalimumab, and Golimumab, calcineurin inhibitors such as cyclosporine, anti-integrin antibodies such as Vedolizumab, Janus kinase inhibitors such as Tofacitinib and other similar molecules, and many combinations thereof. All these therapeutic approaches, their clinical use and side effects have been evaluated in several recent reviews [9,10,11], as well as briefly discussed in the Discussion section of this article. All these reviews suggest that additional treatments focused on new targets are necessary due to the serious limitations of available options.
In the present study, we assessed the utility of cardiotrophin-1 (CT-1) in an experimental model of dextran sulfate sodium (DSS)-induced colitis in mice. CT-1 is a member of the interleukin 6 (IL-6) family of cytokines, also including many other cytokines [12]. CT-1 binds to and signals through a specific membrane receptor complex containing glycoprotein 130 (gp130) and leukemia inhibitory factor receptor (LIFR) [13,14]. CT-1 is expressed in a variety of cell types and tissues and exerts potent anti-apoptotic effects on hepatocytes [15], cardiomyocytes [16] and neurons [17], and protective and anti-inflammatory effects in damaged hearts [18,19], livers [20,21], kidneys [22,23], and the nervous system [17]. Recently, we have reported that exogenous CT-1 attenuates experimental colitis in mice, when administered after the insult, suggesting a potential application in the treatment of ongoing relapses [24]. We now show that CT-1 is also able to partially prevent the development of DSS-induced experimental colitis in mice when administered before the insult, thus suggesting a potential additional prophylactic application.

Unless otherwise indicated, all reagents were purchased from Sigma-Aldrich (Madrid, Spain).

Twenty-five eight-week-old male mice purchased from Charles River Spain (Barcelona, Spain) were used. Only male littermates were used in order to obviate the interference of estrus. Animals were group-housed in a temperature and humidity-controlled room, with a 12-h dark/12-h light cycle (Experimental Animal Facility, University of Salamanca), and allowed free access to standard chow and tap water.

All protocols were approved by the Animal Experimentation Ethics Committee of the University of Salamanca and were carried out in accordance with the Guide for the Care and Use of Laboratory Animals (NRC USA, 2011), the European Convention for the Protection of Vertebrate Animals Used for Experimental and Other Scientific Purposes, Council of Europe (ETS 123), and Spanish Government “Ley para el cuidado de los animales, en su explotación, transporte, experimentación y sacrificio” (Law 32/2007, November 7, 2017, BOE. 268, pp 45914-45920).

DSS administration is a most widely used animal model for the study of UC, for its simplicity, reproducibility, and uniformity [25]. The DSS model exhibits many symptoms similar to those seen in human UC, such as diarrhea, bloody feces, body weight loss, mucosal ulceration, and shortening of the colorectum [26].
C57BL/6J mice were randomly distributed into three groups:
The dose of CT-1 chosen is the lowest with significant effects in reducing the major symptoms in mice with DSS-induced colitis (according to our preliminary studies). Animals were followed during 7 days after starting DSS.
To assess the effects of DSS, potential behavioral alterations and changes in body weight were checked daily. Mice were euthanized when showing excessive suffering, appearing moribund, or weight loss ≥20%. At the end of the study, mice were anesthetized with 60 mg/kg pentobarbital and blood was obtained by heart puncture. Then, animals were perfused through the cardiac puncture with heparin containing (5 IU/mL) isotonic saline and the colon was dissected and cleaned. Colons were immediately trimmed out into pieces and some of the specimens were fixed in buffered 4% formaldehyde for 24 h for histological studies, whereas others samples were frozen in liquid nitrogen for biochemical measurements.

Fixed colon tissue specimens were dehydrated in ascending graded ethanol concentrations (70, 80, 90, 95, 95, 100, 100–40 min in each), followed by 25 min in xylene and 30 min in paraffin. For light microscopy, 3 µm sections were stained with hematoxylin and eosin. Additional 3 μm sections were processed for immunohistochemistry as previously reported [24]. In brief, sections were deparaffined in xylene and rehydrated in descending graded ethanol concentrations. Endogenous peroxidase was blocked with 3% hydrogen peroxide, followed by primary antibody incubation. Primary antibodies used are described in Table 1.
Then, sections were washed three times in PBS and incubated with the Novolink Polymer Detection ® (RE7140-K, Novocastra, MA, USA), followed by reaction with 3,3′-diaminobenzidine as chromogen. Ten images per slide were captured with an optical microscope. Then, images were digitalized and the number of cells stained by the antibodies was quantified with the ImageJ software (Rasband, W.S., ImageJ, National Institutes of Health, Bethesda, MD, USA).

Total RNA was isolated from frozen colon samples using Nucleospin RNAII (Macherey-Nagel, Düren, Germany), according to the manufacturer’s instructions. Single-strand cDNA was generated with the M-MLV reverse transcriptase (Promega Biotech Ibérica, Alcobendas, Spain) from 2 μg of total RNA using poly-dT as a primer.
Quantitative RT-PCR was performed in triplicate. Each reaction was carried out in a volume of 20 μL containing 1 μL of cDNA, 400 nM of each primer, and 1x iQ Sybr Green Supermix (Bio-Rad, Madrid, Spain). PCR products were separated by electrophoresis in a 1% agarose gel and visualized using Invitrogen SYBR Safe DNA Gel Stain (Thermo Fisher Scientific, Carlsbad, CA, USA). Standard curves were obtained for each transcript to ensure exponential amplification and to rule out non-specific amplification. Gene expression was normalized to GAPDH expression. The reactions were studied with an iQ5 real-time PCR detection system (Bio-Rad, Madrid, Spain). The specific primers used for PCR are shown in Table 2.

The area under the curve (AUC) was calculated in each animal by adding the areas of contiguous trapezes. Statistical analysis was performed using the NCSS software. Data showing normal distribution are expressed as mean ± SEM. One-way or two-way analysis of variance was used to evaluate differences between groups, and Scheffe’s post-hoc test was performed for multiple group comparisons. Data without normal distribution are shown as medians. For group comparisons, the Kruskal–Wallis Z value test was used. P < 0.05 or Z > 1.96 were considered statistically significant.

Hematoxylin-eosin staining of colon specimens revealed that mice treated with DSS showed typical alterations of ulcerative colitis. Ulcers were focally distributed through the inner surface of the colon and invaded the entire thickness of the colon wall, even penetrating the lamina propria. In ulcerated areas, total crypt destruction and epithelial loss were seen, including goblet cells. Granulation tissue and a large transmural inflammatory infiltrate occupied the ulcerated zones (Figure 1C). Peripheral tissue surrounding colonic ulcers showed normal structure, without alterations. In mice treated with DSS plus CT-1, even though ulcers were observed, mainly in the distal colon, these were fewer than those found in the control group and their size was also smaller. In many areas, although an infiltration of inflammatory cells was occasionally detected, the epithelium of the colon mucosa appeared fairly well preserved, including goblet cells, and most of the colon had no structural alterations (Figure 1D). Hematoxylin-eosin-stained, proximal colon sections from the sham group showed intact epithelium, well defined crypt length, absence of edema or infiltrating cells in the mucosa and submucosa, and no ulcers or erosions (Figure 1E).

Our data demonstrate that CT-1 administration before the induction of UC with DSS, ameliorates both the clinical course and the histological damage in the colon. This effect seems to be mediated by direct attenuation of inflammation and apoptosis, and activation of the Stat-3 and NF-κB pathways. Thus, acute therapy with CT-1 could also be envisaged as a potential, new therapeutic tool against UC relapse.

This study was supported in part by grants from Digna Biotech and Fundación Salmantina para el Estudio de las Enfermedades Hepáticas to Bio-inRen S.L., by grants from Junta de Castilla y Leon (ref: GRS 1217/A/15 to AR-P, and GR-100 to JML-N), and by an internal grant of the Biomedical Research Institute of Salamanca (IBSAL) to AR-P.

We wish to thank Juan Ruiz (Digna Biotech, Pamplona, Spain) for helping in the design of the study, Angustias Pérez and Marta Ortiz for their technical assistance in histological studies, and Jose I. Sanchez-Gallego for his technical collaboration.

All authors have read the journal’s policy on disclosure of potential conflicts of interest. The authors declare that they have no conflict of interest. Juan Ruiz (Digna Biotech, Pamplona, Spain) collaborated in the design of the study. The sponsors had no role in the execution, interpretation, or writing of the study. 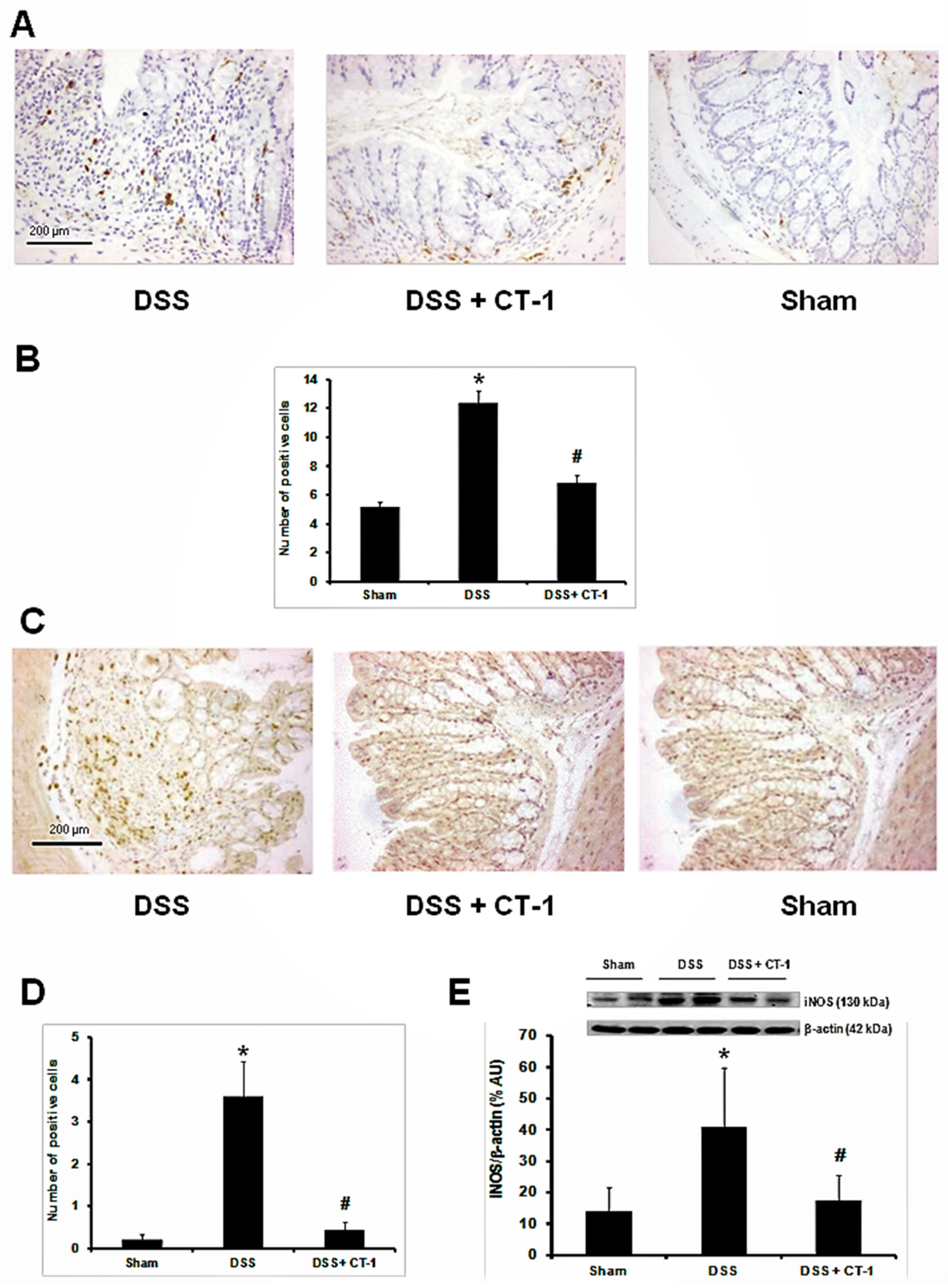 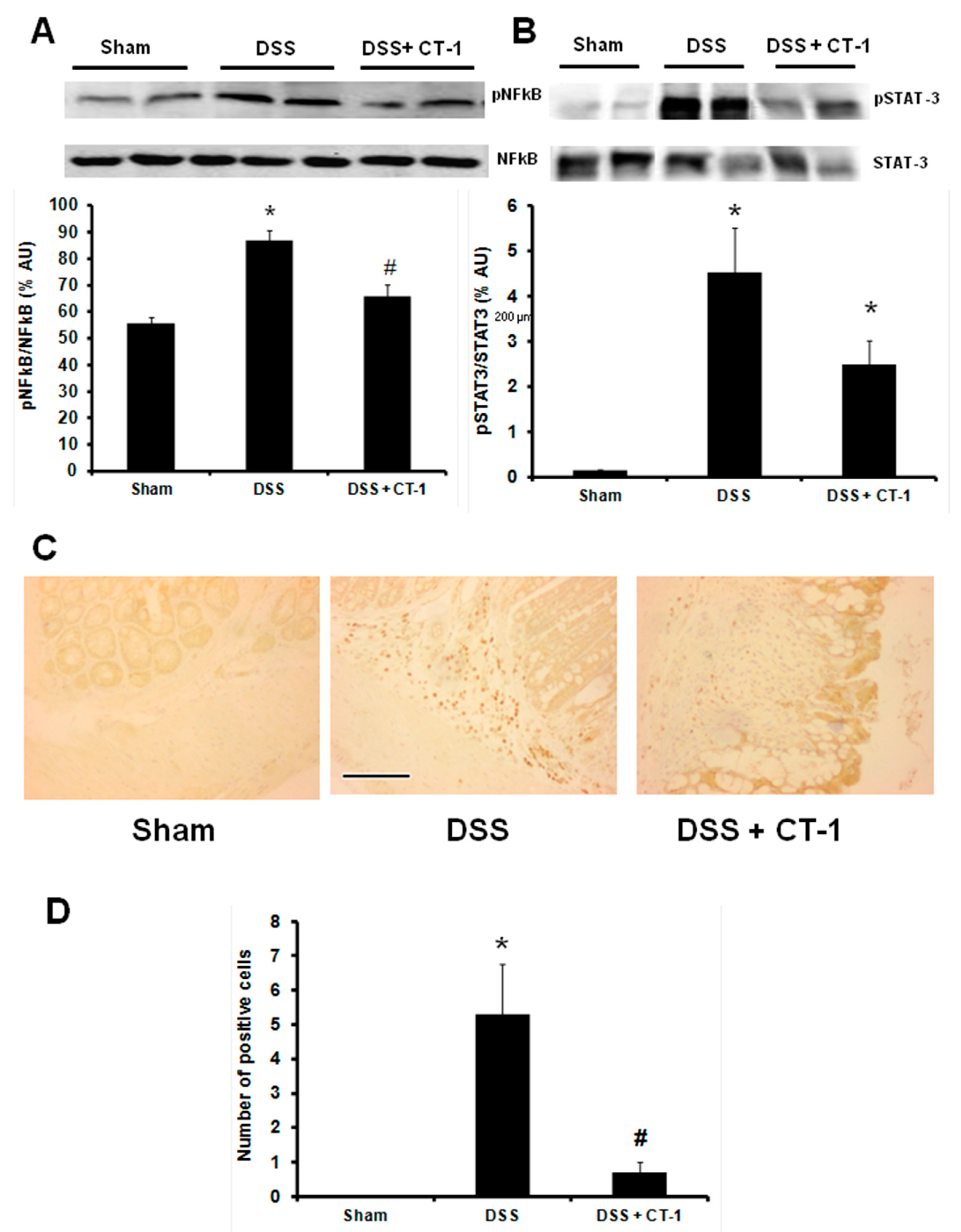