Osteopathic manual treatment has been recommended as a non-pharmacological therapy for Gastroesophageal Reflux Disease (GERD). However, to date, no study has supported the effectiveness of this intervention with respect to the symptoms of the disease. Our goal was to assess the effect of an osteopathic manual technique for the lower esophageal sphincter on GERD symptoms, cervical mobility and on the C4 spinous process pressure pain threshold (PPTs). Methods: A randomized, double-blind placebo-controlled trial was performed. Sixty subjects suffering from GERD participated in this study and were randomly assigned to either an experimental group (EG) (n = 29), who received the osteopathic technique for the lower esophageal sphincter, or to a control group (CG) (n = 31), who received a manual contact, which mimicked the osteopathic technique without exerting any therapeutic force. Randomization was computer-generated, with allocation concealed by sequentially numbered, opaque, sealed envelopes. The GerdQ questionnaire was used to assess symptom changes the week after intervention. Cervical Range of Motion (CROM) and algometer were used to evaluate cervical mobility and PPTs before and after both treatments. Before–after between groups comparison (t-test) was used for statistical analysis of the outcome, with two measurement points (GerdQ), while repeated-measures ANOVA was used for those outcomes with four measurement points (CROM and PPT). Results: The application of the osteopathic manual treatment in subjects with GERD produced a significant improvement in symptoms one week after the intervention (p = 0.005) with a between-groups difference of 1.49 points in GerdQ score (95% CI: 0.47–2.49). PPT C4 improved in the EG after the treatment (p = 0.034; η2 = 0.048) (between-groups difference 8.78 Newton/cm2; 95% CI: 0.48–17.09). CROM also increased in the EG compared to the CG (p < 0.001; η2 = 0.108) (between-groups difference 33.89 degrees; 95% CI: 15.17–52.61). Conclusions: The manual osteopathic technique produces an improvement in GERD symptoms one week after treatment, cervical mobility, and PPTs. This may mean that osteopathic treatment is useful for improving symptoms of GERD. View Full-Text
Keywords: GERD; gastroesophageal reflux; osteopathic medicine; pain threshold; complementary therapies GERD; gastroesophageal reflux; osteopathic medicine; pain threshold; complementary therapies
►▼ Show Figures 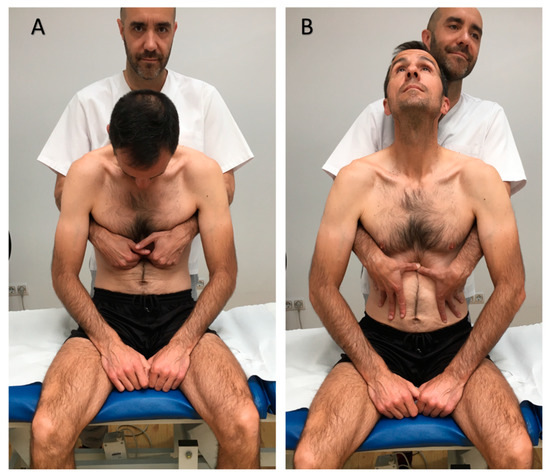