Objective: The optimal acupoints for a particular disease can be determined by analysis of diagnosis patterns. The objective of this study was to reveal the association between such patterns and the acupoints prescribed in clinical practice using medical data extracted from case reports. Methods: This study evaluated online virtual diagnoses made by currently practicing Korean medical doctors (N = 80). The doctors were presented with 10 case reports published in Korean medical journals and were asked to diagnose the patients and prescribe acupoints accordingly. A network analysis and the term frequency-inverse document frequency (tf-idf) method were used to analyse and quantify the relationship between diagnosis patterns and prescribed acupoints. Results: The network analysis showed that ST36, LI4, LR3, and SP6 were the most frequently used acupoints across all diagnoses. The tf-idf values showed the acupoints used for specific diseases, such as BL40 for bladder disease and LU9 for lung disease. Conclusions: The associations between diagnosis patterns and prescribed acupoints were identified using an online virtual diagnosis modality. Network and text mining analyses revealed commonly applied and disease-specific acupoints in both qualitative and quantitative terms. View Full-Text
Keywords: acupuncture; data mining; pattern identification; network analysis acupuncture; data mining; pattern identification; network analysis
►▼ Show Figures 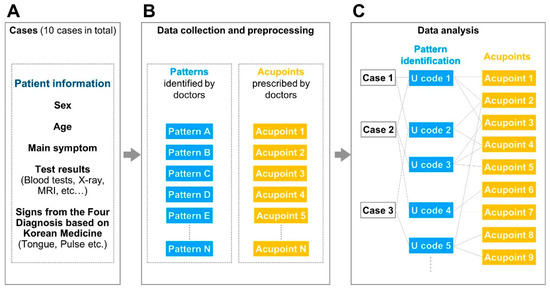