The Effectiveness of Intermittent Fasting to Reduce Body Mass Index and Glucose Metabolism: A Systematic Review and Meta-Analysis

The effects of an intermittent fasting diet (IFD) in the general population are still controversial. In this study, we aimed to systematically evaluate the effectiveness of an IFD to reduce body mass index and glucose metabolism in the general population without diabetes mellitus. Cochrane, PubMed, and Embase databases were searched to identify randomized controlled trials and controlled clinical trials that compared an IFD with a regular diet or a continuous calorie restriction diet. The effectiveness of an IFD was estimated by the weighted mean difference (WMD) for several variables associated with glucometabolic parameters including body mass index (BMI) and fasting glucose. The pooled mean differences of outcomes were calculated using a random effects model. From 2814 studies identified through a literature search, we finally selected 12 articles (545 participants). Compared with a control diet, an IFD was associated with a significant decline in BMI (WMD, −0.75 kg/m2; 95% CI, −1.44 to −0.06), fasting glucose level (WMD, −4.16 mg/dL; 95% CI, −6.92 to −1.40), and homeostatic model assessment of insulin resistance (WMD, −0.54; 95% CI, −1.05 to −0.03). Fat mass (WMD, −0.98 kg; 95% CI, −2.32 to 0.36) tended to decrease in the IFD group with a significant increase in adiponectin (WMD, 1008.9 ng/mL; 95% CI, 140.5 to 1877.3) and a decrease in leptin (WMD, −0.51 ng/mL; 95% CI, −0.77 to −0.24) levels. An IFD may provide a significant metabolic benefit by improving glycemic control, insulin resistance, and adipokine concentration with a reduction of BMI in adults.
Keywords: intermittent fasting; glucose metabolism; insulin resistance; body mass index intermittent fasting; glucose metabolism; insulin resistance; body mass index

Calorie restriction (CR) is known not only to reduce body weight but also to improve various cardiovascular risk factors [1]. Prolonged CR has been shown to reduce fat mass with significant weight loss. An improvement of insulin resistance was also identified after CR [2]. Mechanisms of CR-mediated improvement of glucose metabolism are not fully elucidated, but possibly involve significant alterations in insulin sensitivity of skeletal muscle [3], along with the reduction of fat mass.
Nevertheless, there are many difficulties in sustaining daily CR [4]. As an alternative diet intervention to CR, weight control through intermittent fasting (IF) has been proposed. A variety of diets have been used to study the effects of IF [5], including alternate-day fasting (ADF, consuming no calories on fasting days) [6], alternate-day modified fasting (ADMF, consuming less than 25% of baseline energy needs on fasting days) [7,8], time-restricted fasting (TRF, restricting food intake to specific time periods of the day) [9], and periodic fasting (PF, fasting only one to two day per week) [10]. In addition to the effect on weight loss, many studies have shown that through IF we can expect a powerful effect on improvement of glucose metabolism by lowering insulin resistance [11], improvement of systemic inflammatory diseases [12,13,14,15], protection against neurodegeneration, and even expansion of the life span [16].
In a recent study, an IF diet (IFD) improved insulin sensitivity even when the supplied calories were the same as those of the control group, without significant change in body weight [17]. This shows that IF, itself, can be beneficial to glucose metabolism independent of body weight changes, however, contrary to other results, in some controlled, randomized crossover trials, IF did not improve glucose and lipid metabolism [18,19]. Likewise, there were also conflicting results in the effect of weight reduction. Although some studies reported significant weight reduction in an IFD group [7,20], several other trials did not report a clinically meaningful weight reduction [18,21].
As seen from the varied and inconsistent findings of previous studies, many hurdles based on the characteristics of the diet intervention study, such as non-standardized dietary control of the patient, low compliance, and the number of participants due to the difficulty of conducting a study covering an entire period, and the difficulty of setting the control group, make it difficult to identify the beneficial effects of an IFD. Furthermore, several previous meta-analysis studies on the glucometabolic effect of an IFD have also shown conflicting results [22,23], which is important for establishing diet recommendations for the general population including the population with obesity or prediabetes. Thus, this study aimed to investigate the effectiveness of IF on weight loss and glucose metabolism by analyzing the effect size of previous studies among the general population without diabetes mellitus (DM).

We searched articles using Cochrane (from inception to Nov 2018), PubMed (from inception to Nov 2018), and Embase (from inception to Nov 2018) published before November 15, 2018. The terms used in the literature search were “intermittent fasting,” “Ramadan diet”, “Ramadan fasting”, “time-restricted fasting”, “time-restricted feeding”, “alternate fasting”, “periodic fasting”, “periodic diet”, “reduced meal frequency”, “alternate-day fasting” and “alternate-day modified fasting” for intervention terms. These search terms were combined with “OR”. In addition, “normal human”, “adult”, “patient”, “human”, “obesity”, “diabetes mellitus”, “diabetes”, “metabolic syndrome” and “obese” were also combined with “OR” as terms for the objects. The abovementioned two term groups were combined with “AND”. Languages were limited to English. This study was registered before the data analysis (Prospero CRD42019125120). This was a literature-based descriptive study, and therefore approval by the institutional review board or informed consent was not required.

The inclusion criteria of the literature were as follows: studies on the general population without chronic diseases that could affect glucose metabolism including diabetes mellitus (patients, P); those that studied an IFD (intervention, I); those that compared the control groups, regular diet (RD) or continuous CR diet control without fasting (≥12 h) (comparison, C); and those that described fasting glucose, homeostatic model assessment of insulin resistance (HOMA-IR), total body weight, body mass index (BMI), lean mass, fat mass, leptin, and adiponectin (outcome, O) according to the research question (PICO). Only controlled trials of supervised diet programs were eligible. Studies were limited to interventions which were a minimum 4 weeks in duration. In addition, only studies that presented the mean and standard deviation of the results were selected.
We excluded studies on patients with diabetes mellitus, chronic liver disease, chronic renal disease, and studies on pregnancy (P); those that involved a combination with specific nutrient restriction diet intervention (I); those that compared with a different type of IFD (C); and those with results other than the parameter of glucose metabolism, such as psychological parameter (O). The literature was independently selected by two researchers (Namki Hong and Yongin Cho), and cases of inconsistencies were resolved via a thorough discussion. In consideration of the possibility that some articles could be missed by the above search terms, we further searched the review papers of similar topics to see if there were any papers corresponding to the same PICO. 2.3. Data Extraction
Fasting glucose, HOMA-IR, BMI, fat mass, lean mass, leptin, adiponectin, and total body weight were used as variables for the effect of an IFD and were calculated using the mean, standard deviation, number of participants, as well as baseline and final values. The contents of the literature were examined in detail, and the types of IFD and control diet were coded and presented. If there was a numerical result due to the different control group in the contents of one document, the data were extracted according to categories for the control group and errors resulting from the duplication of the same documents were supplemented using statistical techniques.

To supplement the systematic review, a meta-analysis was performed. STATA 15 (StataCorp LLC, College Station, TX, USA) was used to synthesize the effect sizes of the 12 selected documents. The weighted mean difference (WMD) between the baseline and final measurements of fasting glucose, HOMA-IR, BMI, fat mass, lean mass, leptin, adiponectin, and total body weight according to the intervention were considered as the effect size, and the inverse variance method was used because the values were continuous variables. The random effects model was chosen because of the diversity and heterogeneity of the intervention. Heterogeneity was estimated using the I2 statistic across the studies [24]. I2 values were interpreted as follows: 0% to 40%, no important heterogeneity; 30% to 60%, moderate; 50% to 90%, substantial; and 75% to 100%, considerable heterogeneity. The heterogeneity of pooled effects between subgroups was calculated using the Cochran Q statistic. A funnel plot method was used to test potential publication bias.

A total of 2814 studies were selected according to the search method of our study. After eliminating 1216 duplicate documents, the titles and abstracts of 1598 studies were reviewed, and 1097 papers that had no relevance with the original review according to the PICO were excluded. Among 501 studies selected by reviewing the titles and abstracts, 12 studies were finally included in this study (Figure 1). The total number of participants was 545 (261 in the intervention group and 284 in the control group; 210 or 38.5% men and 335 or 61.5% women). The general characteristics of the included studies are summarized in Table 1.

3.2. Effectiveness of Intermittent Fasting on BMI and Body Weight

3.4. Effect of Intermittent Fasting on Lean and Fat Mass and Circulating Leptin and Adiponectin

This work was supported by a INHA UNIVERSITY HOSPITAL research grant. 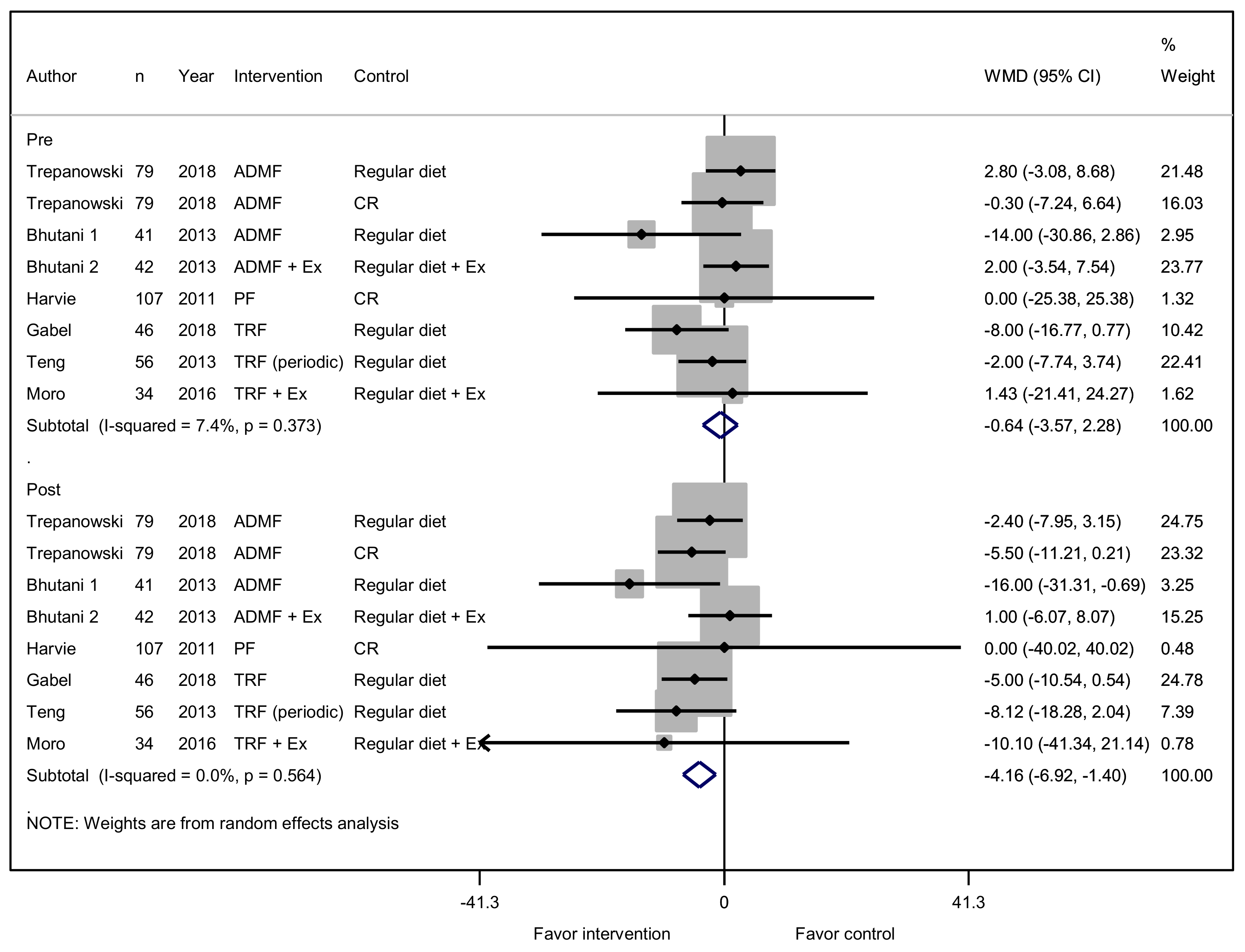 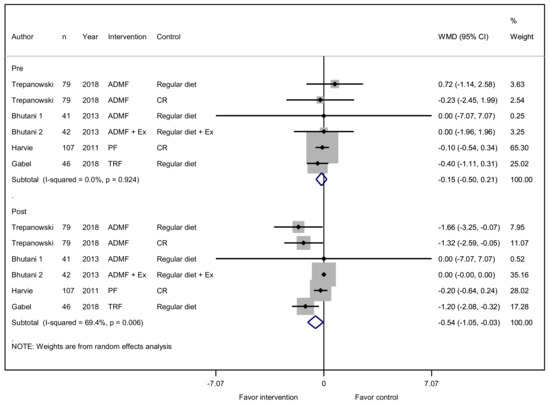