Multimodal Treatment of Patients with Mental Symptom Load: A Pre–Post Comparison
Next Article in Special Issue

Review
Together We Stand, Divided We Fall: A Multidisciplinary Approach in Complicated Acute Pancreatitis
by

:
Acute pancreatitis (AP) is an inflammatory condition with a mild course in most patients, but 20–30% evolve to single or multiple organ dysfunction and pancreatic/peripancreatic necrosis, with potentially infected collections. In the first weeks of disease, a systemic inflammatory syndrome (SIRS) dominates the clinical setting, and early management decisions in this precocious phase can change the course of the disease. Imaging is crucial in the diagnosis, and since the adoption of the revised Atlanta classification, four different types of pancreatic/peripancreatic collections have been defined. The management of the complicated forms of AP has been defined by several treatment guidelines, and the main indication for intervention is local infection, preferably in walled-off necrosis. Open surgery necrosectomy is associated with a very high rate of morbimortality, giving a place to different multidisciplinary methodologies, emphasizing drainage and necrosectomy techniques in a “step-up” approach starting from mini-invasive endoscopic drainage and moving, if needed, to progressively more invasive techniques, including interventional radiology and mini-invasive surgery. With the advent of several new technologies in the specialties involved, the complicated AP cases which need drainage and necrosectomy benefit from a new era of multidisciplinary cooperation, permitting higher efficacy with lower levels of morbimortality and reducing hospital stay and costs.
Keywords:
acute pancreatitis; infection; haemorrhage; necrosectomy; drainage

Acute pancreatitis (AP) is a term meaning an acute inflammatory course of the pancreas with a complete pathogenesis yet to be completed elucidated. Its definition, regardless of the aetiology, is based on the fulfilment of “two out of three” of the following criteria: Clinical (upper abdominal pain), laboratory (serum amylase or lipase >3 upper limit of normal) and imaging (computed tomography, magnetic resonance, ultrasonography) [1].
In a great majority of cases, AP is a self-limiting illness with appropriately supportive treatment. In fact, most patients with AP recover within a week, whereas patients with severe forms have a high risk of multi-organ failure [2]. These extreme forms of AP develop in 20% of patients, with a historical mortality risk of as high as 30% [3].
There have been many clinical scoring systems proposed to predict severity in the early phase of AP (Ranson [4], Modified Glasgow [5], Systemic Inflammatory Response Syndrome (SIRS) [6], and Acute Physiology, Age, Chronic Health Evaluation II (APACHE II) [7]), together with imaging-guided severity indexes (Balthazar [8], computed tomography severity index [9]), or even single laboratory parameters such as C-reactive protein, procalcitonin or blood urea nitrogen. Two recent systematic reviews confirmed the APACHE II and simple bedside index as the most accurate severity prediction scores [10,11]. In clinical practice, however, these scoring systems are irrelevant because of their complexity and low feasibility, and the decisions are based on real-time measurements [12].
During the first weeks of AP, there is a release of inflammatory mediators, initiating a systemic inflammatory response syndrome (SIRS) that may induce single or multiorgan failure with or without concomitant necrosis, infection, and possibly death [6]. This response can be similar, or even identical, to a clinical one arising from infection, and it was described for the first time as an inflammatory process, independent of its cause [13]. Its manifestations include, but are not limited to, more than one of the following: Temperature >38 °C or <36 °C; tachycardia >90 bpm; tachypnea > 20/min or pCO2 < 32 mmHg; and white blood cell count > 12000/cu mm (cubic millimeter) or <4000/cu mm; or >10% immature (band) forms [14].
Imaging is certainly very useful for the diagnosis of AP, but it is not an absolute requirement for it, as in cases of prolonged period between clinical complaints and presentation, patients with low level of consciousness, or clinical situations with a difficult differential diagnosis with other acute abdomen scenarios.
Since the adoption of the revised Atlanta classification in 2012, AP has been defined in three grades of severity: Mild, moderately severe and severe. Of these three grades, it is the severe form of AP that presents persistent organ failure for more than 48 hours despite the presence or the absence of local complications [6].
The local complications of AP have been classified in four types of collections based on radiologic and pathologic features, independently of the clinical prediction of gravity. Any of these types of fluid collections may be sterile or infected. This determinant-based classification defines two types of collections in the setting of interstitial edematous pancreatitis (acute peripancreatic fluid collections and pancreatic pseudocysts) and two other types of collections in necrotizing pancreatitis (acute necrotic collections before demarcation and walled-off necrosis (WON) [15]. This last type of collections characteristically has encapsulating walls that are developed four or more weeks after the onset of AP according the revised Atlanta classification. Nevertheless, a multicenter study demonstrated that 43% of demarcated collections already developed within the first three weeks after onset of necrotizing pancreatitis [16].

Complicated acute pancreatitis remains a devastating disease that is associated with mortality up to 30% and enormous and rising inpatient costs [17]. Early triage and referral to high-volume centers with defined protocols and multidisciplinary approaches are ways to drop of the global mortality described in literature in the last few decades.
Interventions for necrotizing pancreatitis have evolved considerably over recent years, with a minimally invasive step-up approach now preferred. The best methodology, according to the literature, is endoscopic and/or percutaneous catheter drainage followed, if needed, by endoscopic or minimally invasive surgical necrosectomy.
A highly differentiated team with a special interest in necrotizing pancreatitis is mandatory to succeed with the best outcomes, clinically and financially. Such a team must integrate dedicated pancreatic surgeons, gastroenterologists, and intervention radiologists beyond intensivists in appropriate intensive care unit facilities.

All authors discussed this review, selected the presented cases and performed the clinical work and the final manuscript. 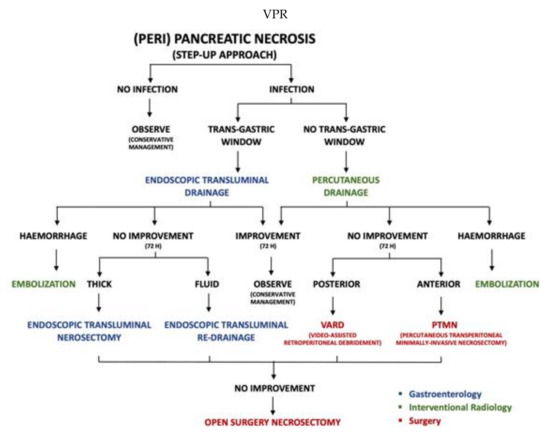 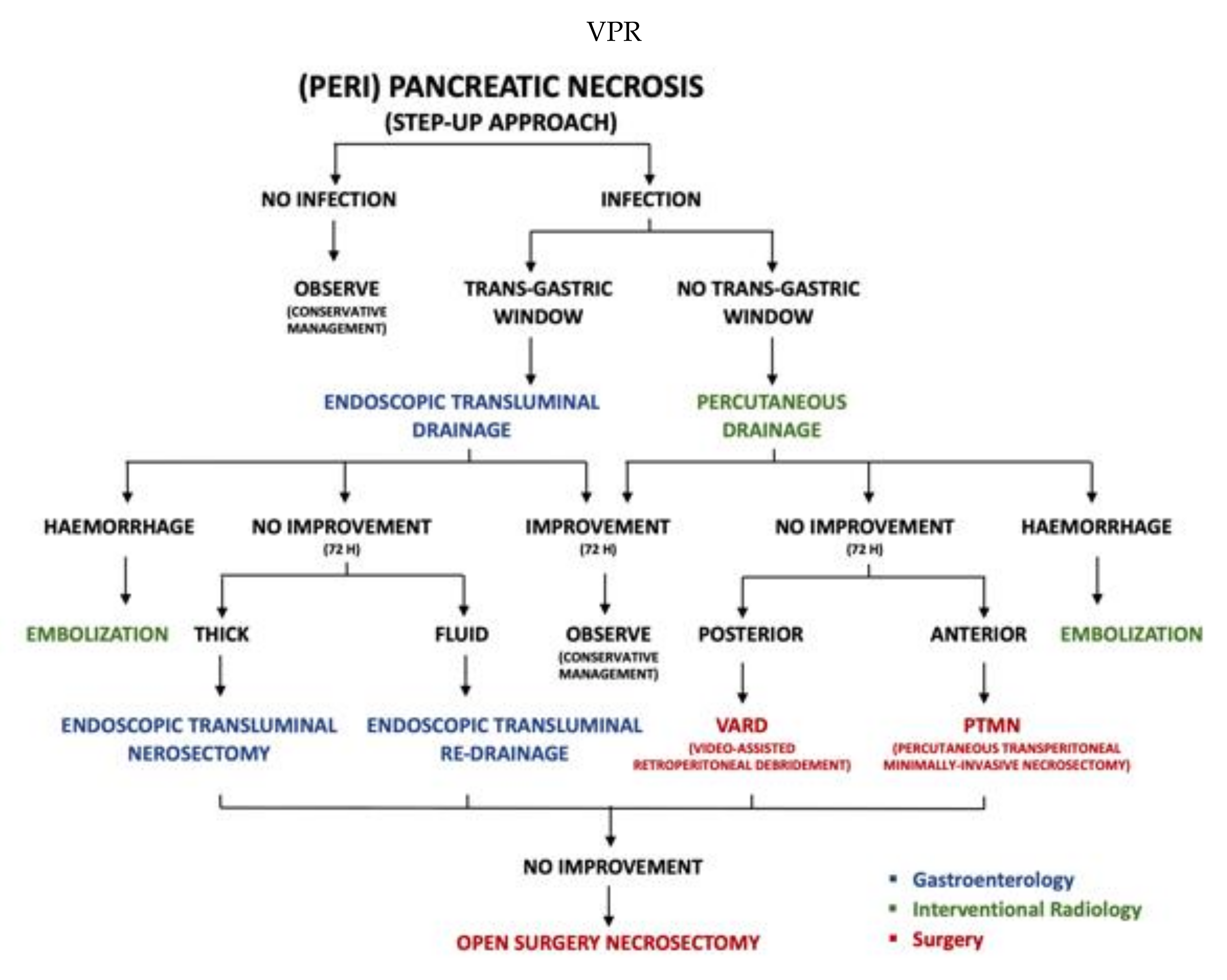