RANKL signalization is implicated in the morphogenesis of various organs, including the skeleton. Mice invalidated for Rankl present an osteopetrotic phenotype that was less severe than anticipated, depending on RANKL’s implication in morphogenesis. The hypothesis of an attenuated phenotype, as a result of compensation during gestation by RANKL of maternal origin, was thus brought into question. In order to answer this question, Rankl null mutant pups from null mutant parents were generated, and the phenotype analyzed. The results validated the presence of a more severe osteopetrotic phenotype in the second-generation null mutant with perinatal lethality. The experiments also confirmed that RANKL signalization plays a part in the morphogenesis of skeletal elements through its involvement in cell-to-cell communication, such as in control of osteoclast differentiation. To conclude, we have demonstrated that the phenotype associated with Rankl invalidation is attenuated through compensation by RANKL of maternal origin. View Full-Text
Keywords: RANKL; skeletal growth; morphogenesis; osteoclast; bone; mandible; tooth RANKL; skeletal growth; morphogenesis; osteoclast; bone; mandible; tooth
►▼ Show Figures 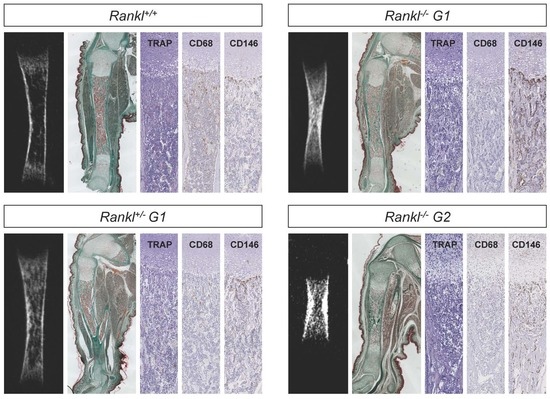