The Influence of Parental Emotional Neglect on Assault Victims Seeking Treatment for Depressed Mood and Alcohol Misuse: A Pilot Study

Following a traumatic event, most people will experience some posttraumatic stress symptoms (PTSS), typically intrusion (e.g., thoughts, images, or nightmares) and hyperarousal (e.g., anxiety) symptoms [1]. Other mental health symptoms such as depression [2,3] and alcohol misuse can also develop following exposure to a traumatic event [4,5]. PTSS and depression are considered to be the most commonly experienced posttraumatic psychiatric conditions [6] that interact and increase psychological distress [7]. After a traumatic event, alcohol may be used to alleviate PTSS and other distressing psychological symptoms [8]. Alcohol use in this situation may represent an avoidance strategy, in that it may help to anesthetise and delay experiencing overwhelming and distressing PTSS [9].

The lifetime prevalence of experiencing sexual assault is higher for women than men [10,11,12]. People who have been sexually assaulted are also more likely to report depressive symptoms [11,13,14] and are at greater risk of alcohol use disorder [15,16,17] compared with people who have not been sexually assaulted. In particular, the prevalence rates for Posttraumatic Stress Disorder (PTSD) and depression in women who report sexual assault is 36% (respectively) while alcohol misuse is 20% [18]. Exposure to lifetime violence also often results in an increased risk of PTSD, major depressive disorder [19] and higher rates of at-risk drinking [15,20]; with victims most commonly reporting distress with the physical effects of the assault as well as heightened fear and anxiety when in public places [21].

Neglect can be defined as the unresponsive care towards a child by their caregiver, that is so chronic that it disrupts the developing brain [22]. Neglect includes inadequate nurturing and affection to the child [23] as well as constantly ignoring and denying them opportunities to mix with other people or children [24]. Research suggests that the prevalence of neglect is approximately one in ten children [25] with no gender differences in reported exposure [23].
Child neglect often co-occurs (and therefore is researched) with other forms of childhood maltreatment and adverse circumstances [26]. One large study investigated the effects of adverse circumstances in childhood on health behaviours and disease when an adult and found that a range of childhood adverse circumstance (including domestic violence, abuse and neglect) were interrelated. In particular, they found that 57.5% of participants who reported childhood emotional neglect also experienced physical abuse, whilst 36.9% also reported sexual abuse [26]. The limitation of this study was that it did not investigate later psychological effects or risks of exposure to subsequent assault, when an adult.
Other research on adults who were exposed to childhood maltreatment (including neglect) [22,27,28,29,30] report poorer physical and mental health outcomes [22] including higher levels of adult depression [31], alcohol misuse [30] and PTSD [32]. Research on children has also shown that chronic neglect in childhood is associated with more negative mental health outcomes compared with abuse exposure [33]. The negative mental health outcomes from neglect during childhood are also found in adolescents [34] and (more recently) adults [35,36,37]. The long-term effects of childhood neglect across middle and older adulthood are only now beginning to be investigated [32,38].

Past research investigates the effects of co-occurring posttraumatic psychiatric conditions, rather than the sequencing of symptoms. For example, sexual and physical assaults are both associated with PTSD [39,40] and PTSD often co-occurs with depressive and alcohol use disorders [6,20,38]. Parental emotional neglect studies have also shown associations with adult PTSD [29], depression [31] and alcohol misuse [41] but tend to assess emotional neglect in combination with other forms of abuse/maltreatment [27,29,30,35]. Relationships and predictive pathways between parental neglect and traumatic assaults, with comorbid PTSS, depression, and alcohol misuse in adult mental health populations, are limited. It is also unknown whether exposure to parental emotional neglect can lead to vulnerabilities in experiencing particular traumatic assaults as well as particular psychological symptoms.

This study aimed to expand on knowledge about the effects of parental emotional neglect on participants seeking treatment for depressed mood and alcohol misuse (who report assault exposure) by capitalising on the DAISI (Depression and Alcohol Integrated and Single focussed Interventions) project’s baseline data from Baker, et al. [42,43]. The DAISI project was a randomised controlled trial conducted in Newcastle and Brisbane, Australia, evaluating four different psychological interventions for co-existing depression and alcohol misuse. In Stage 1, we aimed to explore the relationships between parental emotional neglect as a child and exposure to sexual/physical assaults (regardless of age of exposure) on severity of PTSS, depression, drinking and alcohol misuse. In Stage 2, we used a path analysis to develop separate exploratory and predictive models for the effects of parental emotional neglect on exposure to sexual/physical assaults as well as severity of PTSS, depressive and alcohol dependence symptoms. We hypothesised that, compared with those who did not report assault exposure, participants who reported assault exposure would be more likely to report more parental neglect during childhood; and in adulthood, and would show more severe PTSS, depression and alcohol misuse.

Participants were recruited into the DAISI project [42] following approval by both the Human Research Ethics (University of Newcastle) and the University of Queensland Ethics Committees (ethics approval code: H-066-0705). Recruitment was via a range of treatment agencies and media advertisements. Inclusion criteria were: (a) ≥16 years of age; (b) current depressive symptoms (score ≥17 on the Beck Depression Inventory-II, BDI-II); (c) and consuming alcohol at harmful levels as determined by the Australian National Health and Medical Research Council’s (2001) drinking guidelines [44]. Potential participants were excluded if they: (i) were currently diagnosed with a psychotic disorder; (ii) reported a history of traumatic brain injury; (iii) lacked fluency in English; or (iv) lived too far away to attend sessions.
Ages of participants ranged from 20 to 73 years, with an average of 45.3 (SD 11.0). There were 113 men and 107 women, with the majority experiencing a traumatic event (71.8%, n = 158) [38].

Traumatic exposure and PTSS severity (in the past month) were measured using the Posttraumatic Diagnostic Scale (PDS). Traumatic exposure was assessed using the PDS 12 traumatic event checklist, which has 11 specific trauma categories and one ‘other’ [45]. For an event to be considered traumatic, it must also meet the DSM-IV PTSD Criterion A of feeling helpless or hopeless during traumatic exposure [46]. PTSS severity was measured by summing items 22–38, which were ranked from ‘5 or more times a week’ (3), ‘2 to 4 times a week’ (2), ‘once a week or less’ (1), and ‘not at all or only once’ (0). The score ranges between 0 and 51. The internal consistency of the total PTSS summed score is (α) 0.92 with the higher the summed score, the higher the PTSS severity [45]. The PDS has high internal consistency (Chronbach α = 0.92), good test-retest reliability (κ = 0.74), sensitivity (82.0%), and diagnostic agreement (79.4% agreement, κ = 0.59 [45].
The Measure of Parenting Style (MOPS); assessed experiences of dysfunctional parenting during childhood, with the three separate scales of ‘Indifference’ (parental neglect, items 5, 8, 10, 11, 12, and 13), ‘Over-control’ (items 1, 3, 4 and 6) and ‘Abuse’ (items 2, 7, 9, 14 and 15) from both parents, separately [47]. Participants rated ‘how true’ the 21 items were in relation to their mother’s and father’s behaviour towards them, through to 16 years of age. Each parent’s behaviour was rated as ‘extremely true’ (3), ‘moderately true’ (2), ‘slightly true’ (1) or ‘not true at all’ (0). All scores were summed with higher scores denoting more dysfunctional parenting. The potential ranges for the subscales were 0–18 for Neglect, 0–12 for Over-control and 0–15 for Abuse [47].
Depressive symptoms for the previous 2 weeks were measured using the 21-item Beck Depression Inventory (BDI-II) [48]. BDI–II scores range from 0 to 63. The BDI-II has good reliability (α = 0.92), and is able to distinguish depressed from non-depressed populations [48].
Alcohol misuse during the previous 6 months was measured with the Alcohol Use Disorders Identification Test (AUDIT) [49]. The AUDIT has 10 items with a potential range of 0–36 with questions 1–3 assessing for levels of alcohol consumption, questions 4–6 assessing alcohol dependence symptoms, and questions 7–10 assessing for harmful alcohol use [50]. The higher the summed score, the more severe the alcohol misuse (score range = 0–36). Sensitivity and specificity of the cut-off score of 8 was more than 0.90 [50].
The Severity of Alcohol Dependence Questionnaire (SADQ-C) assessed alcohol dependence symptoms in a heavy drinking period within the previous 6 months. The score range is 0–60 [51]. It has sound reliability and validity, and a cut-off of 4 indicates mild alcohol dependence [52].
Drinking frequency was assessed by the Alcohol Timeline Followback (TLFB) method, focusing on the previous two weeks [53]. TLFB is a calendar method that accurately and retrospectively measures daily alcohol consumption (and the variability in consumption levels) [54]. It has high test-retest reliability with coefficients ranging from 0.79 to 0.96 over a 30- or 90-day period [53].

Factor analysis was performed as a data reduction exercise on the 12 traumatic events listed in the PDS. It used the tetrachoric correlation matrix (due to traumatic events being dichotomous) and applied principal factor extraction with a varimax rotation. The analysis identified the following four trauma event factors with eigenvalues >1: Sexual Assault (SA: including family sexual assault, stranger sexual assault, and sexual contact <18 years); Physical Assault (PA: gaol, and family and stranger non-sexual assault); Combat and Torture (CT); and Serious Accident and Natural Disaster (SAND). Preliminary analyses showed no significant differences in depression symptom severity, alcohol misuse and other psychological symptoms between the SAND group with the participants in the DAISI study that reported no trauma exposure (perhaps because many in this group were exposed to low-grade trauma during the 1989 Newcastle earthquake). The CT (n = 12) group numbers were too small to be included in the analysis. Accordingly, this study focused on whether participants reported SA or PA (due to the factor analysis process identifying them as separate factors) and to determine if there were symptomatic differences between the two assault groupings. For further information about this analysis, please see Bailey et al. [38].
This investigation was divided into two stages. The first assisted in identifying different symptom associations and relationships for SA and PA by using Spearman rho (ρ) correlations and ordinal logistic regressions. This cautious analysis approach was selected due to the data being mildly skewed, and the ranked nature of the traumatic event types within each assault group (0, no Assault; 1, one assault type; 2, two assault types; and 3, three traumatic assault types experienced). To control the family-wise error (when examining a large set of correlations/comparisons) we used the Benjamini and Hochberg false discovery rate approach [55]. Thus, SA and PA analysis had statistical significance set at 0.002 and 0.003 respectively, to control for multiple comparisons in correlations. The ordinal logistic regression adopted a stepwise approach due to the exploratory nature of this study so that the best model could be developed. Missing data was mostly for the MOPS assessment and were managed through the list-wise deletion of cases [56].
The second stage explored the pathways (through path analysis) between Maternal/Paternal Emotional Neglect and assault exposure (as the dichotomous variables for SA and PA) with severity of PTSS, and symptoms of depression and alcohol dependence. The models of SA and PA were developed by applying the goodness of fit for each model. All analysis was conducted using SPSS for Windows (version 19.0). AMOS Graphics [56] software was used to conduct the SA and PA path analysis.

Stage 1: Correlations and Regressions of Sexual and Physical Assault Variables.

All authors contributed to this manuscript. The authors would also like to acknowledge the assistance of Jane McDonald with template customising. The corresponding author thanks Robyn South for her encouragement in researching and working with people who have been exposed to psychological trauma.

The authors declare that there are no conflicting interests. 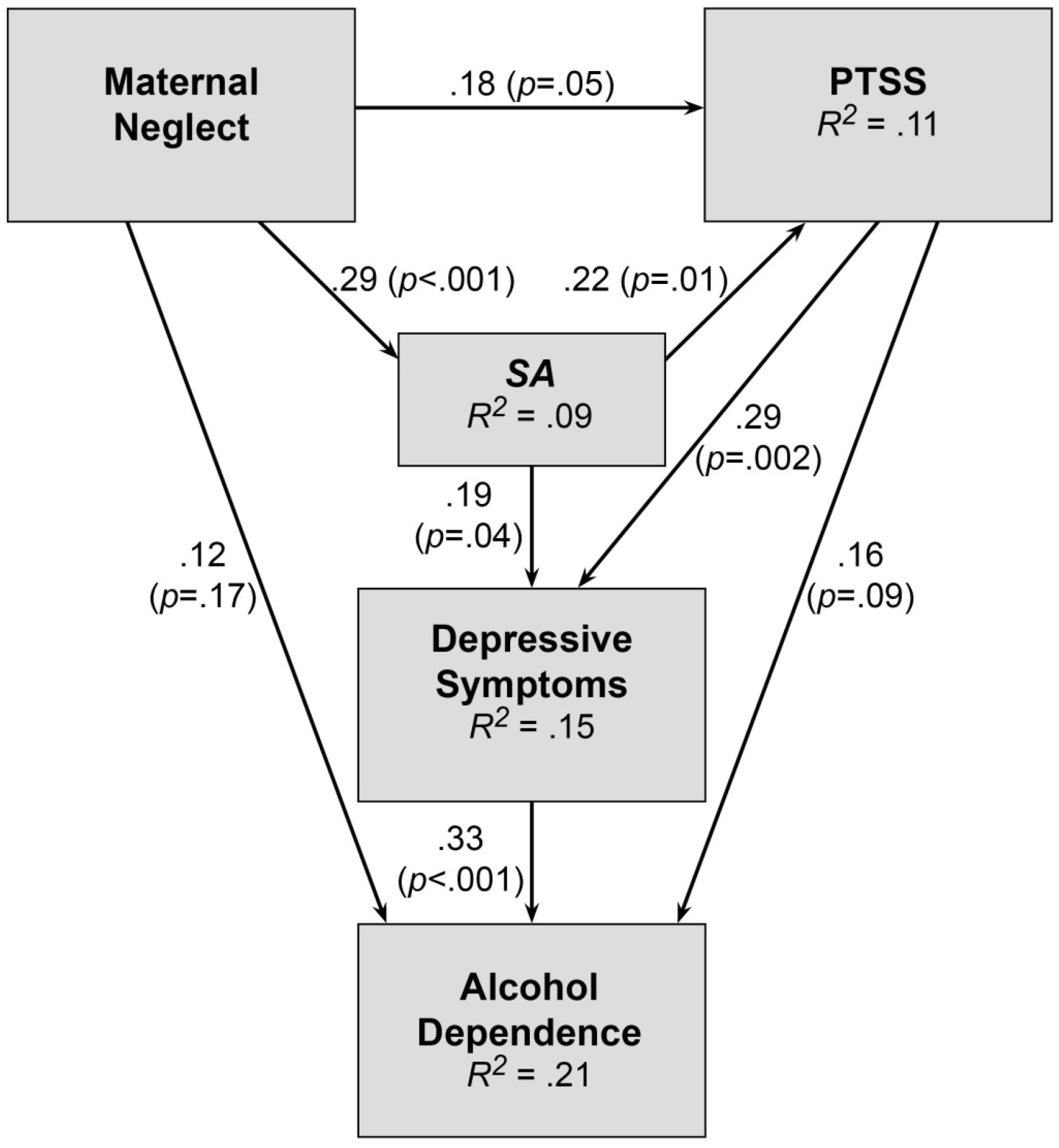 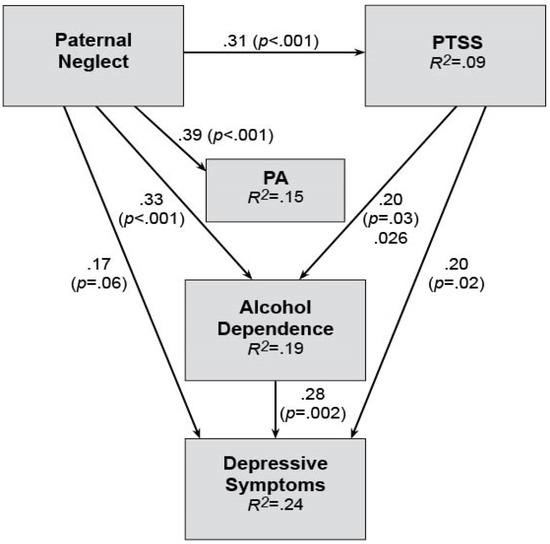