Sulcus vocalis is a frequent cause of glottic insufficiency that leads to incomplete vocal fold closure during phonation. Type II sulcus vocalis is defined as a partial defect of the lamina propria (LP). Treatment with fillers, such as fat or hyaluronic acid (HA), in the vocal folds is widely used, but the duration of effect is variable. Platelet-rich plasma (PRP) can enhance the survival of autologous fat in fat grafting, and also is used to treat sulcus vocalis. This study aimed to compare the effectiveness of autologous fat graft versus fat graft plus PRP to treat type II sulcus vocalis. Thirty-four patients with a voice handicap index (VHI) ≥ 11 were randomized to two groups, which received LP injections of fat graft (n = 17) or fat graft plus PRP (n = 17). At 1 month and 6 months after injection, the VHI decreased significantly in both groups. The fat plus PRP group had better Jitter, Shimmer, and noise to harmonic ratio (NHR) in 1 month and 6 months after surgery. The fat plus PRP group resulted in lower VHI scores one month after surgery, and stroboscopy revealed sustained smaller gaps after six months. These results indicate that a combination of fat graft plus PRP is safe and effective for treating sulcus vocalis type II and associated vocal atrophy. View Full-Text
Keywords: sulcus vocalis; lamina propria; platelet-rich plasma; autologous fat sulcus vocalis; lamina propria; platelet-rich plasma; autologous fat
►▼ Show Figures 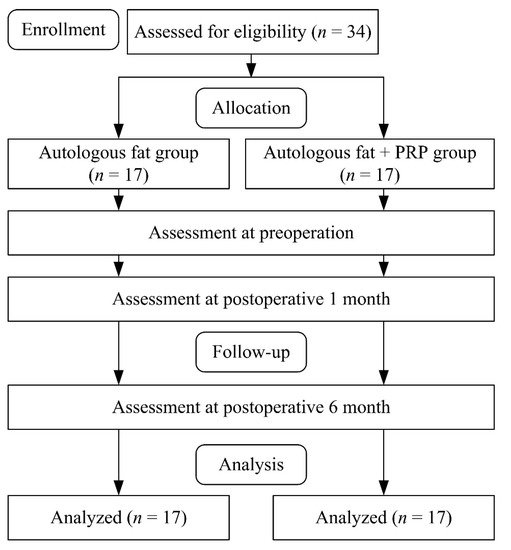