We aimed to evaluate the safety and immunogenicity of the BNT162b2 vaccine in young people with Down syndrome (DS), and to compare their humoral immune response with those of the healthy controls (HC). Individuals with DS and HC received the BNT162b2 vaccine. Longitudinal blood samples were collected on the day of vaccination, twenty-one days after the first dose, seven days after the second dose, and six months after the first dose. Both the local and systemic adverse events reported by participants were mild. Pain at the injection site was the most reported local adverse event, while fever was the systemic adverse event. Humoral responses showed a significant increase of anti-S and anti-S trimeric antibody (Ab) levels after both doses of vaccine in both groups. In comparison with HC, Ab levels in individuals with DS were similar at T21, but significantly lower, both in terms anti-S and anti-S trimeric, at T28 (respectively p = 0.0003 and p = 0.0001). At T180 both groups showed a significant reduction of anti-S trimeric Ab levels compared to T28 (p = 0.0004 and p < 0.0001 for DS and HC, respectively). Individuals with DS exhibit a good humoral response to the BNT162b2 vaccine; however, similarly to in HC, the immune response wanes over time. View Full-Text
Keywords: down syndrome; COVID-19; mRNA vaccination; humoral response down syndrome; COVID-19; mRNA vaccination; humoral response
►▼ Show Figures 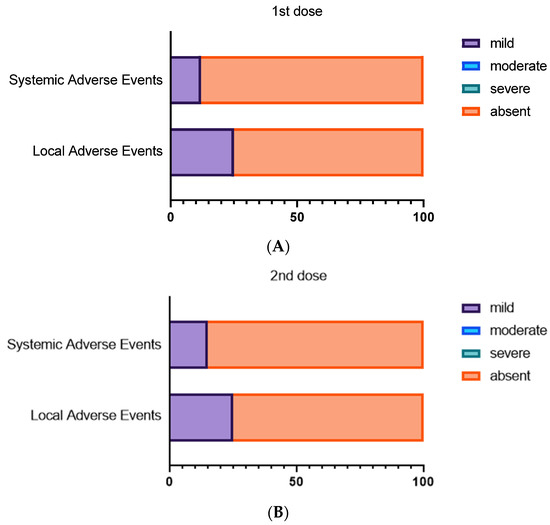