The SLC26A4 gene, which encodes the anion exchanger pendrin, is involved in determining syndromic (Pendred syndrome) and non-syndromic (DFNB4) autosomal recessive hearing loss. SLC26A4 c.349C>T, p.L117F is a relatively common allele in the Ashkenazi Jewish community, where its minor allele frequency is increased compared to other populations. Although segregation and allelic data support the pathogenicity of this variant, former functional tests showed characteristics that were indistinguishable from those of the wild-type protein. Here, we applied a triad of cell-based assays, i.e., measurement of the ion transport activity by a fluorometric method, determination of the subcellular localization by confocal microscopy, and assessment of protein expression levels, to conclusively assign or exclude the pathogenicity of SLC26A4 p.L117F. This protein variant showed a moderate, but significant, reduction in ion transport function, a partial retention in the endoplasmic reticulum, and a strong reduction in expression levels as a consequence of an accelerated degradation by the Ubiquitin Proteasome System, all supporting pathogenicity. The functional and molecular features of human pendrin p.L117F were recapitulated by the mouse ortholog, thus indicating that a mouse carrying this variant might represent a good model of Pendred syndrome/DFNB4. View Full-Text
Keywords: hearing loss; SLC26A4; pendrin; DFNB4; Pendred syndrome; functional testing hearing loss; SLC26A4; pendrin; DFNB4; Pendred syndrome; functional testing
►▼ Show Figures 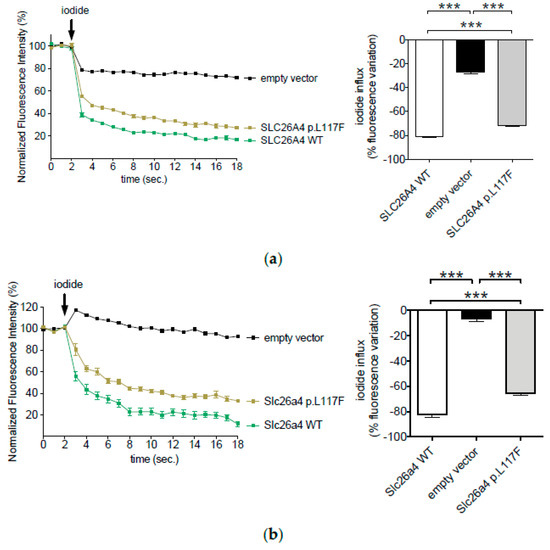