Epidemiology, Physiology and Clinical Approach to Sleepiness at the Wheel in OSA Patients: A Narrative Review
Previous Article in Special Issue

This prospective randomized controlled study investigated the accuracy of catheter tip positioning by landmark-based methods during left subclavian venous cannulation. Ethical approval for this study was provided by the Institutional Review Board of Kangdong Sacred Heart Hospital in Seoul, Republic of Korea (President: Soo Young Kim, protocol number: KANGDONG 2019-03-002-001) on 26 April 2019. All the experiments were carried out in accordance with the relevant guidelines and regulations of the Declaration of Helsinki involving human subjects. All the patients signed an informed consent form prior to study enrolment. After obtaining written informed consent from each patient, we recruited 120 patients (20–80 years of age) with the American Society of Anesthesiologists physical status class 1 to 3, who were eligible for left subclavian venous cannulation before abdominal and cardiovascular surgeries between April 2019 and November 2021. The exclusion criteria were a previous history of thoracic surgery, mediastinal mass, esophageal varices, and refusal to participate. This study was registered with the Clinical Research Information Service of Korea (https://cris.nih.go.kr (accessed on 20 July 2021); identifier: KCT0006388; principal investigator: Il Seok Kim).

Following general anesthesia induction, an echocardiographic probe (X7-2t transesophageal transducer; Phillips, Andover, MA, USA) was inserted into the esophagus. During cannulation, the patient was maintained in the Trendelenburg position with arms abducted. After sterile preparation and draping, the puncture site in the infraclavicular area was pre-scanned using two-dimensional ultrasonography (Affiniti 70; Phillips, Andover, MA, USA) and a high-frequency linear transducer. After palpation of the sternal angle and identifying the right first intercostal space over the skin, the distance between the venous insertion point and the midpoint of the right first intercostal space just lateral to the sternal angle, and the distance between the first and third intercostal spaces just lateral to the sternum, were measured using a sterile graduated ruler. Central venous cannulation was performed by an ultrasound-guided in-plane approach in the longitudinal view. A 20 cm long, two-lumen catheter (Arrow G+ard Blue Central Venous Catheter; Arrow International Inc., Reading, PA, USA) was inserted using the Seldinger technique and secured at the determined depth according to the protocol for each group. On the bicaval view of echocardiography (Figure 2), accurate positioning of the catheter tip was assessed relative to the right atrial junction, which was assumed to be at the level of the upper border of the crista terminalis [13]. We also assessed the incidence of the angle of the tip > 40° in relation to the SVC, abutment of the tip with the SVC, and flow streams hitting the vascular wall using injections of agitated saline at the radiologically or topographically predetermined insertion depth.
The actual distance between the venous insertion point and the right atrial junction was assessed using advancement or withdrawal of the catheter from the bicaval view. Following the repositioning of the catheter tip at the right atrial junction or the maximum depth of the 20 cm catheter, the catheter was fixed with a skin suture.
Postoperatively, the catheter position was rechecked using a recumbent chest radiograph upon inspiration at the bedside. Any complication related to cannulation was recorded until the removal of the catheter.
The primary outcome was the incidence of acceptable positioning of the catheter tip within the target zone, which was designated as 2 cm above and 1 cm below the right atrial junction, since this area has a large conduit of vessels and the catheter tip floats freely without impinging on the vascular wall. The secondary outcomes were the difference between the determined insertion depth and the actual distance to the right atrial junction, the incidence of the angle of the tip > 40° in relation to the SVC, tip abutment with the SVC, flow streams hitting the vascular wall, and any cannulation-related complications.

Based on the landmarks and calculated values for right-sided cannulation from a previous study, the sample size was calculated from the data based on our preliminary observation, in which the patients were divided into two groups with the carina and the right third intercostal space as landmarks for positioning the catheter tip within the target zone [8]. Consequently, 30 patients were included in each group, and the incidence of acceptable positioning was 83.3% (25/30) and 96.6% (29/30) in the carina and third intercostal space groups, respectively. Based on the incidence rate, an alternative hypothesis and test type were chosen as one-sided (H1: P1 < P2) and the pooled Z test, respectively. We calculated that 56 patients were required in each group to detect a difference of this magnitude with an α error of 0.05 and a desired power of 0.80, using PASS 12 (NCSS, LLC, Kaysville, UT, USA). After accounting for a dropout rate of 6%, we recruited 120 patients for this study.

Statistical analysis was performed using the SPSS version 23.0 (IBM Inc., Armonk, NY, USA). The Shapiro–Wilk test was used to assess the normal distribution of variables. Continuous variables are reported as medians (interquartile range (IQR)) and compared using the Mann–Whitney U test or the independent Student’s t-test, as considered appropriate. Categorical variables are presented as numbers (proportion) and compared using Fisher’s exact test or Pearson’s chi-square test, as considered appropriate. A probability value less than 0.05 was considered to be statistically significant.

Of the 120 patients screened for the study, six patients were excluded owing to the unavailability of echocardiography at cannulation (n = 2), conversion to other access sites (n = 3), and preoperative detection of an abnormal thoracovascular condition of persistent left SVC (n = 1). Accordingly, 114 participants were randomly allocated to one of the two intervention groups, with 57 participants in each group (Figure 3). All the participants underwent successful cannulation and catheter positioning, except two patients in whom the catheter tip could not be identified from the bicaval view. Misplacement of the catheter into the left internal jugular vein occurred in one patient in the R group, and an aberrant positioning of the catheter due to persistent left SVC occurred in one patient in the T group. These patients were not included in the statistical analysis. Finally, 56 patients per group were analyzed.

3.2. Characteristics of the Participants and Measurements

This work was supported by the Basic Science Research Program through the National Research Foundation of Korea, funded by the Ministry of Education (NRF-2018R1D1A1B07043429) and by a research grant from the Kangdong Sacred Heart Hospital, Korea (grant no. 2022-03).

The study was conducted in accordance with the guidelines of the Declaration of Helsinki and the protocol was approved by the Institutional Review Board of Kangdong Sacred Heart Hospital (IRB no. KANGDONG 2019-03-002-001, 26 April 2019).

A written informed consent was obtained from all participants involved in the study.

The datasets used and/or analyzed during the current study are available from the corresponding author upon a reasonable request. 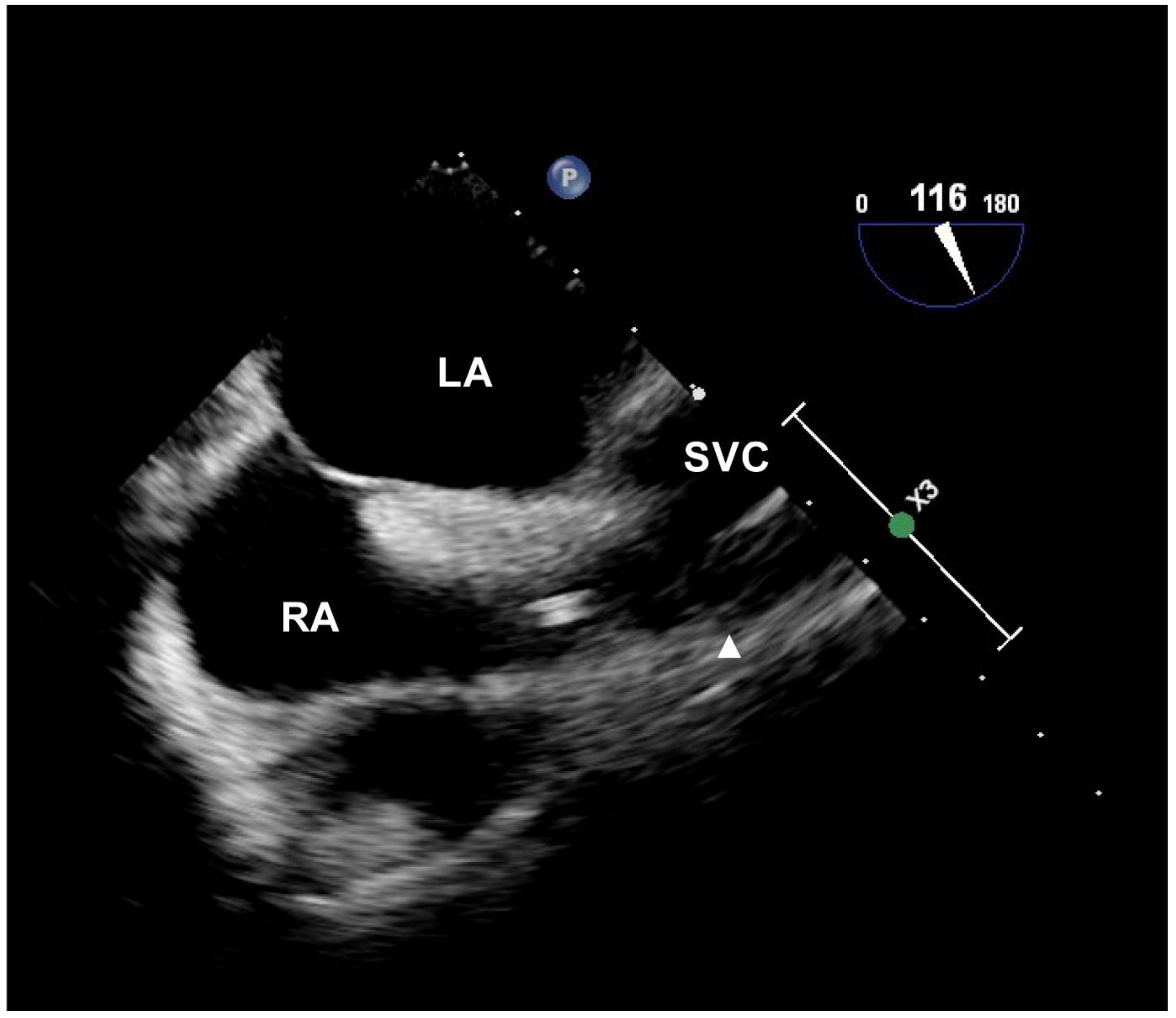 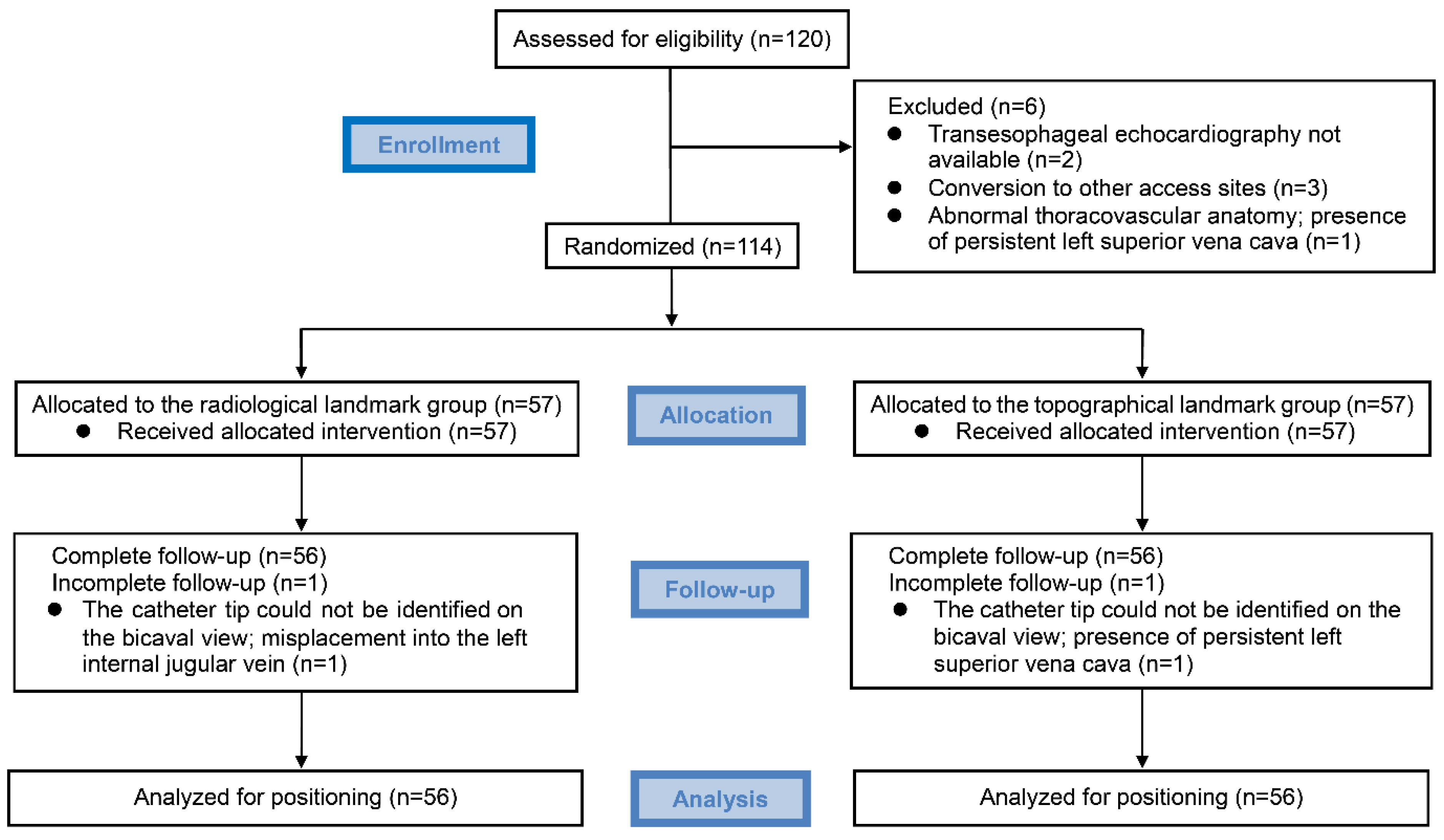