Primary Hyperparathyroidism: A Narrative Review of Diagnosis and Medical Management
Next Article in Special Issue

Uric Acid and Hypertension: Prognostic Role and Guide for Treatment

Background: The associations of nocturia with hypertension and anti-hypertensive agents (AHTs) remain to be validated. Methods: This cross-sectional study examined whether blood pressure and/or frequently used classes of AHTs had consistent associations with nocturia. Methods: A total of 418 male patients aged ≥ 40 years were retrospectively assessed in terms of the International Prostate Symptom Score (IPSS), prescription medications, and blood pressure. Nocturia was evaluated using item 7 of the IPSS, and two or more episodes of nocturia per night was considered to indicate clinically important nocturia. Results: Patients taking calcium channel blockers (CCBs), but not other AHTs, experienced more episodes of nocturia than patients not taking AHTs (1.77 ± 1.07, 1.90 ± 1.19, and 1.48 ± 0.98 in CCBs alone, CCBs + other AHTs, and other AHTs alone, vs. 1.35 ± 1.08 in not taking AHTs; p = 0.014, p < 0.0001, and p = 0.91, respectively), whereas there was no significant difference in the number of nocturia episodes between patients with elevated and normal blood pressure. In multivariate analysis, CCB (odds ratio (OR) = 2.68, p < 0.0001) and age (OR = 1.06, p < 0.0001) were independently associated with clinically important nocturia. Conclusion: CCB was associated with nocturia, while AHTs other than CCBs and elevated blood pressure were not. View Full-Text
Keywords: nocturia; calcium channel blocker; anti-hypertensive agents; hypertension; blood pressure nocturia; calcium channel blocker; anti-hypertensive agents; hypertension; blood pressure
►▼ Show Figures 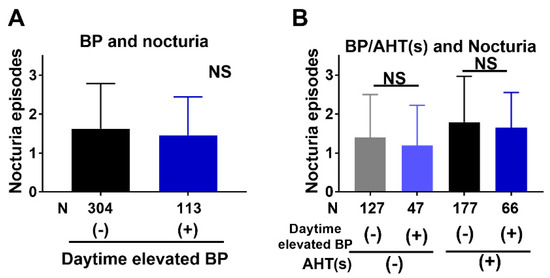