The Coming-of-Age Transition Care for Adolescents with Rheumatic Disease—Where Are We and What Have We Done in Asia?
Previous Article in Special Issue

What Are the Expectations for Cardiac Resynchronization Therapy? A Validation of Two Response Definitions

Background: Left bundle branch area pacing (LBBAP) has recently been introduced as a novel physiological pacing strategy. Within LBBAP, distinction is made between left bundle branch pacing (LBBP) and left ventricular septal pacing (LVSP, no left bundle capture). Objective: To investigate acute electrophysiological effects of LBBP and LVSP as compared to intrinsic ventricular conduction. Methods: Fifty patients with normal cardiac function and pacemaker indication for bradycardia underwent LBBAP. Electrocardiography (ECG) characteristics were evaluated during pacing at various depths within the septum: starting at the right ventricular (RV) side of the septum: the last position with QS morphology, the first position with r’ morphology, LVSP and—in patients where left bundle branch (LBB) capture was achieved—LBBP. From the ECG’s QRS duration and QRS morphology in lead V1, the stimulus- left ventricular activation time left ventricular activation time (LVAT) interval were measured. After conversion of the ECG into vectorcardiogram (VCG) (Kors conversion matrix), QRS area and QRS vector in transverse plane (Azimuth) were determined. Results: QRS area significantly decreased from 82 ± 29 µVs during RV septal pacing (RVSP) to 46 ± 12 µVs during LVSP. In the subgroup where LBB capture was achieved (n = 31), QRS area significantly decreased from 46 ± 17 µVs during LVSP to 38 ± 15 µVs during LBBP, while LVAT was not significantly different between LVSP and LBBP. In patients with normal ventricular activation and narrow QRS, QRS area during LBBP was not significantly different from that during intrinsic activation (37 ± 16 vs. 35 ± 19 µVs, respectively). The Azimuth significantly changed from RVSP (−46 ± 33°) to LVSP (19 ± 16°) and LBBP (−22 ± 14°). The Azimuth during both LVSP and LBBP were not significantly different from normal ventricular activation. QRS area and LVAT correlated moderately (Spearman’s R = 0.58). Conclusions: ECG and VCG indices demonstrate that both LVSP and LBBP improve ventricular dyssynchrony considerably as compared to RVSP, to values close to normal ventricular activation. LBBP seems to result in a small, but significant, improvement in ventricular synchrony as compared to LVSP. View Full-Text
Keywords: left bundle branch area pacing; bradycardia pacing; cardiac resynchronization therapy left bundle branch area pacing; bradycardia pacing; cardiac resynchronization therapy
►▼ Show Figures 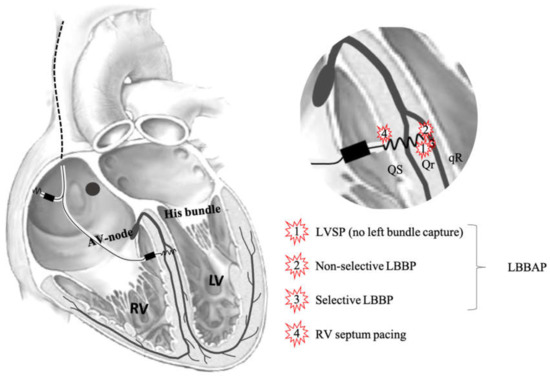