Preterm Delivery; Who Is at Risk?

Globally, an estimated 15 million infants are born preterm annually [1], and preterm birth (PTB) remains the leading cause of death under the age of 5 years [2]. The World Health Organization (WHO) defines PTB as all births before 37 completed weeks of gestation, with a further sub-division based on gestational age; extremely PTB (delivery at less than 28.0 weeks of gestation), very PTB (delivery between 28.0 and 31.6 weeks of gestation) and moderate to late PTB (delivery between 32.0 and 36.6 weeks of gestation) [1].
Over the past few decades, improvements in modern obstetrics, perinatology, and neonatal care have resulted in an improved survival of the premature infant [3,4,5,6]. Among the improvements is included the widespread application of antenatal glucocorticoid therapy, the introduction of synthetic surfactant, and a tendency towards more aggressive feeding strategies [7]. Thus, premature infants are surviving with major and minor neurodevelopmental morbidities, often resulting in lifelong disability [8]. Neurodevelopmental impairments can include, among other morbidities, cerebral palsy (CP), cognitive dysfunction, and sensory impairments [6,9,10].
As the most common cause of severe physical disability in childhood [11,12], CP defines a group of permanent disorders that has occurred in the developing fetal or infant’s brain, resulting in severe limitation of activity [12,13,14,15]. In CP, motor impairment is often accompanied by disturbances of sensation, perception, cognition, communication and behavior [15]. The overall prevalence of CP is estimated to be 2 per 1000 live births [6,11,16] and its risk is inversely proportional to gestational weight and age at birth, but not necessarily increasing severity [6]. The prevalence of CP expressed by gestational age is reported to be 14.6% in extremely preterm children, 6.2% in very preterm children, and 0.7% in moderate to late preterm compared with 0.11% in term-born children [16,17].
The pathophysiologic mechanisms accounting for the neurodevelopmental disorders in preterm survivors are poorly understood. Perinatal systemic inflammation may sensitize the developing brain to secondary insults and contribute to sustained central nervous system inflammation [18]. Inflammation and related cytokines that can lead to preterm birth may be combined with genetic and epigenetic factors, altering the preterm infant’s brain, making it vulnerable to injury [19,20,21,22].
As neurologic morbidity is one of the devastating outcomes of prematurity, we elected to investigate the association between the grade of prematurity and long-term neurological morbidity of the offspring, in order to set up a critical cut-off at which the long-term neurological morbidity of the offspring would be higher.

We conducted a retrospective population-based cohort study, which included all singleton pregnancies in women who delivered between the years 1991 and 2014. The study was conducted at the Soroka University Medical Center (SUMC). The hospital assists the local population by providing obstetrical and pediatric care being the only tertiary medical center in the Negev district. The Negev occupies 60% of the land of Israel, and SUMC serves the entire population of the region (14% of Israel’s population, approximately 1,190,000) with a birth rate in the southern region showing a positive trend and continues to grow each year [23].
Thus, this study is based on nonselective population data. The Institutional Review Board (in accordance with the Helsinki declaration) approved the study (IRB #0357-19-SOR).
Four groups were evaluated during the study period, based on gestational age, as followed by the WHO (1); extreme PTB: 24 + 0–27 + 6, very PTB: 28 + 0−31 + 6, moderate to late PTB: 32 + 0−36 + 6 weeks of gestation and term deliveries. Neurological morbidity included hospitalizations up to 18 years of age involving a predefined set of ICD-9 (International Classification of Diseases) codes, as recorded in hospital records. Neurological morbidity encompasses movement disorders, developmental disorders, degenerative disorders, psychiatric disorders, and CP (Table S1). Multiple pregnancy, women with lack of prenatal care, women with chromosomal abnormalities or congenital anomalies, and perinatal mortality cases (intrauterine fetal death, intrapartum death, postpartum death) were excluded from the study. All other deliveries were included in the study.
Follow up was terminated if any of the following occurred: the first hospitalization at SUMC for neurological morbidity, any hospitalization which resulted in death, the child reached 18 years of age, or at the end of the study period.
Data were collected from two computerized clinical data sets: the first, perinatal data from the obstetric and gynecologic department at SUMC, including information that was documented by obstetricians directly following delivery. Subsequently, medical secretaries regularly examine the data before it is entered into the database. After evaluating and crossing the hospital documents with prenatal care records, coding is performed. Maximal completeness and accuracy of the databases is fulfilled with these unique measures. The second is a computerized pediatric hospitalization at SUMC (Demog-ICD-9), which includes both demographic data and medical diagnosis during hospitalization. The two databases were cross-linked and merged based on the patients’ ID (mother and child). All diagnoses were classified by the international classification of disease (ICD-9).
Neurological outcomes assessed included hospitalization of the offspring up to 18 years of age due to primary or secondary neurological morbidity, with secondary neurological morbidity defined as hospitalization with neurological morbidity not being the primary diagnosis. These outcomes included at least one diagnosis of the following: movement disorder (including seizures disorders), cerebral palsy (including infantile cerebral palsy unspecified, paraplegia, diplegia of upper limbs, and paralysis unspecified), autism spectrum disorders, eating disorders, psychiatric disease, attention deficit hyperactivity disorder, and developmental disorders. The predefined ICD-9 codes of all diagnoses are detailed in the Supplemental Table (Table S1). In our setting, screening for neurological morbidity is performed at The Institute for Child Development, which provides diagnostic services, treatment, and monitoring for children with developmental disorders from birth to 6 years old. Beyond this age, children diagnosed with developmental disorders are referred to at developmental and neurological clinics at SUMC or in the community. Additionally, the Institute for Child Development has close ties with, and oversees, other ambulatory services. Although diagnoses made at the Institute for Child Development diagnoses are not part of the SUMC hospitalization database, these diagnoses are often recorded as background diagnoses in the database when a child is hospitalized. In Israel, early assessment of developmental disorders routinely takes place at community “Well Baby” centers. If an additional evaluation is required, the children and their families are referred to Child and Family Developmental Centers, where the child is evaluated by a multi-disciplinary care team to ascertain eligibility for service provision. Thus, neurological diagnosis may be captured in the SUMC database when a child is referred for hospitalization by the community clinic. Additionally, the community clinic and SUMC share an online interface, which assists in capturing all diagnoses upon admission.

Univariable analysis was performed to compare background characteristics between the 4 study groups. The univariable analysis included Chi-square tests for categorical variables and ANOVA tests for continuous variables according to their distribution. The incidence of long-term (up to the age of 18 years) hospitalizations of the offspring due to neurological morbidity was evaluated in the four gestational week age groups. Cumulative incidence morbidity rates were compared using a Kaplan–Meier survival curve, with use of the log-rank test to determine significant differences. Cox proportional hazards models were conducted to compare neurological associated hospitalization risk among offspring born preterm (using dummy variables), divided based on gestational age and term offspring (the reference group), while adjusting for length of follow up. The models adjusted for potential confounders based on the univariable analysis and on the clinical importance of the variables. The cox regression for long-term neurological hospitalizations was adjusted for maternal age, diabetes mellitus, hypertensive disorder, cesarean section and child year birth. The cox regression for cerebral palsy was adjusted for maternal age and child year birth. The mothers in the cohort were entered as clusters to account for dependence between siblings. All analysis was performed using SPSS package 23rd edition (IBM, Armonk, NY, USA) as well as the STATA software 12th edition (StataCorp, College Station, TX, USA).

In conclusion, very preterm offspring have the highest risk for CP and long-term neurological morbidity. A crucial threshold of 25 weeks gestation was prominent in our study, below which the jeopardy of long-term neurological morbidity of the offspring increased significantly. It is also emphasized that each additional week of gestation further decreased the risk of long-term neurological morbidity, stressing the necessity to consider to properly schedule medically indicated preterm delivery and even early-term delivery in respect of the long-term health of the offspring. Clinical practice should attempt prevention of preterm delivery where possible and attempt to optimize the timing of medically indicted induced delivery as close to full term as medically possible without surpassing an unacceptable increase in the risk to both mother and fetus. Increased surveillance during childhood for signs of neurological impairment could contribute to offspring born prematurely, which is unique for those who born prior to 25 weeks of completed gestation. The mechanisms by which in utero events impact brain injury resulting in subsequent adverse neurodevelopment are extraordinarily complex. Understanding the pathways that lead to observed associations is a challenge that will require immense ongoing scientific rigor.

The following are available online at https://www.mdpi.com/article/10.3390/jcm10132919/s1, Table S1: ICD-9 codes of neurological disorders considered in the study.

The study was conducted according to the guidelines of the Declaration of Helsinki, and approved by the Institutional Review Board of Soroka university medical center (IRB #0357-19-SOR, approved on 11 December 2019). 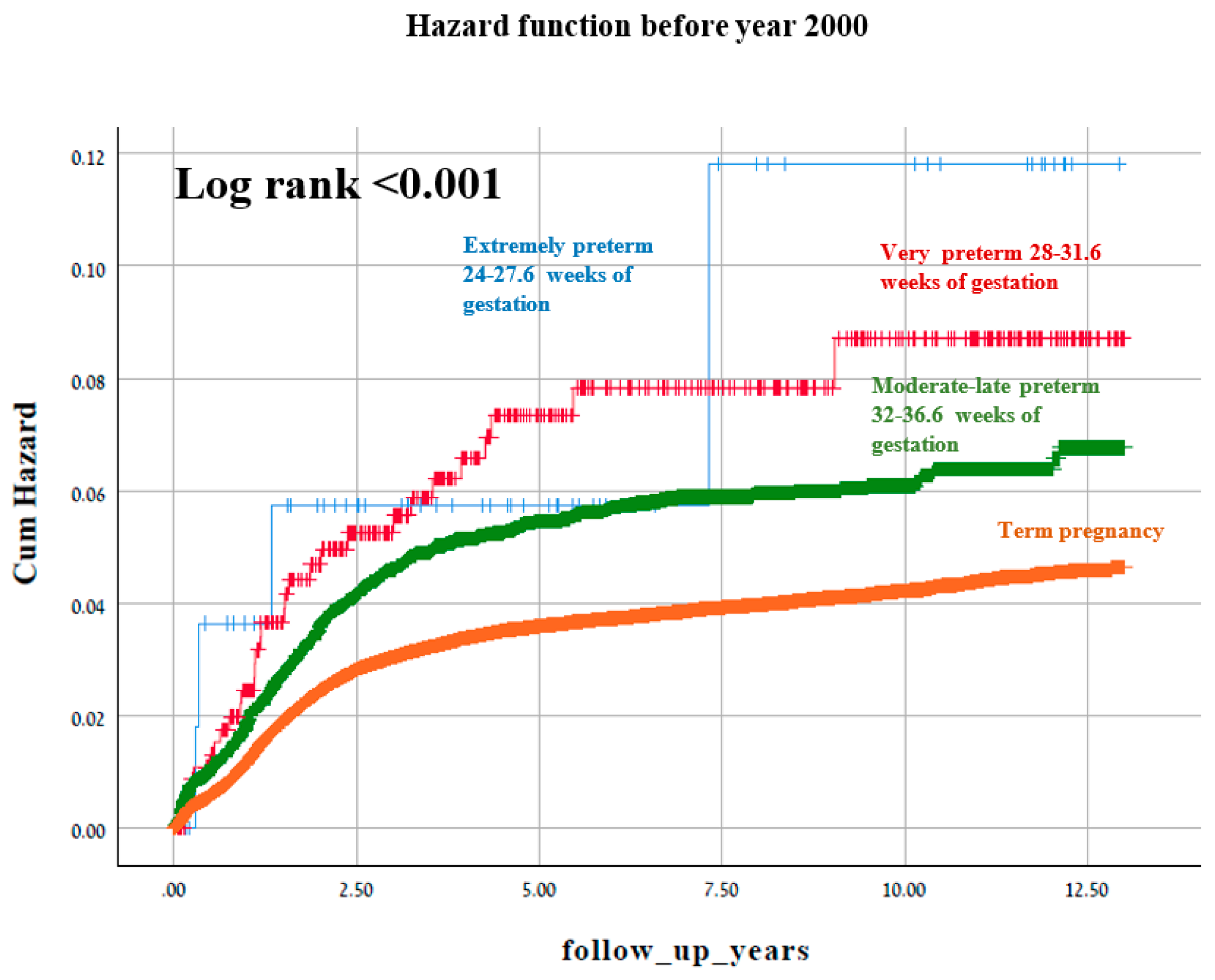 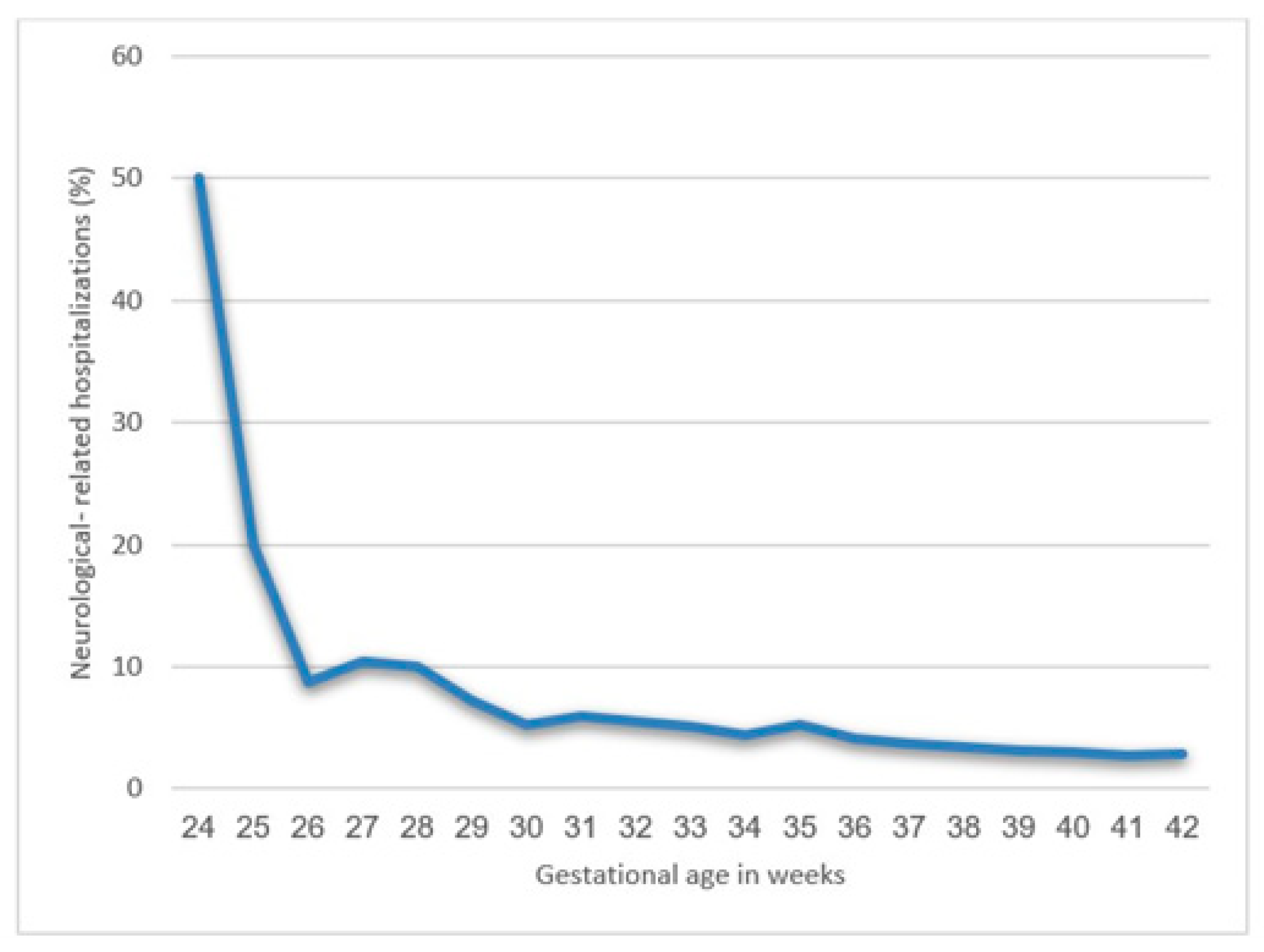