The CORTICO-COP trial showed that eosinophil-guided corticosteroid-sparing treatment for acute exacerbation of chronic obstructive pulmonary disease was non-inferior to standard of care and decreased the accumulated dose of systemic corticosteroids that patients were exposed to by approximately 60%. Smoking status has been shown to affect corticosteroid responsiveness. This post hoc analysis investigated whether eosinophil-guided treatment is non-inferior to conventional treatment in current smokers. The main analysis of current smokers showed no significant difference in the primary endpoint, days alive, and out of hospital within 14 days between the control group (mean, 9.8 days; 95% confidence interval (CI), 8.7–10.8) and the eosinophil-guided group (mean, 8.7 days; 95% CI, 7.5–9.9; p = 0.34). Secondary analyses of the number of exacerbations or deaths, the number of intensive care unit admissions or deaths, lung function improvement, and change in health-related quality of life also showed no significant differences between the two groups. The results of a sensitivity analysis of ex-smokers are consistent with the main analysis. Our results suggest that eosinophil-guided treatment is non-inferior to standard of care in current smokers and ex-smokers. Because data on the impact of smoking status on eosinophil-guided treatments are sparse, more randomised trials are needed to confirm our results.
Keywords: chronic obstructive pulmonary disease; corticosteroid resistance; smoking; airway inflammation; blood eosinophils chronic obstructive pulmonary disease; corticosteroid resistance; smoking; airway inflammation; blood eosinophils

The study population consisted of patients from the CORTICO-COP trial, a nationwide multicentre prospective trial (N = 318), investigating eosinophil-guided corticosteroid treatment for hospitalisation-requiring acute exacerbation of COPD [12]. All consecutive patients admitted to the wards of the participating sites were eligible if they were included within 24 h of admission, were aged at least 40 years old, had known airflow limitation (defined as post-bronchodilator forced expiratory volume in 1 s (FEV1)/forced vital capacity ratio ≤ 0.70), and a specialist-verified diagnosis of COPD based on stable disease-state data. Exacerbations were defined according to the consensus definition described by the Global Initiative for Chronic Obstructive Lung Disease (GOLD) committee: acute worsening of respiratory symptoms that result in additional therapy. Exclusion criteria included self-reported or physician-diagnosed asthma, life expectancy of less than 30 days, severe COPD exacerbation requiring invasive ventilation or ICU admission, allergy to systemic corticosteroids, inability to provide written informed consent, pregnancy or lactation, systemic fungal infections, or patients receiving more than 10 mg of maintenance systemic corticosteroids daily. Written informed consent was obtained from patients before randomisation. Patients could only participate in the trial once.

The sample size was fixed because 104 current smokers participated in the CORTICO-COP trial. Thus, we performed a power calculation for the t-test (assuming a normal distribution). The standard deviation for DAOH14 was approximately 3.8 days. We hypothesised that in the population of daily smokers randomised in the CORTICO-COP trial, the eosinophil-guided reduction in systemic corticosteroids of approximately 60%, published in the main analysis, would decrease DAOH14 by 2 days or more, as smokers may be less responsive to corticosteroids. Therefore, the power of the analysis (two-sided) was 0.75.

Among smokers, we found that there was no significant difference in the primary outcome (DAOH14) between the control group and the eosinophil-guided corticosteroid-sparing treatment group in our study. Assessment of secondary outcomes also revealed no significant differences between the two study arms. Similar results were observed in our sensitivity analysis for ex-smokers. Our results indicate that eosinophil-guided corticosteroid treatment is equally non-inferior to the standard of care in current smokers and ex-smokers with regard to the primary and secondary outcomes. However, we noted a slightly higher exposure to systemic corticosteroids in ex-smokers.
Not only do inflammation and oxidative stress from cigarette smoking contribute to the pathogenesis of COPD, but smoking also contributes to [18] and perpetuates [19] corticosteroid resistance in patients with COPD. In particular, ICS are significantly less effective in suppressing airway inflammation in current smokers than in ex-smokers [20,21]. Moreover, current smoking status influences the long-term effects of ICS on lung function decline [22]. Inhaled budesonide has no effect on lung function decline [23] or progression of emphysema [24] compared to the placebo in current smokers with COPD. Furthermore, ICS are less effective in reducing COPD exacerbations in current smokers than in ex-smokers [21]. A previous study found that smoking status was not associated with the effectiveness of systemic corticosteroids in reducing COPD exacerbations [25].
Several mechanisms have been proposed to explain the reduction in corticosteroid response identified in patients with COPD, including upregulation of pro-inflammatory cytokines as a result of increased lung inflammation, reduced activity of corticosteroid receptor (GR), reduced expression of histone deacetylase-2, altered expression of surfactant protein D, and loss of Mucin 1 cytoplasmic tail expression [26,27,28]. However, relevant research in this field is lacking, which creates a major barrier to effective management of COPD in patients with reduced responsiveness to the anti-inflammatory effects of corticosteroids. This emphasises the need for further research into the molecular mechanisms responsible for corticosteroid resistance and highlights the importance of personalisation and optimisation of corticosteroid treatment for patients with COPD to control symptoms.
Measuring blood eosinophils has clinical potential for tailoring systemic corticosteroid treatment for COPD acute exacerbations [14]. Previous trials have shown that eosinophil-guided systemic corticosteroid treatment for acute exacerbation of COPD was non-inferior to standard of care [12,13]. However, the impact of smoking status on the efficacy of this treatment has not been well-characterised. A meta-analysis of eosinophil-guided prednisolone therapy by Bafadhel et al. concluded that smoking history did not affect the overall results, but current smoking status was been analysed [29]. Furthermore, most studies investigating the relationship between smoking/lung inflammation and corticosteroid resistance focused on ICS and not systemic corticosteroids.
Previous analyses on the ECLIPSE study showed that the proportion of current smokers was lower among patients with non-exacerbated COPD and high eosinophil counts (>2%) than among those who did not have eosinophilia [30]. However, as suggested by previous studies [31,32], current smoking was not associated with lower blood eosinophil counts on the first day of hospitalisation. These results suggest that smoking status does not determine whether exacerbations are associated with eosinophilia. Moreover, corticosteroid treatment significantly reduced blood eosinophil counts in both current and ex-smokers, suggesting that smoking status does not influence the role of eosinophils as a biomarker for treating COPD exacerbations.
The proportion of patients exhibiting exacerbations or mortality at 6 months was higher among current smokers (59%) than among ex-smokers (50%). This observation is consistent with results from a previous study, which showed that current smoking status was a better predictor of a shorter time to the next exacerbation than the eosinophil number at the index event [31]. One previous study found that smoking status was not associated with a higher risk of readmission; however, this conclusion may be attributable to the low number of subjects included [33]. We did not investigate this aspect in detail, but smoking may hamper the maintenance treatment that is designed to prevent COPD exacerbation. Notably, these analyses were been adjusted for potential confounders, such as age, lung function, medications, or comorbidities.
The strengths of this study include the randomised study population and complete follow-up of the primary and secondary outcomes. In addition, all patients in the study had a COPD diagnosis that was confirmed by a respiratory medicine specialist and validated at least once a year, as well as a smoking status that was registered at every outpatient visit, reducing the risk of misclassification bias.
This study also had some limitations. First, this post hoc analysis was limited by the retrospective nature of data collection. Second, the small sample size may have been insufficient to power the statistical analysis. Third, our analyses were not adjusted to account for known confounders, which is a potential source of error.

Our results suggest that eosinophil-guided corticosteroid-sparing treatment is equally non-inferior to the standard of care in current smokers and ex-smokers (sensitivity analysis) with regard to primary and secondary outcomes. Because little is known about the impact of smoking status on eosinophil-guided corticosteroid-sparing treatment, more randomised trials are needed to confirm our results. Although smoking status did not influence the role of eosinophils as a biomarker in guiding corticosteroid treatment, current smokers are at higher risk of readmission; therefore, smoking cessation should be considered for all patients admitted with COPD exacerbations.

The CORTICO-COP trial was funded by The Danish Regions Medical Fund and the Danish Council for Independent Research. The research salary for P.S. was provided by Herlev-Gentofte University Hospital.

The study was conducted according to the guidelines of the Declaration of Helsinki and approved by the Ethics Committees of all participating sites (H-15012207), the Danish Medicines Agency (EudraCT no. 2015–003441-26) and the Danish Data Protection Agency (HGH-2015-038 and I-Suite number 04014). The study was monitored for Good Clinical Practice (GCP) by the GCP unit of the Capital Region of Denmark. Written informed consent was obtained from patients before randomisation.

We think that knowledge sharing increases the quantity and quality of scientific results. Sharing of relevant data will be discussed within the study group upon reasonable request.

We would like to thank all the relevant departments in the Capital Region of Denmark for allowing us to recruit patients. We thank the COP: TRIN (coptrin.dk) Steering Committee for providing input and advice during meetings. A.B., A.M., and J.V. are supported by the NIHR Manchester BRC. 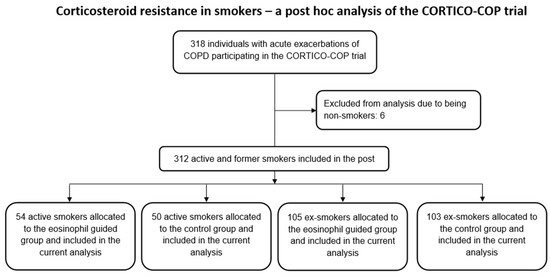 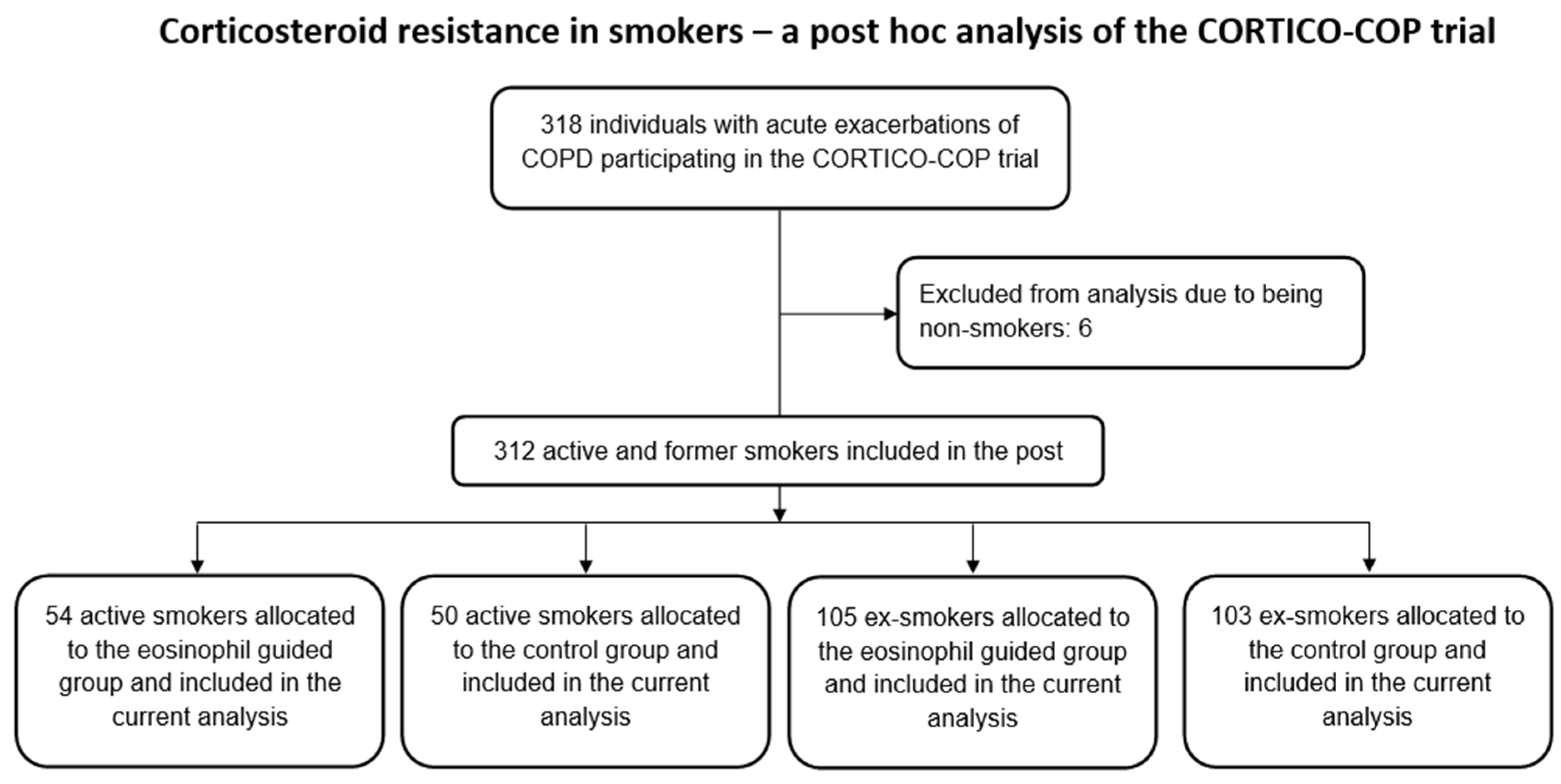 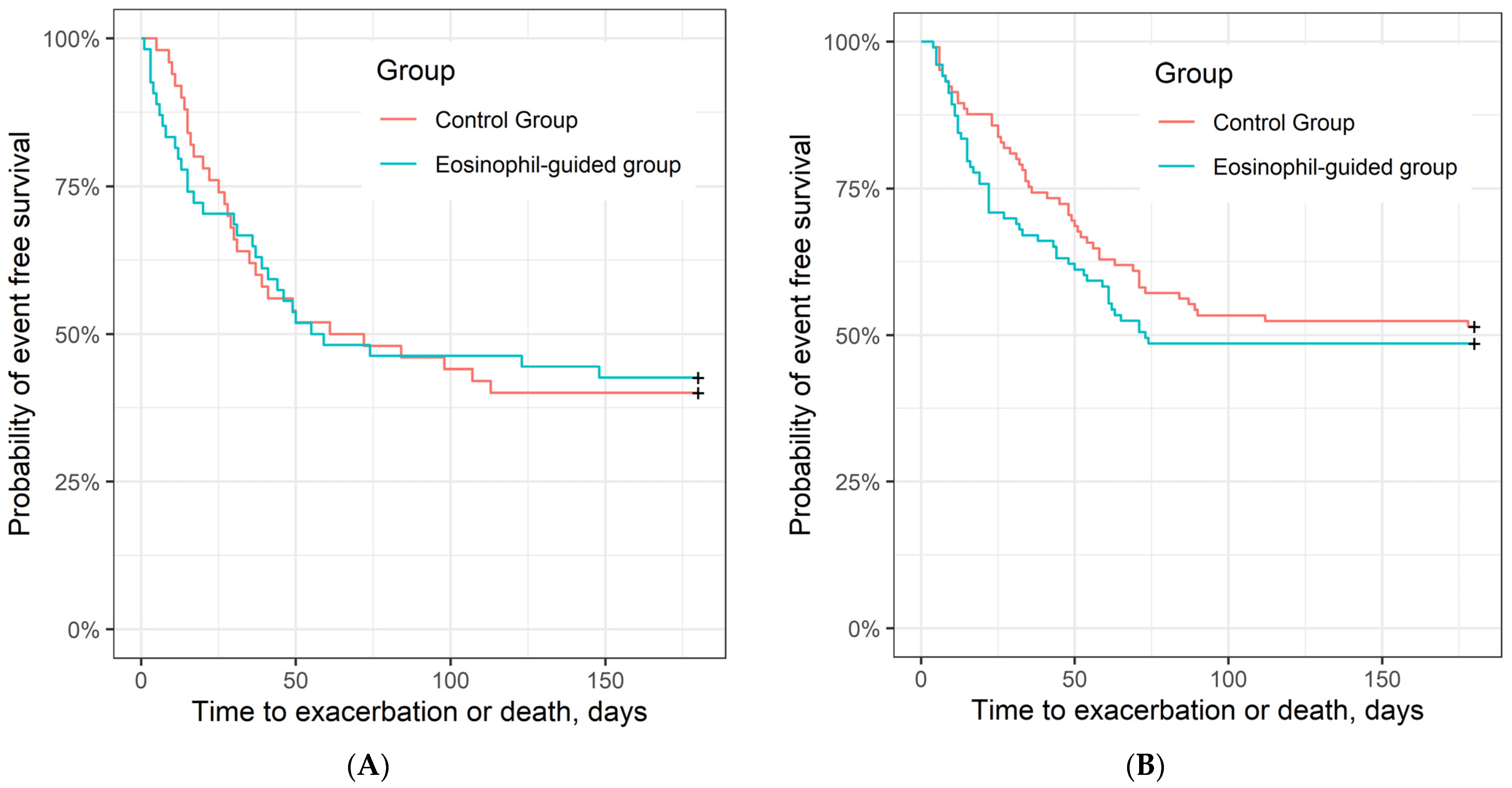 Table 3. Sensitivity analysis of ex-smokers.
Table 3. Sensitivity analysis of ex-smokers.
Abbreviations: CI, confidence interval; DAOH14, days alive and out of hospital within 14 days; CAT, COPD Assessment Test; FEV1, forced expiratory volume in 1 s; HR, hazard ratio; OR, odds ratio; ICU, intensive care unit; SD, standard deviation.
© 2021 by the authors. Licensee MDPI, Basel, Switzerland. This article is an open access article distributed under the terms and conditions of the Creative Commons Attribution (CC BY) license (https://creativecommons.org/licenses/by/4.0/).
We use cookies on our website to ensure you get the best experience. Read more about our cookies here.
Accept
We have just recently launched a new version of our website. Help us to further improve by taking part in this short 5 minute survey here. here.
Never show this again