B-Type Natriuretic Peptides and High-Sensitive Troponin I as COVID-19 Survival Factors: Which One Is the Best Performer?

Increased concentrations of B-type natriuretic peptide (BNP), N-terminal pro-B-type natriuretic peptide (NT-proBNP) and high-sensitivity troponin I (HsTnI) in COVID-19 patients have already been reported. The aim of this study is to evaluate which of these common markers of cardiac disease is the most useful predictor of fatal outcome in COVID-19 patients. One hundred and seventy-four patients affected with COVID-19 were recruited, and markers of cardiac disease and the clinical history of the patients were collected at admission in the infectious disease unit or intensive care unit. NT-proBNP, BNP and HsTnI values were higher in in-hospital non-surviving patients. Receiver operating characteristic (ROC) curve analysis of NT-proBNP, BNP and HsTnI was performed, with NT-proBNP (AUC = 0.951) and HsTnI (AUC = 0.947) being better performers (p = 0.01) than BNP (AUC = 0.777). Logistic regression was performed assessing the relation of HsTnI and NT-proBNP to fatal outcome adjusting for age and gender, with only NT-proBNP being significant. The population was then divided into two groups, one with higher NT-proBNP values at admission than the cut-off resulted from the ROC curve (511 ng/L) and a second one with lower values. The Kaplan–Meier analysis showed an absence of fatal outcome in the group of patients with NT-proBNP values lower than the cut-off (p < 0.001). NT-proBNP proved to be the best prognostic tool for fatal outcome among markers of cardiac disease in COVID-19 patients. View Full-Text
Keywords: COVID-19; BNP; NT-proBNP; troponin; prognostic markers; fatal outcome COVID-19; BNP; NT-proBNP; troponin; prognostic markers; fatal outcome
►▼ Show Figures 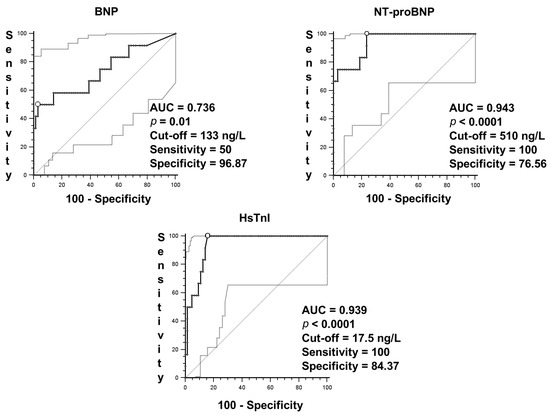