Effects of Monotherapy with Clopidogrel vs. Aspirin on Vascular Function and Hemostatic Measurements in Patients with Coronary Artery Disease: The Prospective, Crossover I-LOVE-MONO Trial
Next Article in Special Issue

:
Ultrasound has become widely used as a means to measure the rectus femoris muscle in the acute and chronic phases of critical illness. Despite its noninvasiveness and accessibility, its accuracy highly depends on the skills of the technician. However, few ultrasound phantoms for the confirmation of its accuracy or to improve technical skills exist. In this study, the authors created a novel phantom model and used it for investigating the accuracy of measurements and for training. Study 1 investigated how various conditions affect ultrasound measurements such as thickness, cross-sectional area, and echogenicity. Study 2 investigated if the phantom can be used for the training of various health care providers in vitro and in vivo. Study 1 showed that thickness, cross-sectional area, and echogenicity were affected by probe compression strength, probe angle, phantom compression, and varying equipment. Study 2 in vitro showed that using the phantom for training improved the accuracy of the measurements taken within the phantom, and Study 2 in vivo showed the phantom training had a short-term effect on improving the measurement accuracy in a human volunteer. The new ultrasound phantom model revealed that various conditions affected ultrasound measurements, and phantom training improved the measurement accuracy.
Keywords:
ultrasonography; muscles; quadriceps muscle; sarcopenia; education

Skeletal muscle is important to surviving critical illnesses [1]. At the intensive care unit (ICU) admission, higher muscle mass is associated with decreased mortality [2]. After the ICU admission, progressive muscle atrophy occurs, and the atrophy is associated with ICU acquired weakness and mortality [3]. Every 1% loss of muscle mass is associated with 5% higher odds ratio of 60-day mortality in critical illness [4]. In the chronic phase, 73% of patients demonstrated persistent muscle atrophy at 6 months after ICU discharge [5]. Furthermore, muscle atrophy progresses 6 to 12 months after ICU discharge [6].
Muscle mass assessment is important to manage nutrition and rehabilitation [7]. Although numerous ways to measure muscle mass currently exist [8], ultrasound has been gaining popularity for muscle mass assessment in critically ill patients [9]. The rectus femoris muscle correlates with whole-body muscle mass [10] and physical functions [11]; thus, ultrasound assessment is often conducted at this point. Although ultrasound is known to be noninvasive and accessible, even at the bedside, accurate measurement requires a high degree of skill and experience [12]. Therefore, an urgent need for a well-established method of measurement and training is present to promote accurate measurements.
However, there are insufficient training opportunities in musculoskeletal ultrasound [13]. Ultrasound training often uses phantom models, which artificially mimic organ structures with adjusted acoustic properties. Despite the existence of cardiac or abdominal ultrasound phantom models [14,15], few ultrasound phantom models exist for the measurement of the rectus femoris muscle. Several ultrasound phantoms were created for muscle quality assessments [16,17], but not for muscle quantity assessments. As a phantom model has a predetermined muscle size, it can be used for the assessment of accurate measurements. It is important to assess how probe angle, compression strength, and a different device can affect muscle mass measurements. Moreover, predetermined echogenicity can be used to assess how various conditions change echogenicity. Furthermore, authors need to know whether measurement accuracy is improved with the use of the phantom as a training device to teach established methods. Phantom training can improve ultrasound skills and reduce the scanning time to obtain a clear ultrasound image [18]. Due to the noninvasiveness, ultrasound can be used by various levels of health care providers [19]. Therefore, ultrasound techniques are important for most health care providers, including physical therapists, nurses, and nutritionists. Thus, the creation of a training phantom is important.
In this study, the authors devised a training phantom model for measuring rectus femoris muscle mass. Using this phantom, the authors evaluated whether ultrasound measurements were affected by various measurement conditions and if this model could be used for the training of the measurement of rectus femoris muscle mass. In Study 1, the authors used the phantom model for evaluating the accuracy of thickness, cross-sectional area, and echogenicity measurements in different settings including different compression, angle, and equipment. Then, in Study 2, the authors used the phantom to train various health care providers and tested whether it would improve the accuracy of the measurements in vitro and in vivo.

The authors collaborated with Kyoto Kagaku (Kyoto, Japan) to create a phantom model from February to August 2020. Then, the authors applied the phantom model to research and training purposes in Tokushima University Hospital from September 2020 to January 2021. This study was approved by a clinical research ethics committee of Tokushima University Hospital (approval number 2593). At the time of enrollment, written informed consent was obtained from the volunteers.

The authors have created a novel phantom model of the lower limb primarily for measuring the rectus femoris muscle. The phantom is designed to be a cylindrical shape for training purposes. The size is 22.0 cm in length, 11.6 cm in width, and 6.8 cm in height (Figure 1A). The two-dimensional structure is a concentric semicircular structure (Figure 1B). The size written in the figure is that of the design, which is not exactly equivalent to the actual size. The structure contains the rectus femoris, vastus medialis, vastus lateralis, and vastus intermedius muscles, as well as the femur and subcutaneous tissue. The authors demonstrate the scanning image with a linear probe at the cross-sectional and longitudinal direction (Figure 1C,D).
This phantom is composed of urethane modified to be suitable for ultrasound scanning. The modification was conducted by adjusting acoustic sound impedance. Then, these parts were constructed in the design mentioned above. The constructed phantom was stabilized by 10 mm and 12 mm of rigid urethane foam at the lateral side and bottom, respectively. The surface of the phantom was coated with silicon. The cross-sectional image of the phantom is close to the scanning at one-third to one-half from the proximal end of the patella to the anterior superior iliac spine. Acoustic characteristics of phantom material were measured by Sing-around unit and solid measuring cell (UVM-2 and XM-0031, Cho-Onpa Kogyo, Tokyo, Japan) in cross-sectional and longitudinal section. As a result, sound speed was 1432 m/s, density 0.954 g/cm3, attenuation coefficient 0.59 dB/cmMHz, acoustic impedance 1.37 rayl at 25 °C. After the measurement, the material was adjusted to mimic muscle tissue about the ultrasound image and subjective compression feeling.

This study was conducted to evaluate whether the use of the phantom would improve ultrasound techniques. The authors included two volunteers from five different occupations including physicians, nurses, physical therapists, nutritionists, and medical students. A total of 10 volunteers, who did not have experience in measuring muscle mass, conducted the measurements of the thickness and cross-sectional area of the rectus femoris. The measurements were conducted in three stages. First, the examiners conducted the measurement by themselves without assistance. Second, the examiners conducted the measurements with the assistance of N.N. Six measurement points, which were considered to influence ultrasound measurements from Study 1 (Table 1) were taught. At these points, the compression of muscle was intentionally avoided by using generous amounts of gel and no compression. The probe position was set at a perpendicular angle, and the stabilized position was held by the contact of the examining hand on the phantom.
At this stage, inadequate measurement techniques were fixed by N.N. Third, the volunteers scanned the phantom by themselves without assistance. Each measurement consisted of 5-min intervals. The authors evaluated the percentage change from the base measurements in each stage.

This research was funded by a crowdfunding project entitled the Muscle Atrophy Zero Project, using the platform “Otsucle” <https://otsucle.jp/cf/project/2553.html>. This work was partially supported by JSPS KAKENHI Grant Number JP20K17899.

The study was conducted according to the guidelines of the Declaration of Helsinki, and approved by the Ethics Committee of Tokushima University Hospital (approval number 2593).

Informed consent was obtained from all volunteers involved in the study.

The authors thank Keiji Kawamura and Takehiro Tsugawa (Department of Rehabilitation Technology, Tokushima Prefectural Central Hospital) for their cooperation and support during the study, and Kyoto Kagaku (Kyoto, Japan) for creating this phantom model, and people who supported the nonprofit crowdfunding of Muscle Atrophy Zero Project, which aims to prevent muscle atrophy in critically ill patients. This work was partially supported by JSPS KAKENHI Grant Number JP20K17899. 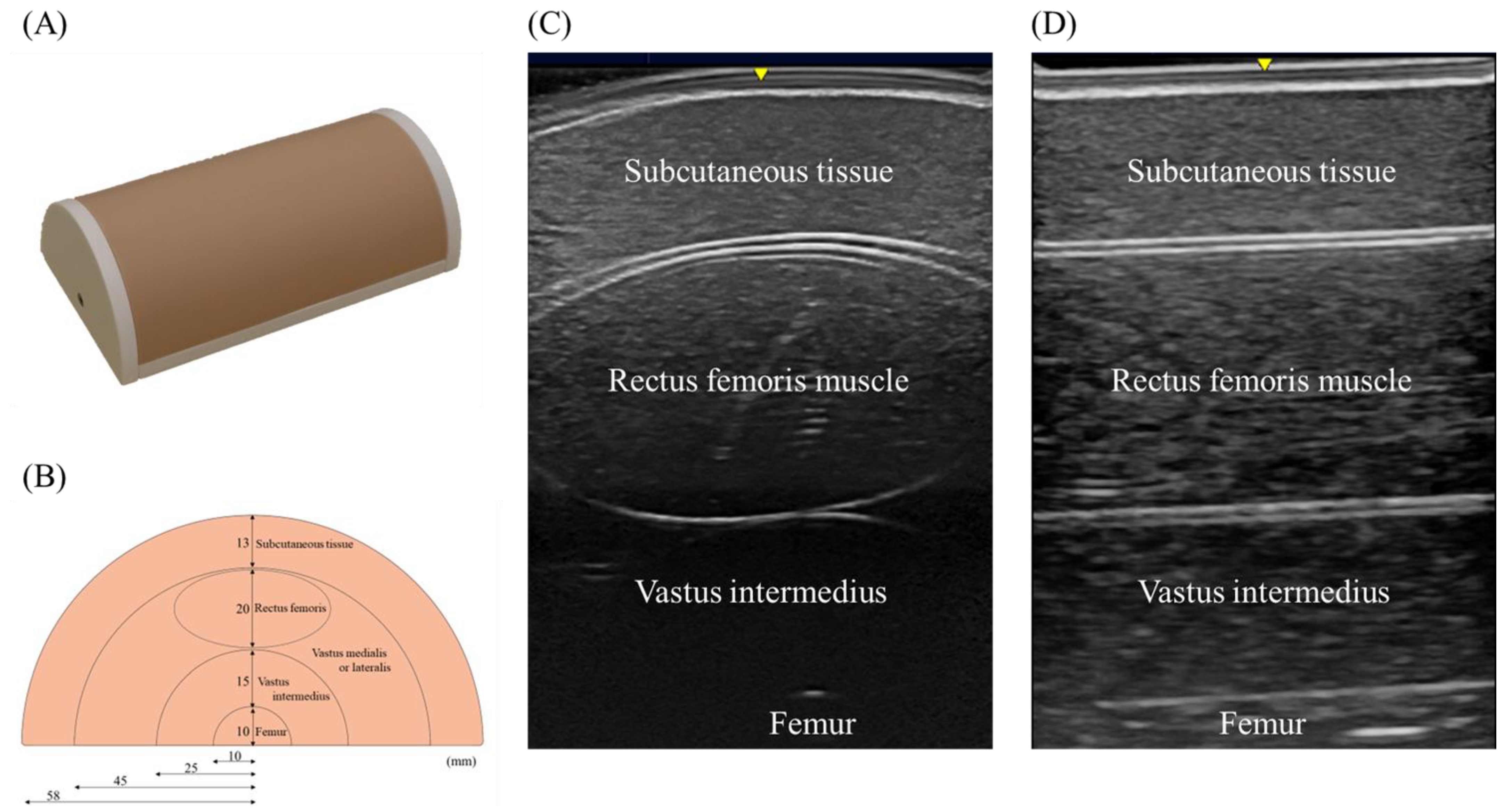 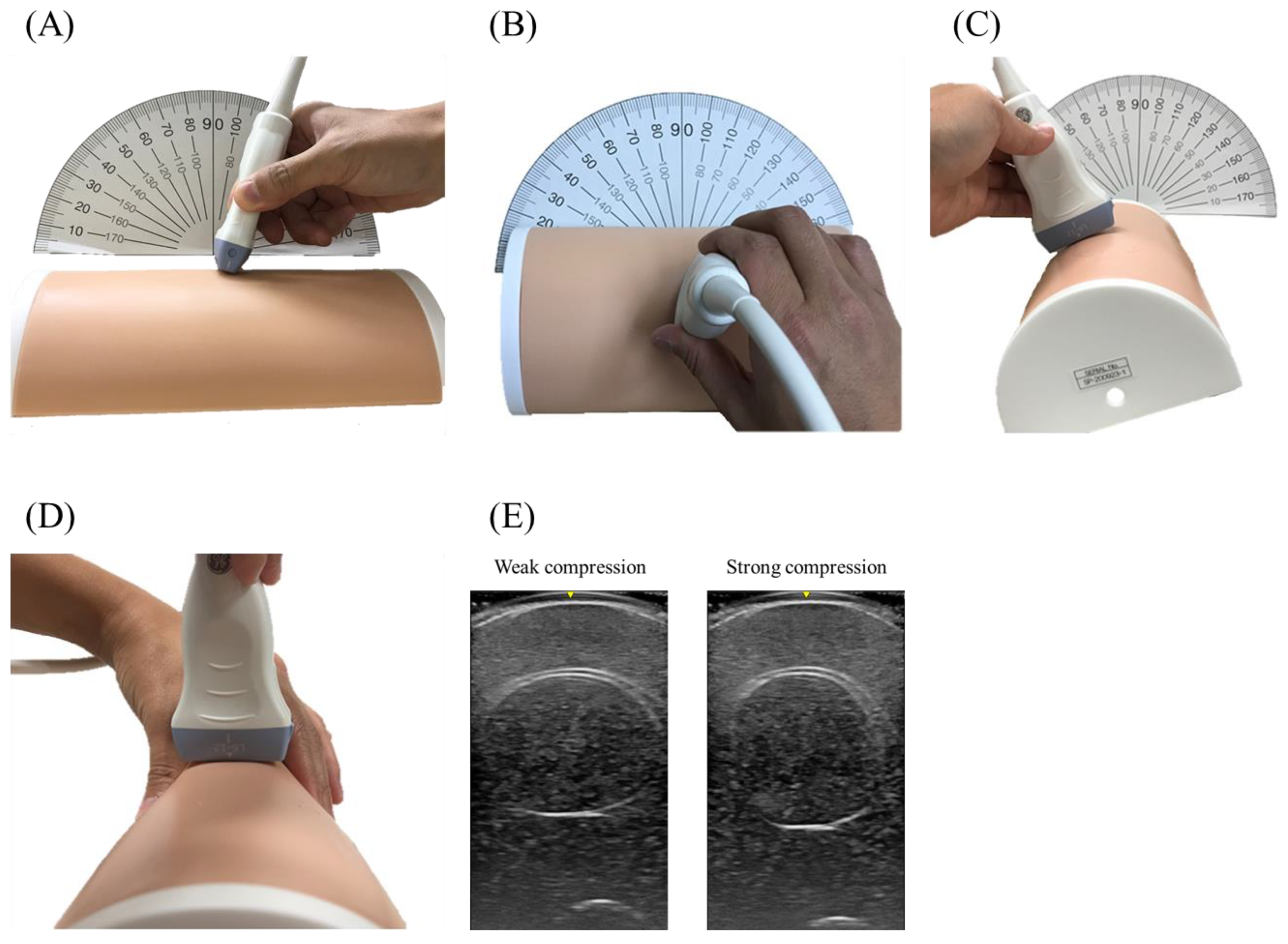