Membrane Fouling Due to Protein—Polysaccharide Mixtures in Dead-End Ultrafiltration; the Effect of Permeation Flux on Fouling Resistance

Significant gaps exist in our knowledge of ultrafiltration (UF) membrane fouling, due to mixtures of poly-saccharides and proteins, despite a fair amount of related research. To get new insights into fouling layer characteristics, experiments were performed under constant-flux, within the range of practical interest (15–90 L/m2h), with typical polysaccharides (sodium alginate, SA), proteins (bovine serum albumin, BSA) as well as their mixtures in various proportions (1:3, 1:1, 3:1), and total organic matter concentration of 30 mg/L. The feed-water salinity and calcium ion concentration were 2000 mg/L NaCl and 2 mM, respectively. The temporal evolution of such fouling layers on flat-sheet membranes was monitored by recording the trans-membrane pressure variation. The results show that the specific fouling resistance α is strongly affected by flux, and the fouling propensity of polysaccharide-protein mixtures is significantly enhanced compared to single foulants, i.e., when BSA and SA are alone. The fouling layers are compressible and their resistance α tends to increase with the mass ratio of alginate in the mixture, particularly at high fluxes. To quantify these effects, correlations are presented of the initial fouling resistance αi with permeate flux J and of the evolution of α. R&D priorities are suggested on this topic of mixed foulants. View Full-Text
Keywords: dead-end ultrafiltration; combined polysaccharide-protein fouling; specific fouling resistance; correlation with permeate flux; compressibility effects dead-end ultrafiltration; combined polysaccharide-protein fouling; specific fouling resistance; correlation with permeate flux; compressibility effects
►▼ Show Figures 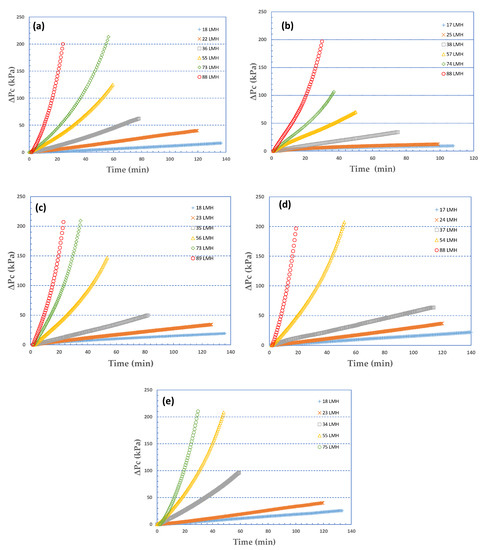