Microalgae in Food-Energy-Water Nexus: A Review on Progress of Forward Osmosis Applications
Next Article in Special Issue

Tangential Flow Filtration for the Concentration of Oncolytic Measles Virus: The Influence of Filter Properties and the Cell Culture Medium

We performed molecular dynamics simulations of water molecules inside a hydrophobic membrane composed of stacked graphene sheets. By decreasing the density of water molecules inside the membrane, we observed that water molecules form a droplet through a hydrogen bond with each other in the hydrophobic environment that stacked graphene sheets create. We found that the water droplet translates as a whole body rather than a dissipate. The translational diffusion coefficient along the graphene surface increases as the number of water molecules in the droplet decreases, because the bigger water droplet has a stronger van der Waals interaction with the graphene surface that hampers the translational motion. We also observed a longer hydrogen bond lifetime as the density of water decreased, because the hydrophobic environment limits the libration motion of the water molecules. We also calculated the reorientational correlation time of the water molecules, and we found that the rotational motion of confined water inside the membrane is anisotropic and the reorientational correlation time of confined water is slower than that of bulk water. In addition, we employed steered molecular dynamics simulations for guiding the target molecule, and measured the free energy profile of water and ion penetration through the interstice between graphene sheets. The free energy profile of penetration revealed that the optimum interlayer distance for desalination is ~10 Å, where the minimum distance for water penetration is 7 Å. With a 7 Å interlayer distance between the graphene sheets, water molecules are stabilized inside the interlayer space because of the van der Waals interaction with the graphene sheets where sodium and chloride ions suffer from a 3–8 kcal/mol energy barrier for penetration. We believe that our simulation results would be a significant contribution for designing a new graphene-based membrane for desalination. View Full-Text
Keywords: graphene; molecular dynamics simulation; membrane; free energy; desalination graphene; molecular dynamics simulation; membrane; free energy; desalination
►▼ Show Figures 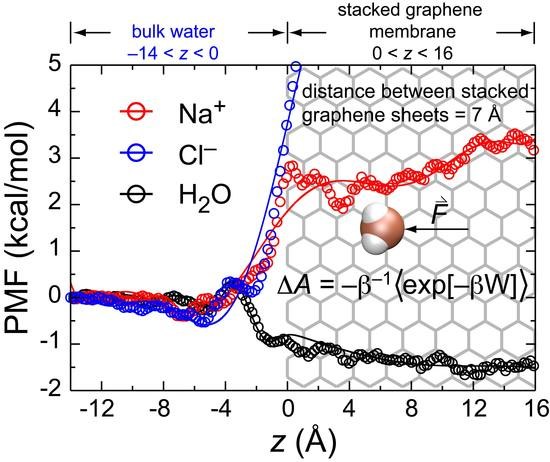