Review of Membranes for Helium Separation and Purification

Membrane gas separation has potential for the recovery and purification of helium, because the majority of membranes have selectivity for helium. This review reports on the current state of the research and patent literature for membranes undertaking helium separation. This includes direct recovery from natural gas, as an ancillary stage in natural gas processing, as well as niche applications where helium recycling has potential. A review of the available polymeric and inorganic membranes for helium separation is provided. Commercial gas separation membranes in comparable gas industries are discussed in terms of their potential in helium separation. Also presented are the various membrane process designs patented for the recovery and purification of helium from various sources, as these demonstrate that it is viable to separate helium through currently available polymeric membranes. This review places a particular focus on those processes where membranes are combined in series with another separation technology, commonly pressure swing adsorption. These combined processes have the most potential for membranes to produce a high purity helium product. The review demonstrates that membrane gas separation is technically feasible for helium recovery and purification, though membranes are currently only applied in niche applications focused on reusing helium rather than separation from natural sources.
Keywords: helium; membranes; polymeric; selectivity; process helium; membranes; polymeric; selectivity; process

Helium is a noble gas that has a wide range of applications in important scientific, medical and industrial applications [1,2]. These industries take advantage of helium’s very low boiling temperature and chemically inert nature [3]. Helium’s largest usage is as a coolant in magnetic resonance imaging (MRIs) in hospitals, as well as an inert gas in welding, a carrier gas in analytical and scientific equipment, helium/oxygen mixtures for deep-sea SCUBA divers and in pressurizing and purging of pressure vessels, such as in rocket technology. Only ~8% of the global helium market is for party balloons [1].
The global demand for helium is growing, driven mainly by demand in Asia, especially in the developing economics of China and India [1]. The global usage of helium has grown by 990 million cubic feet from 2000 to 2015, and as such the helium price has risen from US$50 to US$104 per thousand cubic feet in that time [4,5]. To meet this demand new helium production facilities have recently been commissioned in Qatar and Australia [6]. However, global production is anticipated to fall short of global demand over the coming decades [2]. The increase in the helium price is expected to make low quality helium reserves attractive and drive further interest in helium recovery and recycling in existing industries. However, conventional technologies for helium recovery and purification rely on cryogenic liquefaction followed by pressure swing adsorption (PSA), both of which are energy intensive, especially as the helium concentration decreases in the feed [7]. As such, alternative technologies that can separate and purify helium will increasingly be investigated because of the economic advantage they might potentially have over the conventional approach. Membrane gas separation is one such technology that has significant potential in processing and purifying helium. This review discusses the sources of helium that are currently used, as well as potential recycling applications, which present niche opportunities for membranes. The current state of polymeric and inorganic membranes for helium separation is presented and analyzed. A major focus of the review is the discussion of membrane process strategies for helium recovery, including those presented in the patent literature, given the importance of the membrane process in gas separation economics [8]. Hence, this review aims to inform the membrane research community on the potential application of helium separation.

Natural gas is the primary source of helium for commercial purposes, where it has accumulated over eons as the result of radioactive decay of uranium and thorium in the Earth’s interior [3]. The largest reserves of helium-rich natural gas fields exist in Western USA, where helium is commercially separated through cryogenic liquefaction and pressure swing adsorption [3]. The helium concentrations are generally <1%, but high quality fields in New Mexico and Alaska USA have helium compositions of 4.05 and 2.54% respectively [3]. Other helium-rich commercial natural gas fields exist in Qatar, Australia, Poland and Algeria, and potential fields exist in Russia, Iran, Italy, Tanzania and India, with a limited list of fields around the world provided in Table 1. The most important fields in the USA are the Hugoton-Panhandle field located across Texas, Oklahoma and Kansas as well as the LaBarge field in Wyoming [9]. Separation of helium from air has only been suggested under the most extreme situations, because the concentration is 5.2 ppm [1].
Recycling sources of helium are associated with leakages and waste gas from applications such as pressure tank testing [1]. These generally consist of helium with a mixture of air, with a much higher helium concentration than found in natural gas. The helium concentrations in these applications can be up to 99%, but is often diluted with air due to direct exposure to the environment. However, the quantity of gas to be treated is generally very small and present only in niche industries. For example, helium leakage from modern MRIs is very low and helium pressure tank testing is intermittent. Hence, in many of these industries the focus is on reducing helium wastage.
The separation of helium from natural gas using membranes has been discussed and demonstrated since membranes were first commercially proven as a technology [11]. However, to the best of the authors’ knowledge, no large scale membrane plant currently exists that separates and purifies helium from natural gas. In part this is because pressure swing adsorption (PSA) dominates the industry [6]. Similarly, the recycling and purification of helium from industrial processes, such as coolant leakage and waste gas from pressure vessels is technically possible through membrane separation. The advantage of membranes in recycling processes is clearly demonstrated by the range of commercial membrane processes currently available for helium recovery from localized sources [12,13,14].

Inorganic membranes have also been investigated for helium separation; the performance of a number of them is provided in Table 3. Inorganic membranes have a number of advantages over polymeric membranes, for example their ability to withstand harsher conditions such as high temperatures and corrosive gases [43]. However, the focus in the literature is on hydrogen separation, with helium permeation being one of the gases used in characterization rather than as a specific application. All of the inorganic membranes presented here are porous and hence it is difficult to achieve the selectivities observed for polymeric membranes (Table 2). The inert nature of helium means that surface diffusion and capillary condensation will not occur for porous membranes. However, many of the reported inorganic membranes have selectivities above the Knudsen diffusion selectivity (He/N2 is 1.9, He/CH4 is 2) [44] indicating that molecular sieving is occurring, where the kinetic diameter of He is 2.6 Å, N2 is 3.64 Å and CH4 is 3.8 Å [45].
Metal organic framework (MOF) membranes provide high selectivities for inorganic-based membranes, in part because the framework morphology can be specially designed to enable helium diffusivity while hindering other gases permeation. Similarly, microporous silica prepared by silica sol deposition on alumina support layer membranes achieve very high helium permeances and selectivities [53,54]. This is because the resulting silica pores’ diameters are of molecular size and hence excellent molecular sieving is achieved, while the deposition technique is able to fabricate a consistent layer without any defects. Thus, there is potential for microporous silica membranes to also produce high purity helium product from many of the aforementioned sources, however fabrication on large scales remains an issue. To the best of the authors’ knowledge no commercial inorganic membrane module exists for helium separation. Inorganic membranes will be an active area of research into the future, however it is expected that helium separation will be considered a minor application.

This review examines the current state of the literature for helium recovery and purification by membrane gas separation. The major developments in membranes technology will be in process developments, as currently available polymeric and inorganic membranes have the required permselectivity to achieve the desired separation in many of the potential helium recovery situations. Helium can be sourced from natural gas and related gas processing, as well as from the recycle and recovery associated with niche industrial applications. A wide range of polymeric membranes have been investigated for helium separation, with standard Robeson plot behavior observed against nitrogen and methane. Inorganic membranes have also been reported for helium separation, though their selectivities are lower than polymeric membranes because of their porous nature. A range of membrane process designs have been reported for recovery and purification of helium. Two and three stage membrane processes can recover helium directly from natural gas as well as from the nitrogen rejection unit exhaust gas, though they require considerable compression duties. The patent literature has a strong focus on combined processes where membranes are in a series with another separation technology to achieve both high helium recovery and high helium purity in the final product. This other separation technology is most often pressure swing adsorption, and the gas stream switching and connectivity between the PSA unit and membrane are of particular interest to reduce the energy duty of helium recovery and increase the viability of the process design.

Colin A. Scholes and Ujjal K. Ghosh reviewed and analyzed the literature equally, as well as wrote the paper together. 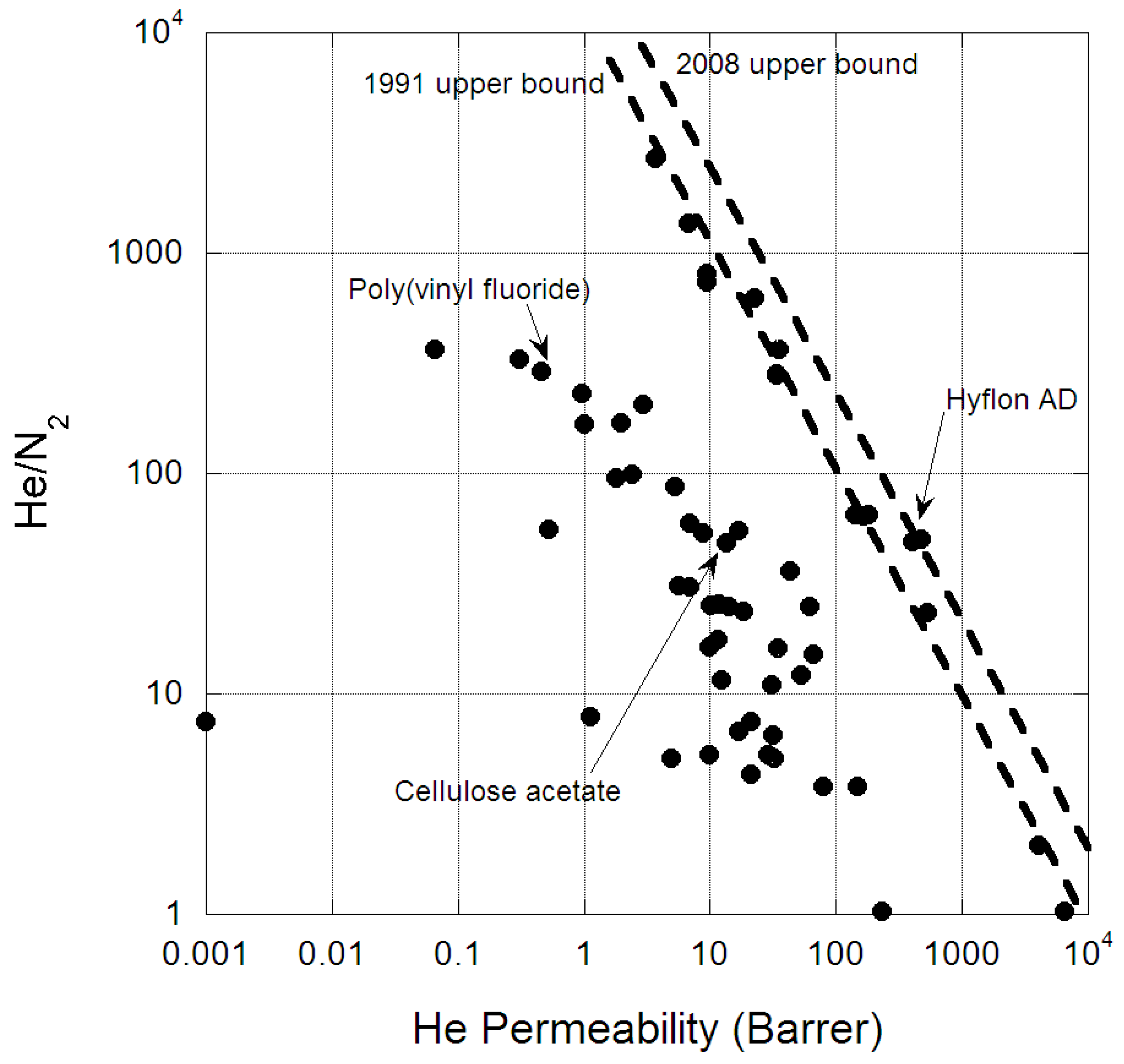 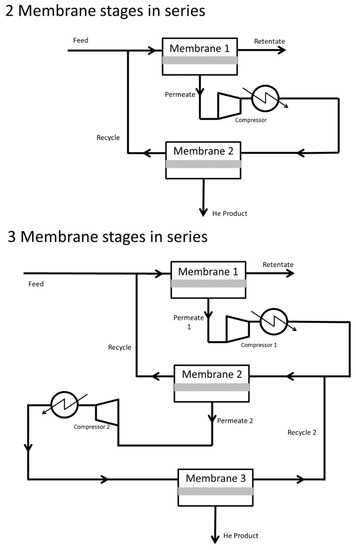 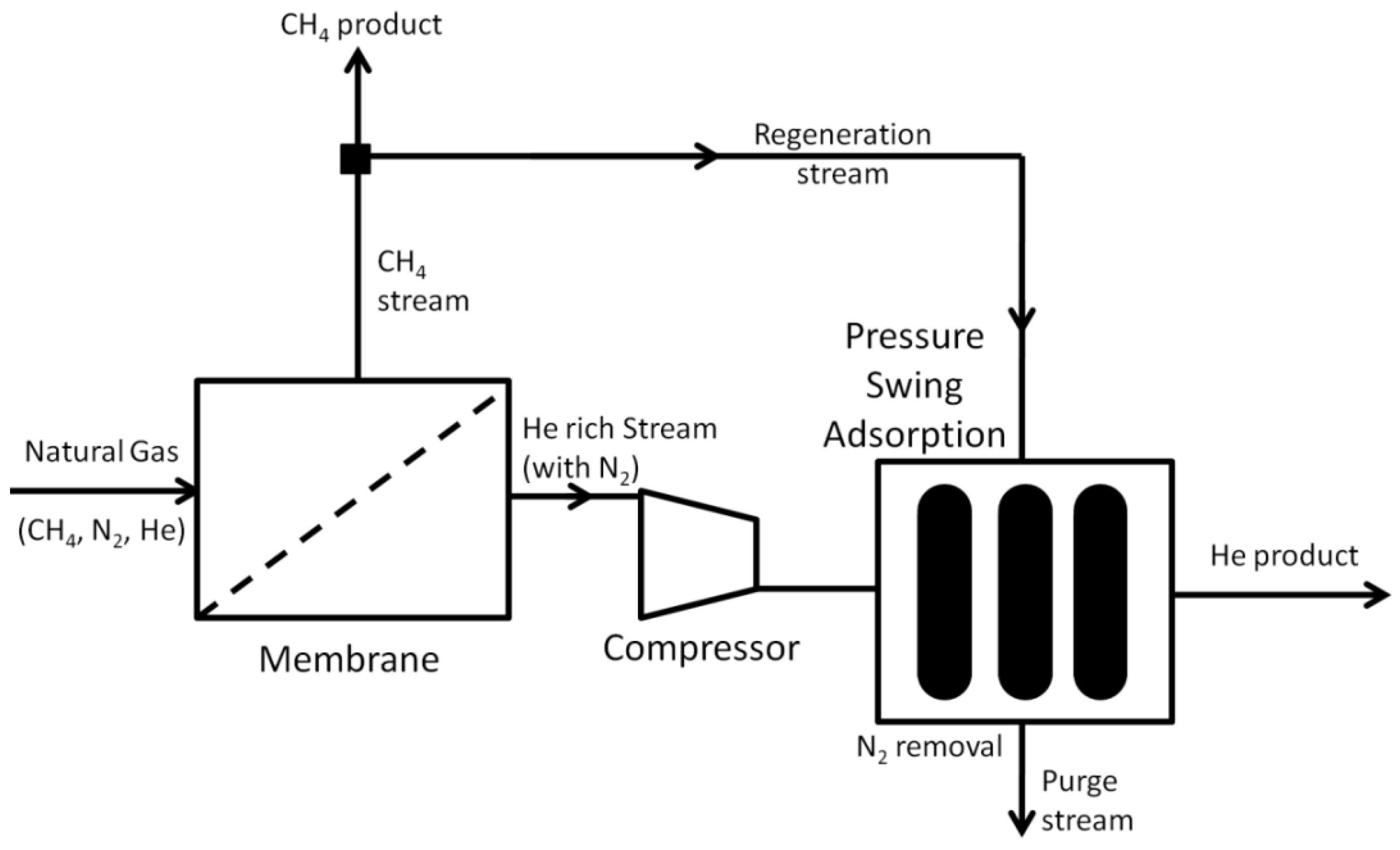 Table 2. He permeability (Barrer), He/N2 and He/CH4 selectivities in a range of polymeric membranes.

Table 3. He permeance (GPU), He/N2 and He/CH4 selectivities in a range of inorganic membranes.