As a high-efficiency energy storage system, lithium-ion batteries have excellent performance such as greater energy density, high operational voltage, long cycle life, and low self-discharge rate. They have been widely used in mobile phones, intelligent speakers, notebook computers, electric scooters, and other portable electronic equipment [1,2,3,4,5,6]. With people’s increasing awareness of environmental protection and exhausted fossil oil, electric bicycles and electric vehicles have become the most promising industries. In recent years, incidents of spontaneous combustion and even explosion of mobile power supplies, electric bicycles, and electric vehicles have occurred one after another, which puts forward higher requirements for the safety of lithium-ion batteries [7,8,9,10]. Lithium-ion batteries usually are formed from cathodes, anodes, separators, and electrolytes. As a crucial constituent of the lithium-ion battery, the separator mainly plays a role in isolating cathodes and anodes and allows lithium ions to be transported freely in the lithium-ion battery [11,12]. The low melting point of polyolefin results in the bad thermal stability of polyolefin separators. At the same time, inferior interface compatibility between polyolefin separators and electrolytes leads to junior electrolyte wettability. Therefore, it is essential to develop a separator with prominent thermal stability and excellent wettability for lithium-ion battery applications [13,14].
In recent years, researchers have made extensive efforts to compensate for the shortcomings of polyolefin separators [15,16,17,18,19]. Electrospinning technology can be used to fabricate fibrous membranes with microporous and nanoporous structures. Electrospun fibrous membranes are widely used as separators due to their higher electrolyte absorption rate and excellent wettability with the electrolyte [20,21,22,23]. The commonly used polymers for preparing electrospinning membranes are polyvinylidene fluoride (PVDF) and its copolymers, polyimide (PI), polyacrylonitrile (PAN), etc. [24]. PVDF has a strong electron-withdrawing group (-C-F-), which is conducive to the ionization of lithium salt in the electrolyte, but its high degree of crystallinity will affect its ionic conductivity [20]. PI has good chemical stability and thermal stability due to its rigid aromatic ring and polar imide ring. It is a polymer with good comprehensive performance [25], but its high cost limits its application. The high melting point of PAN makes it have good thermal stability at high temperatures, and the nitrile group (-CN) in PAN is in favor of the dissociation of lithium ions in the electrolyte. Therefore, PAN is used to prepare separator skeletons by electrospinning due to its super thermal stability, good electrochemical properties, and reasonable price. The biggest problem in the application of fiber membranes in lithium-ion batteries is poor mechanical strength [26,27,28,29,30].
Phenoxy resin is a kind of thermoplastic resin, which does not need a curing agent in actual use. ZSM-5 is an aluminosilicate with uniform micropores and three-dimensional intersecting straight channels, with excellent thermal and chemical stability. Zeolites are mostly embedded by coating or blending [31]. Xiao et al. [32] prepared NaA zeolite-embedded polyethylene terephthalate (PET) nonwoven, and the thermal resistance and ionic conductivity were clearly improved due to the NaA zeolite-embedding. Li et al. [33] blended a polyimide (PI) polymer with a high melting point and zeolite (ZSM-5) to fabricate the zeolite/polyimide composite separator via a phase inversion process, with the purpose of enhancing the electrochemical properties and thermal stability of lithium-ion batteries. However, the addition of ZSM-5 significantly reduced the overall strength of the composite separator. It was difficult for ZSM-5 to disperse evenly in the casting liquid. Zhang et al. [34] prepared a zeolite/polyvinylidene fluoride (PVDF) composite separator by a phase inversion process. The result shows that the zeolite/PVDF composite separator exhibits excellent liquid electrolyte wettability, well-developed microstructure, and superior thermal resistance. The phase inversion process requires a large amount of solvent which is difficult to recycle. However, the above-mentioned composite separators made of non-woven fabrics, PI, or other polymers generally have insufficient mechanical strength, which will affect the safety of lithium-ion batteries under high-temperature conditions [35,36]. Phenoxy resin is used as an adhesive to improve the mechanical strength of composite separators because of its excellent mechanical properties and non-toxicity. In this study, a PAN fiber membrane was prepared with the electrospinning technique, phenoxy was introduced to improve the mechanical strength of PAN fiber membranes, and the addition of ZSM-5 was used to improve electrochemical performance. The PAN fiber membrane plays the role of backbone support to provide thermal stability for the separator, the phenolic resin acts as a binder to enhance the mechanical strength and ZSM-5 can improve electrolyte wettability of the composite separator. The results show that the composite separator has excellent mechanical strength and electrochemical properties. The influence of the concentration of ZSM-5 on the mechanical strength and ionic conductivity of the composite separator was researched and selected. Compared with the original PAN fiber membrane and PE separator, the Z/PAN-1.5 composite separator shows enhanced mechanical strength and electrochemical performance.

To prepare the solution for electrospun PAN separator preparation, PAN powder was dissolved in DMF under stirring at room temperature for 12 h to obtain a 10 wt% solution. The electrospinning equipment (ELITE) was provided by Beijing Yongkang Leye Technology Development Co., Ltd. (Beijing, China). Then, under a high voltage of 11 kV, enough solution was taken in the syringe and pushed out at a rate of 0.04 mm/min. During the spinning, the distance between the needle tip and collector was kept at 15 cm. After 11 h of spinning, the pure PAN separator was pressed at 120 °C for 30 min and dried at 80 °C for 12 h to extirpate the remaining solvent. The pure PAN separator is referred to as PAN in subsequent descriptions.

First, a certain amount of phenoxy resin was dissolved in the mixture of DMF/acetone (1:2, v/v) to obtain a 5 wt% phenoxy resin solution. To prepare the solution for dipping, varying amounts of ZSM-5 were dissolved in 5 wt% phenoxy resin solution under ultrasonic for 12 h. The concentrations of ZSM-5 (w/v) were 0%, 0.5%, 1%, 1.5%, and 2%, respectively. The previously prepared pure PAN separator was immersed in the ZSM-5 dispersion with different contents for 20 min and then taken out. The composite separators were first dried at room temperature until there was no obvious liquid on the surface and then dried in an oven at 60 °C for 12 h. For identification, composite partitions containing 0 wt%, 0.5 wt%, 1 wt%, 1.5 wt%, and 2 wt% ZSM-5 were defined as Z/PAN-0, Z/PAN-0.5, Z/PAN-1, and Z/PAN-1.5, Z/PAN-2, respectively.

In the range of 400–4000 cm−1, the Fourier transform infrared spectrum (FTIR, Nexus, Therno Nicolet, Waltham, MA, USA) was applied to demonstrate the presence of phenolic oxygen and ZSM-5 on the separator. The morphologies of composite separators were investigated by scanning electron microscopy (SEM, JSM-IT300, JEOL, Tokyo, Japan) after sputtering a thin layer of gold. The tensile strengths of the separator samples (50 mm × 10 mm) were tested by using a universal testing apparatus (Instron5967, Instron Pty Ltd., Norwood, MA, USA), at a speed of 5 mm·min−1. The contact angles of the separators and electrolytes were measured with a contact angle meter (OCA20, Dataphysics, Filderstadt, Germany). The electrolyte uptake of the separators was calculated by measuring the weight change before and after being soaked in the electrolyte for 2 h, and then calculated by the equation:
Electrolyte uptake (%) = (M − M0)/M0 × 100
where M0 is the weight of the separators without being soaked and M is the weight of the separators after being soaked in an electrolyte.
The thermal stability of the separators was analyzed by a thermogravimetric analyzer–differential scanning calorimeter (TGA–DSC, STA449F3, Netzsch, Selb, Germany) in the temperature range from 40 °C to 800 °C at a heating rate of 10 °C·min−1. The thermal shrinkage of separators was checked by placing membranes in a drying oven at different temperatures from 120 to 180 °C for 30 min. After being heated, the dimensional change was measured by the equation:
Shrinkage (%) = (A0 − A)/ A0 × 100
where A0 (cm2) and A (cm2) are the areas of the separator before and after being heated, respectively.

2.5. Electrochemical Performance of the Composite Separator

The composite separator and PE separator were stamped into discs with a diameter of 19 mm for use. The thickness of the PAN and composite separator used is 45 μm in the test. The electrochemical stability, ionic conductivity, and interfacial resistance (Rint) were measured by using an electrochemical workstation (Ivium Stats, Ivium Technologies, Eindhoven, Netherlands). The thickness of the separator samples was measured with a thickness gauge (CH-1-S, Shanghai liuleng, China). The Rint between the separator sample and lithium metal electrode was carried out by electrochemical impedance spectroscopy (EIS). The ionic conductivity of the separators was also determined by electrochemical impedance spectroscopy (EIS), with two stainless steel electrodes. The tested frequency ranged from 0.1 Hz to 1 MHz with a signal amplitude of 5 mV. The ionic conductivity was calculated by the equation:
σ = d/(R × S)
where d is the thickness of the separators sample, R is the bulk resistance and S is the area of the electrode.
The electrochemical stability was measured in a cell of lithium metal/separator/ stainless steel by using liner sweep voltammetry from 2.5 V to 6.0 V at 5 mV·s−1. For rate performances and cyclability tests, a CR2032 coin-type cell was assembled by sandwiching the separator between a lithium anode and a LiFePO4 cathode and then adding a liquid electrolyte. The measurements were performed by battery-testing equipment (CT2001A, LAND Electronics, Wuhan, China). The cell was cycled at a fixed charge/discharge current density of 0.5 C for 100 cycles. Rate capability test was applied to the discharge of 0.2, 0.5, 1, 2, 3, 5, 7, and 0.2 C, under 2.5–4.2 V.

In this paper, electrospinning technology is used to prepare a PAN separator. After phenoxy resin and ZSM-5 treatment, a Z/PAN-1.5 separator with a tensile strength of 13 MPa is prepared. Due to the excellent thermal stability of the PAN matrix and ZSM-5, the Z/PAN-1.5 separator exhibits satisfactory thermal durability, which is good for the safety of batteries. Simultaneously, it also has superb electrolyte wettability and is low interface resistance. More importantly, the battery assembled with the Z/PAN-1.5 separator shows stable cycle performance and excellent rate performance. In general, the novel composite separator can function as an excellent performance separator, a good substitute for actual Li-ion batteries.

The following are available online at https://www.mdpi.com/article/10.3390/membranes11040267/s1, Figure S1: The size distribution of membrane fiber.

The work was supported by the National Natural Science Foundation of China (51672201). 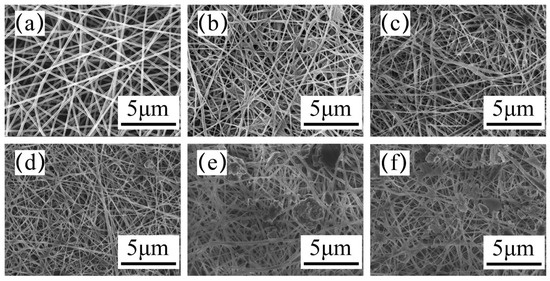 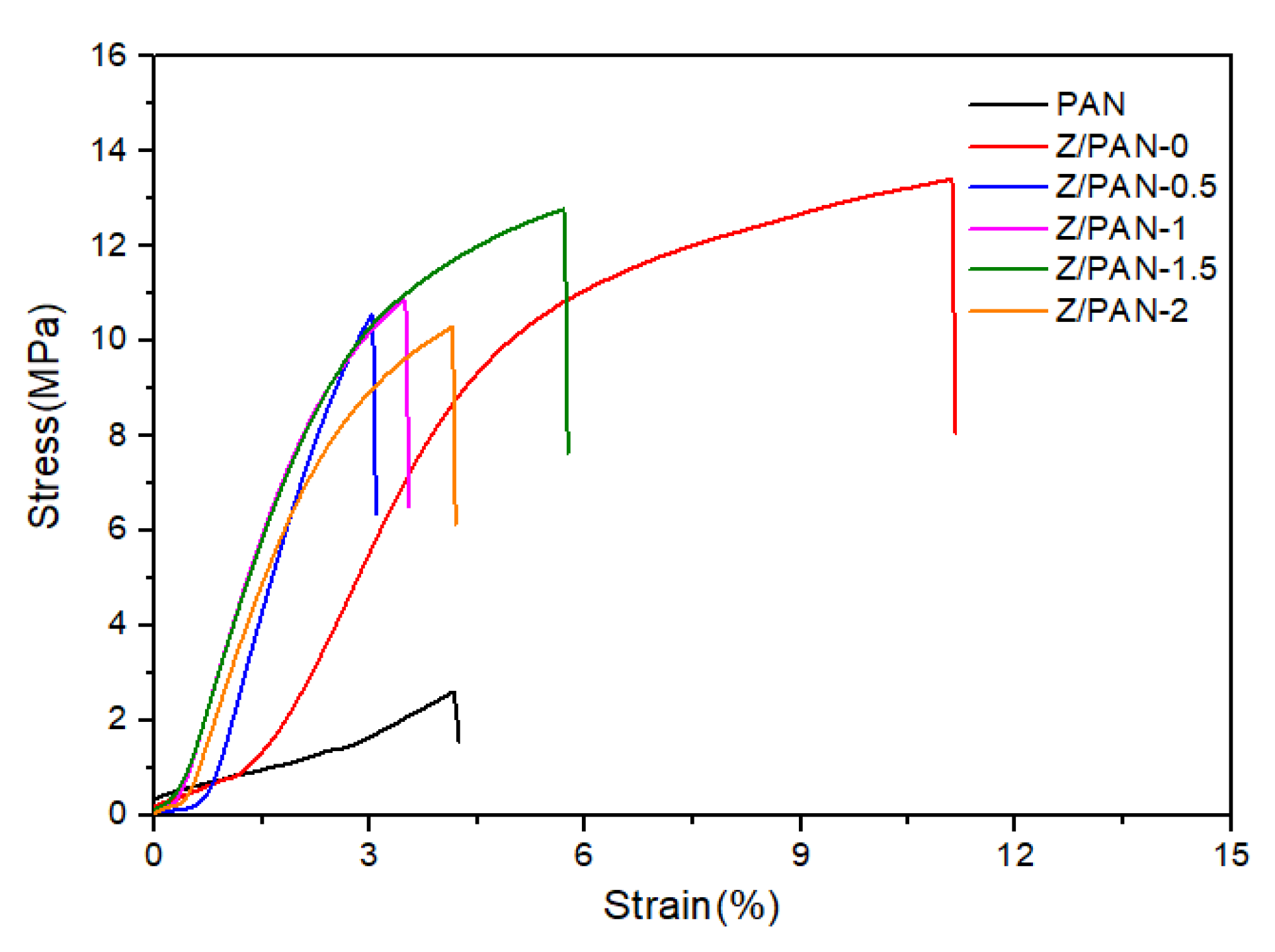 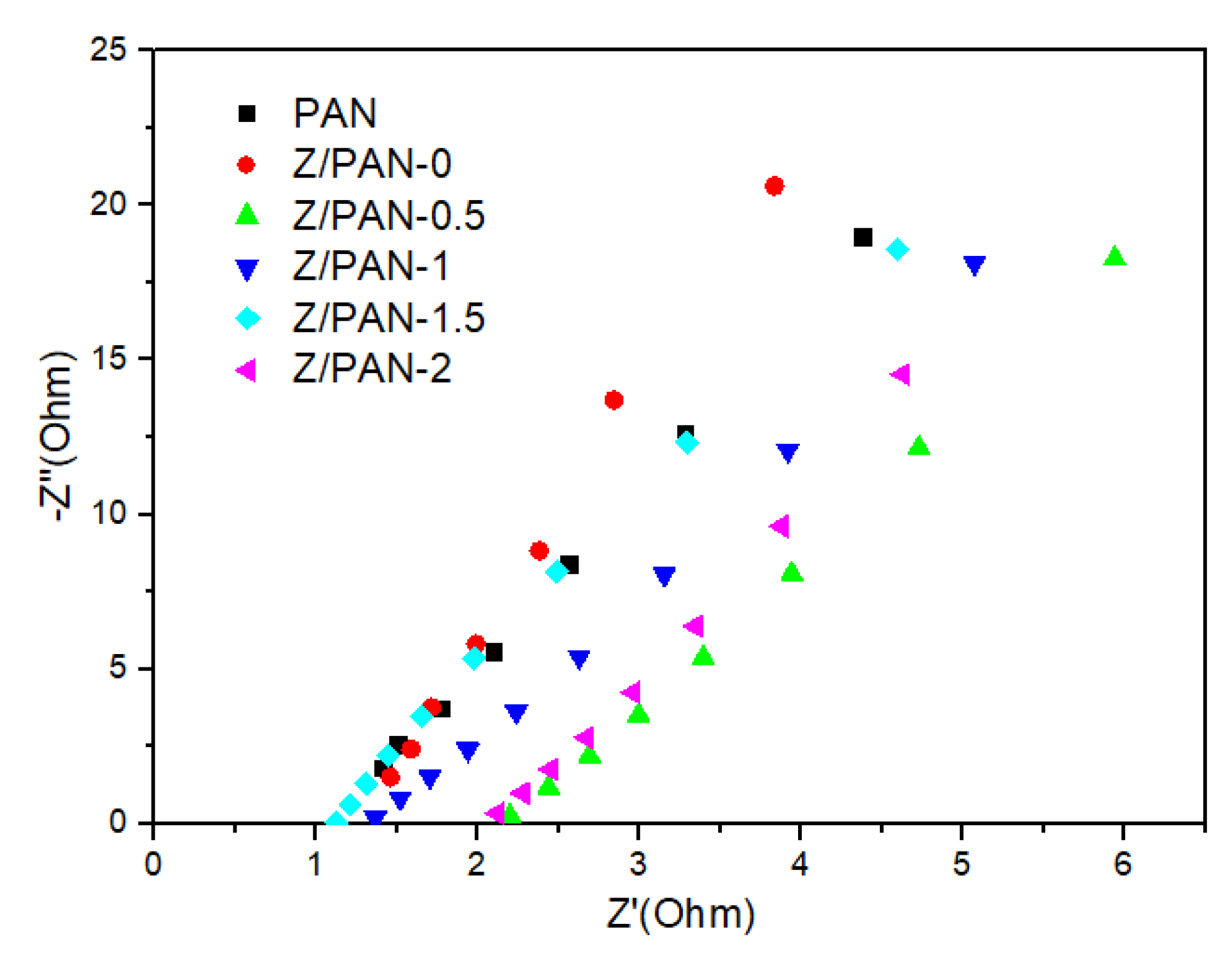 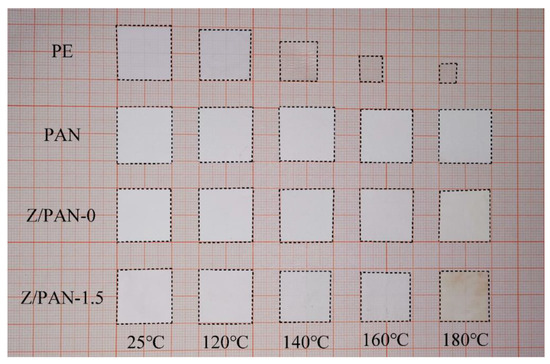 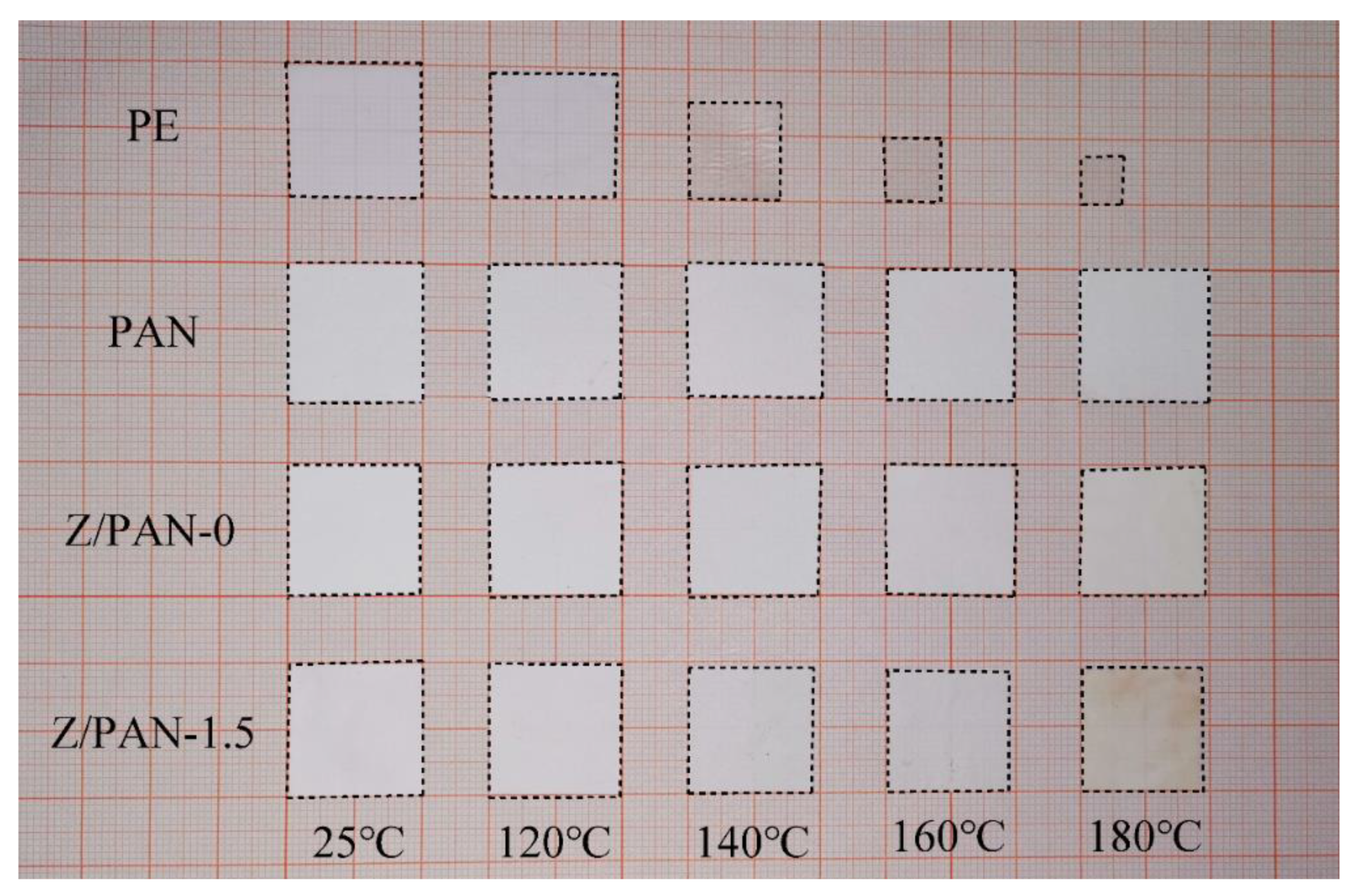 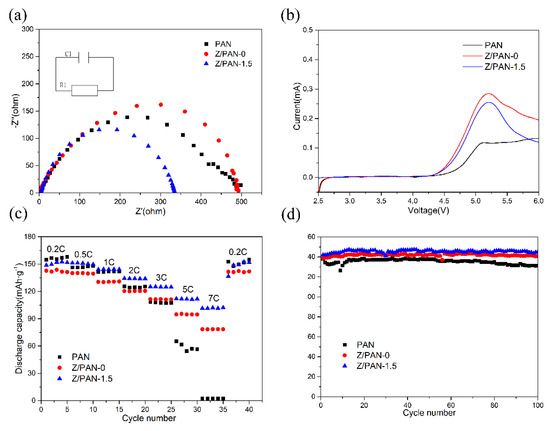