Separation of Alcohol-Water Mixtures by a Combination of Distillation, Hydrophilic and Organophilic Pervaporation Processes

Separating non-ideal mixtures by pervaporation (hence PV) is a competitive alternative to most traditional methods, such as distillation, which are based on the vapour–liquid equilibrium (VLE). It must be said, in many cases, accurate VLE data are already well known in the literature. They make the method of PV modelling a lot more complicated, and most of the viable models are (semi)empirical and focus on component flux (Ji) estimation. The pervaporation model of Mizsey and Valentinyi, which is based on Rautenbach’s works, is further improved in this work and tested rigorously by statistical means. Until now, this type of exponential modelling was only used for alcohol–water mixtures, but in this work, it was extended to an ethyl acetate–water binary mixture as well. Furthermore, a flowchart of modelling is presented for the first time in the case of an exponential pervaporation model. The results of laboratory-scale experiments were used as the basis of the study and least squares approximation was used to compare them to the different model’s estimations. According to our results, Valentinyi’s model (Model I) and the alternative model (Model III) appear to be the best methods for PV modelling, and there is no significant difference between the models, mainly in organophilic cases. In the case of the permeation component, Model I, which better follows the exponential function, is recommended. It is important to emphasize that our research confirms that the exponential type model seems to be universally feasible for most organic–water binary mixtures. Another novelty of the work is that after PDMS and PVA-based membranes, the accuracy of the semiempirical model for the description of water flux on a PEBA-based membrane was also proved, in the organophilic case. View Full-Text
Keywords: pervaporation modelling; model improvement; binary solution separation pervaporation modelling; model improvement; binary solution separation
►▼ Show Figures 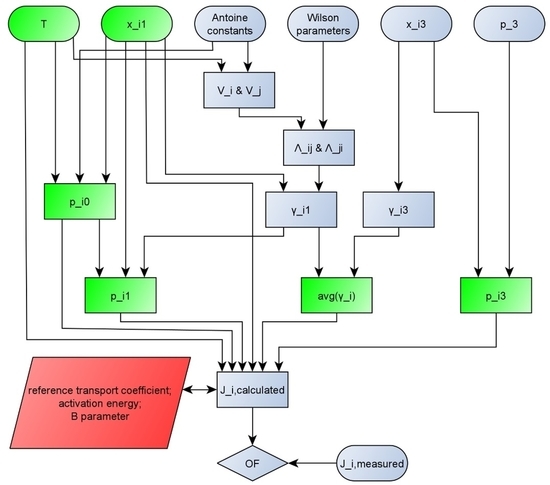