Hydrogen Production via Steam Reforming: A Critical Analysis of MR and RMM Technologies

A series of microfiltration membranes were fabricated by the extraction of polyisobutylene (PIB) from its immiscible blends with polymethylpentene (PMP). Three PIB with different molecular weight of 7.5 × 104 (Oppanol B15), 34 × 104 (Oppanol B50) and 110 × 104 (Oppanol B100) g/mol, respectively, were used to evaluate the effect of molecular weight on the porous structure and transport properties of resulting PMP-based membranes. To mimic the conditions of 3D printing, the flat-sheet membranes were fabricated by means of melting of mixtures of various PMP and PIB concentrations through the hot rolls at 240 C followed by a quick cooling. The rheology study of individual components and blends at 240 C revealed that PIB B50 possessed the most close flow curve to the pure PMP, and their blends demonstrated the lowest viscosity comparing to the compositions made of PIB with other molecular weights (B15 or B100). SEM images of the cross-section PMP membranes after PIB extraction (PMP/PIB = 55/45) showed that the use of PIB B50 allowed obtaining the sponge-like porous structure, whereas the slit-shaped pores were found in the case of PIB B15 and PIB B100. Additionally, PMP/B50 blends demonstrated the optimum combinations of mechanical properties (str = 9.1 MPa, E = 0.20 GPa), adhesion to steel (adh = 0.8 kPa) and retention performance (R240 nm = 99%, R38 nm = 39%). The resulting membranes were non- or low-permeable for water if the concentration of PIB B50 in the initial blends was 40 wt.% or lower. The optimal filtration performance was observed in the case of PMP/B50 blends with a ratio of 55/45 (Pwater = 1.9 kg/m2hbar, R240 nm = 99%, R38 nm = 39%) and 50/50 (Pwater = 1100 kg/m2hbar, R240 nm = 91%, R38 nm = 36%). View Full-Text
Keywords: polyisobutylene; polymethylpentene; microfiltration membrane; extraction polyisobutylene; polymethylpentene; microfiltration membrane; extraction
►▼ Show Figures 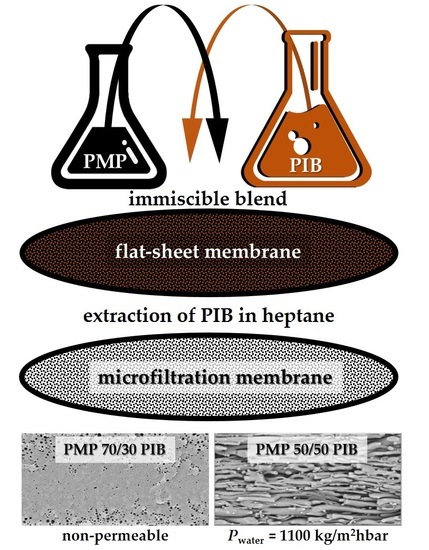