The Path to New Pediatric Vaccines against Pertussis

The antibodies with different effector functions evoked by Human Immunodeficiency Virus type 1 (HIV-1) transmitted from mother to child, and their role in the pathogenesis of infected children remain unresolved. So, too, the kinetics and breadth of these responses remain to be clearly defined, compared to those developing in adults. Here, we studied the kinetics of the autologous and heterologous neutralizing antibody (Nab) responses, in addition to antibody-dependent cellular cytotoxicity (ADCC), in HIV-1 infected children with different disease progression rates followed from close after birth and five years on. Autologous and heterologous neutralization were determined by Peripheral blood mononuclear cells (PBMC)- and TZMbl-based assays, and ADCC was assessed with the GranToxiLux assay. The reactivity to an immunodominant HIV-1 gp41 epitope, and childhood vaccine antigens, was assessed by ELISA. Newborns displayed antibodies directed towards the HIV-1 gp41 epitope. However, antibodies neutralizing the transmitted virus were undetectable. Nabs directed against the transmitted virus developed usually within 12 months of age in children with slow progression, but rarely in rapid progressors. Thereafter, autologous Nabs persisted throughout the follow-up of the slow progressors and induced a continuous emergence of escape variants. Heterologous cross-Nabs were detected within two years, but their subsequent increase in potency and breadth was mainly a trait of slow progressors. Analogously, titers of antibodies mediating ADCC to gp120 BaL pulsed target cells increased in slow progressors during follow-up. The kinetics of antibody responses to the immunodominant viral antigen and the vaccine antigens were sustained and independent of disease progression. Persistent autologous Nabs triggering viral escape and an increase in the breadth and potency of cross-Nabs are exclusive to HIV-1 infected slowly progressing children. View Full-Text
Keywords: HIV-1; neutralization; ADCC; children; humoral immunity; disease progression HIV-1; neutralization; ADCC; children; humoral immunity; disease progression
►▼ Show Figures 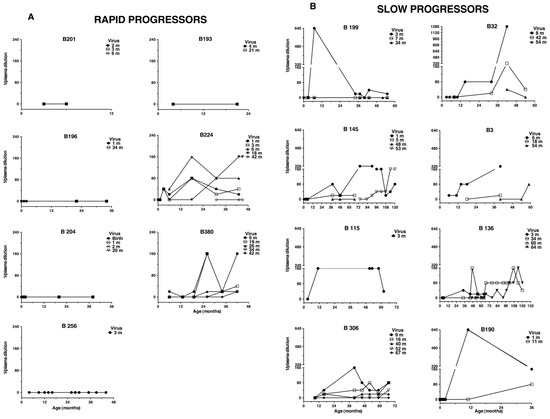