Herpesvirus of turkeys (HVT), used originally as a vaccine against Marek’s disease (MD), has recently been shown to be a highly effective viral vector for generation of recombinant vaccines that deliver protective antigens of other avian pathogens. Until the recent launch of commercial HVT-vectored dual insert vaccines, most of the HVT-vectored vaccines in the market carry a single foreign gene and are usually developed with slow and less efficient conventional recombination methods. There is immense value in developing multivalent HVT-vectored vaccines capable of inducing simultaneous protection against multiple avian pathogens, particularly to overcome the interference between individual recombinant HVT vaccines. Here we demonstrate the use of a previously developed CRISPR/Cas9 gene editing protocol for the insertion of ILTV gD-gI and the H9N2 AIV hemagglutinin expression cassettes into the distinct locations of the recombinant HVT-IBDV VP2 viral genome, to generate the triple insert HVT-VP2-gDgI-HA recombinant vaccine. The insertion, protein expression, and stability of each insert were then evaluated by PCR, immunostaining and Western blot analyses. The successful generation of the first triple insert recombinant HVT vaccine with the potential for the simultaneous protection against three major avian viral diseases in addition to MD is a major innovation in vaccination-based control of major poultry diseases. View Full-Text
Keywords: triple insert; HVT vectored vaccine; multivalent; CRISPR/Cas9 triple insert; HVT vectored vaccine; multivalent; CRISPR/Cas9
►▼ Show Figures 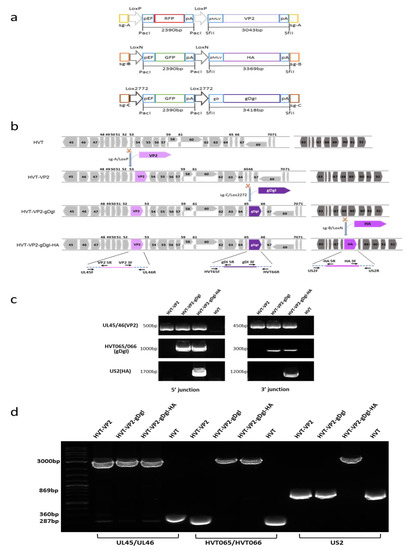