Pro-oxidant Actions of Carotenoids in Triggering Apoptosis of Cancer Cells: A Review of Emerging Evidence
Previous Article in Journal

Neurosporaxanthin Overproduction by Fusarium fujikuroi and Evaluation of Its Antioxidant Properties

Neurosporaxanthin (NX) is a carboxylic carotenoid produced by some filamentous fungi, including species of the genera Neurospora and Fusarium. NX biosynthetic genes and their regulation have been thoroughly investigated in Fusarium fujikuroi, an industrial fungus used for gibberellin production. In this species, carotenoid-overproducing mutants, affected in the regulatory gene carS, exhibit an upregulated expression of the NX pathway. Based on former data on a stimulatory effect of nitrogen starvation on carotenoid biosynthesis, we developed culture conditions with carS mutants allowing the production of deep-pigmented mycelia. With this method, we obtained samples with ca. 8 mg NX/g dry mass, in turn the highest concentration for this carotenoid described so far. NX-rich extracts obtained from these samples were used in parallel with carS-complemented NX-poor extracts obtained under the same conditions, to check the antioxidant properties of this carotenoid in in vitro assays. NX-rich extracts exhibited higher antioxidant capacity than NX-poor extracts, either when considering their quenching activity against [O2(1Δg)] in organic solvent (singlet oxygen absorption capacity (SOAC) assays) or their scavenging activity against different free radicals in aqueous solution and in liposomes. These results make NX a promising carotenoid as a possible feed or food additive, and encourage further studies on its chemical properties. View Full-Text
Keywords: carotenoids; xanthophylls; free radicals; oxidative stress; fungi; quenching; liposomes carotenoids; xanthophylls; free radicals; oxidative stress; fungi; quenching; liposomes
►▼ Show Figures 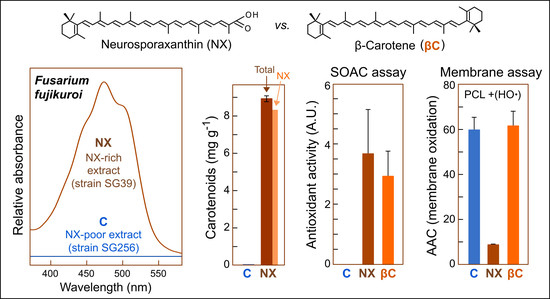