The aim of the present study was to determine the composition, antiradical and antimicrobial activity of fruits, leaves and roots of an underestimated species of barberry—Berberis iliensis—growing in Kazakhstan. Particular attention was paid to the determination of the composition of its extracts by high-performance liquid chromatography coupled with mass spectrometry (HPLC-ESI-Q-TOF-MS) analysis. As a result of the chromatographic and spectrometric study 33 secondary metabolites from the groups of phenolic acids and their esters, flavonoids, alkaloids and organic acids were identified and 15 of them—quantified. The isomers of caffeoyl-glucaric acid, caffeic acid derivatives, isoquercetin, berberine and jatrorrhizine were the most abundant components of the tested extracts. The antiradical activity tests were performed by 2,2-diphenyl-1-picrylhydrazyl (DPPH) and Folin-Ciocalteu assays on four types of extracts (water, ethanol, ethanol-water 7:3 v/v, ethanol-water 1:1 v/v) from the three organs of the plant. The highest antiradical potential (IC50 = 80 ± 6.36 µg/mL) and phenolic content (440 ± 17.1 mg gallic acid equivalents/L) was calculated for ethanol- water (1:1 v/v) extracts from the leaves and could be influenced by the abundant presence of simple phenolic acids, flavonoids and glucaric acid esters. Among reference microorganisms, M. luteus, S. epidermidis, some S. aureus and B. cereus belonging to Gram-positive bacteria and yeasts from Candida species were the most sensitive to roots extract that was found the most active among the studied samples. The results of the study classify Berberis iliensis as a strong antioxidant agent and as a plant with an antimicrobial potential. View Full-Text
Keywords: berberidaceae; barberry; HPLC-Q-TOF-MS; antimicrobial activity; antioxidant potential; natural products; isoquinoline alkaloids; polyphenols; Kazakh flora berberidaceae; barberry; HPLC-Q-TOF-MS; antimicrobial activity; antioxidant potential; natural products; isoquinoline alkaloids; polyphenols; Kazakh flora
►▼ Show Figures 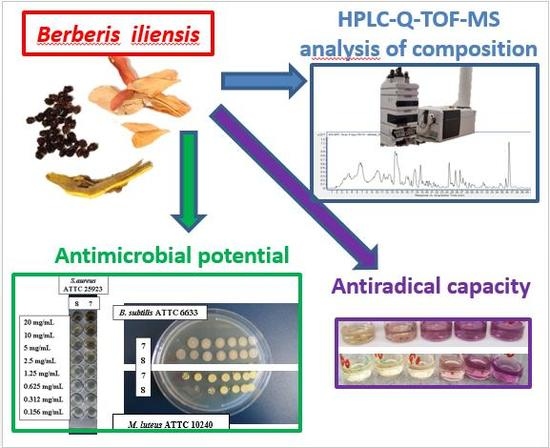