Golden root (Rhodiola rosea L., Crassulaceae) is a famous medical plant with a one-sided history of scientific interest in the roots and rhizomes as sources of bioactive compounds, unlike the herb, which has not been studied extensively. To address this deficiency, we used high-performance liquid chromatography with diode array and electrospray triple quadrupole mass detection for comparative qualitative and quantitative analysis of the metabolic profiles of Rhodiola rosea organs before and after gastrointestinal digestion in simulated conditions together with various biochemical assays to determine antioxidant properties of the extracts and selected compounds. R. rosea organs showed 146 compounds, including galloyl O-glucosides, catechins, procyanidins, simple phenolics, phenethyl alcohol derivatives, (hydroxy)cinnamates, hydroxynitrile glucosides, monoterpene O-glucosides, and flavonol O-glycosides, most of them for the first time in the species. The organ-specific distribution of compounds found for catechins, procyanidins, and cinnamyl alcohols and glucosides was typical for underground organs and flavonoids and galloylated glucoses concentrated in the herb. Extracts from rhizomes, leaves and flowers showed high phenolic content and were effective scavengers of free radicals (2,2-diphenyl-1-picrylhydrazyl (DPPH•), 2,2′-azino-bis(3-ethylbenzothiazoline-6-sulfonic acid) (ABTS•+), O2•−, •OH) and protected β-carotene in a bleaching assay. Digestion in the gastric and intestine phase influenced the composition of R. rosea extracts negatively, affecting the content of catechins, procyanidins, and galloyl glucoses, and therefore, the antioxidativity level. After gut microbiota treatment, the antioxidant capacity of rhizome extract was lower than leaves and flowers due to the aglycone composition found in the colonic phase of digestion. Our study demonstrated that the herb of R. rosea is a rich source of metabolites with high antioxidant properties and could be a valuable plant for new bioactive products. View Full-Text
Keywords: Rhodiola rosea; phenolic compounds; antioxidant activity; gastrointestinal digestion; gut microbiota; herbal products Rhodiola rosea; phenolic compounds; antioxidant activity; gastrointestinal digestion; gut microbiota; herbal products
►▼ Show Figures 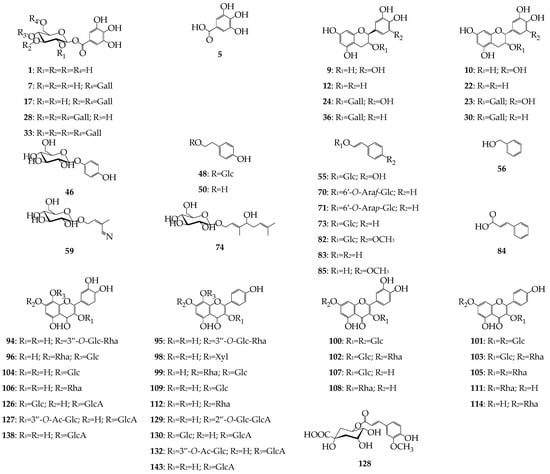