Post-Treatment with Erinacine A, a Derived Diterpenoid of H. erinaceus, Attenuates Neurotoxicity in MPTP Model of Parkinson’s Disease
Next Article in Special Issue

Have We Looked in the Wrong Direction for More Than 100 Years? Delayed Onset Muscle Soreness Is, in Fact, Neural Microdamage Rather Than Muscle Damage
Previous Article in Journal

:
Regular exercise is beneficial to maintain a healthy lifestyle, but the beneficial effects are lost in the case of acute exhaustive exercise; this causes significant inflammation, oxidative stress along with organ damage. Recently, sulforaphane (SFN), an indirect antioxidant, has drawn special attention for its potential protective effect against inflammation and oxidative stress. However, no studies have been performed regarding acute exhaustive exercise-induced organ damage in association with SFN administration. Therefore, the aim of this study was to investigate the effects of SFN on acute exhaustive exercise-induced organ damage and the mechanisms involved. To perform the study, we divided mice into four groups: Control, SFN, exercise, and SFN plus exercise. The SFN group was administered orally (50 mg/kg body wt) 2 h before the running test. We measured plasma levels of alanine aminotransferase (ALT), aspartate aminotransferase (AST), and lactate dehydrogenase (LDH), and acute exhaustive exercise significantly increased these biomarkers. In addition, the mRNA expression of pro-inflammatory cytokines, IL-6, IL-1β, and TNF-α, were significantly increased in the liver of exercise group. However, the SFN plus exercise group showed a significant reduction in the expression of cytokines and blood biomarkers of tissue damage or cell death. Furthermore, we measured mRNA expression of Nrf2, heme oxygenase (HO)-1, and antioxidant defense enzymes expression, i.e., superoxide dismutase (SOD1), catalase (CAT), and glutathione peroxidase (GPx1) in the liver. The expression of all these biomarkers was significantly upregulated in the SFN plus exercise group. Collectively, SFN may protect the liver from exhaustive exercise-induced inflammation via inducing antioxidant defense response through the activation of Nrf2/HO-1 signal transduction pathway.
Keywords:
sulforaphane; inflammation; antioxidant; exercise; Nrf2; oxidative stress; cytokines; antioxidant enzymes

Thirty-six male C57BL/6 mice (seven weeks old) were purchased from the Takasugi Experimental Animals Supply (Kasukabe, Japan) and three to four mice were caged together (27 × 17 × 13 cm) under a temperature-controlled environment for two weeks with a 12:12 h light-dark cycle (08:00 to 20:00 light period and 20:00 to 08:00 was dark period). All the mice had free access to a standard chow diet (MF Oriental Yeast, Tokyo, Japan) and water until the experiment started. Mice were divided into four groups: Two for sedentary; control (CON, n = 9), SFN (n = 9), and two for exercise (Ex, n = 9) and SFN + Ex (n = 9). The experimental procedures followed the Guiding Principles for the Care and Use of Animals in the Academic Research Ethical Review Committee of Waseda University and were approved (2019-A109).

One week before the exhaustive running exercise, all mice (including sedentary) were accustomed to a motorized treadmill (Natsume, Kyoto, Japan) running at 15 m/min for 10 min (0% incline). SFN (LKT Laboratories, St. Paul, MN, USA, product code S8044) was administered orally (50 mg/kg body wt), solubilized in distilled water with a volume of 150 µL on the day of the experiment at around 9 am. The uphill treadmill running (7% incline) was started 2 h after feeding. The dose and waiting hours were selected based on the previous literature [37,38]. The Ex and SFN + Ex groups of mice were subjected to run at 15 m/min for 10 min, followed by 20 m/min for 10 min, and finally, 24 m/min continued until exhaustion (Figure 1). The state of exhaustion was defined as the inability to continue running despite tapping on the back of the mouse several times or repositioning by hand on the treadmill [39,40].

The sedentary groups were sacrificed 2 h after oral ingestion and the exercise group was sacrificed immediately after exhaustion under light anesthesia with the inhalant isoflurane (Abbott, Tokyo, Japan). Blood samples were collected rapidly from the abdominal aorta using heparin under inhalant mild anesthesia, and centrifuged at 1500× g for 15 min at 4 °C to collect the plasma. The liver sample was immediately collected and stored in liquid nitrogen, and all the other samples were stored at −80 °C.

Total RNA was extracted from the liver using the TRizol (Thermo Fisher, Rockford, IL, USA) extraction reagent, according to the maker’s protocol. The NanoDrop system (NanoDrop Technologies, Wilmington, DE, USA) was used to confirm the concentration and purity of extracted RNA by the ratio of A260/280. Total RNA was reverse transcribed to cDNA using the High-Capacity cDNA Reverse Transcription kit (Applied Biosystems, Foster City, CA, USA) according to the provided instructions. PCR was performed using the Fast 7500 real-time PCR system (Applied Biosystems, Foster City, CA, USA) and Fast SYBR Green PCR Master Mix (Applied Biosystems, Foster City, CA, USA). The thermal profile for all genes consisted of one denaturing cycle at 95 °C for 10 min, 40 cycles consisting of denaturing at 95 °C for 3 s and annealing and elongation at 60 °C for 15 min. 18S mRNA was used as the housekeeping gene. All data were normalized using the ΔΔCT method and stated as a fold change relative to the values of the control group. Specific sequences of primers used for gene amplification are given in Table 1.

3.1. Effect of SFN on Plasma Levels of Exercise-Induced AST, ALT, and LDH

Figure 2A–C presents plasma AST, ALT, and LDH levels among the sedentary and exercise groups in the absence or presence of SFN. AST or glutamic oxaloacetic transaminase (GOT), and ALT or glutamic pyruvic transaminase (GPT) are two important markers for hepatocellular damage. Exercise with or without SFN treatment significantly increased AST, ALT, and LDH levels in the plasma, compared with the control and/or sedentary groups (p < 0.001). However, there was a significantly less induction in all three biomarkers in the Ex + SFN group compared to the exercise group alone (p < 0.05). LDH is an important marker, that increases during prolonged exercise [39,41]. In addition to that, measuring AST and ALT, and assessing LDH gives a clear diagnosis of liver injury.

SOD1, CAT, and GPx1 are the prime endogenous defense enzymes in the redox balance system against ROS. As shown in Figure 4A–C, the mRNA expression of SOD1, CAT, and GPx1 enzymes was significantly upregulated by 2-, 1.5-, and 2.5-fold with exercise in the SFN group. A slightly reduced expression was observed only in the exercise group for CAT and GPx1, but not for SOD1. However, no significant difference was observed in the level of those enzymes between the exercise and control groups.

Nrf2 is the pivotal transcription factor for regulating the cellular antioxidant system. In Figure 5A, Nrf2 mRNA expression was increased by 1.5-fold with SFN in the exercise group, which differs significantly as compared to the exercise and/or sedentary SFN groups. Interestingly, as shown in Figure 5B, phase 2 enzyme HO-1 gene expression was increased by 12.6-fold in the Ex + SFN group, which is around a three-times larger expression than the nonsupplement exercise group. In addition, the interaction effect of both expression levels was significant (p < 0.05).

Natural antioxidants have unique scavenging properties against free radicals. Much research has been carried out, regarding antioxidant supplementation to modulate exercise-induced stress and inflammation. Despite the somewhat paradoxical effects, exercise is important for our longevity and for living a sound life. Here, we presented data on the protective role of SFN on acute exercise-induced liver damage. Collectively, we summarized that SFN is not directly involved in the ROS reduction process, but it induces a cellular defense system through the induction of antioxidant enzymes via the upregulation of the Nrf2/HO-1 signal transduction pathway, thereby reducing oxidative stress and inflammation.

This research was supported by the Waseda University Grant for Special Research Projects 2019Q-056. This study was also made possible by a Grant-in-Aid for MEXT-Supported Program for the Strategic Research Foundation at Private Universities 2015–2019 from the Ministry of Education, Culture, Sports, Science, and Technology of Japan (S1511017).

The authors thank all members of the laboratory for help and discussion. They also thank Takaki Tominaga, Graduate School of Sport Sciences, Waseda University for his skilled technical support, and Asghar Abbasi, Department of Medicine, Harbor-UCLA Medical Center, CA, USA and Review Editor of Frontiers in Physiology, for English editing.

The authors declare no conflict of interest. The funders had no role in study design, data collection and analysis, decision to publish, or preparation of the manuscript. 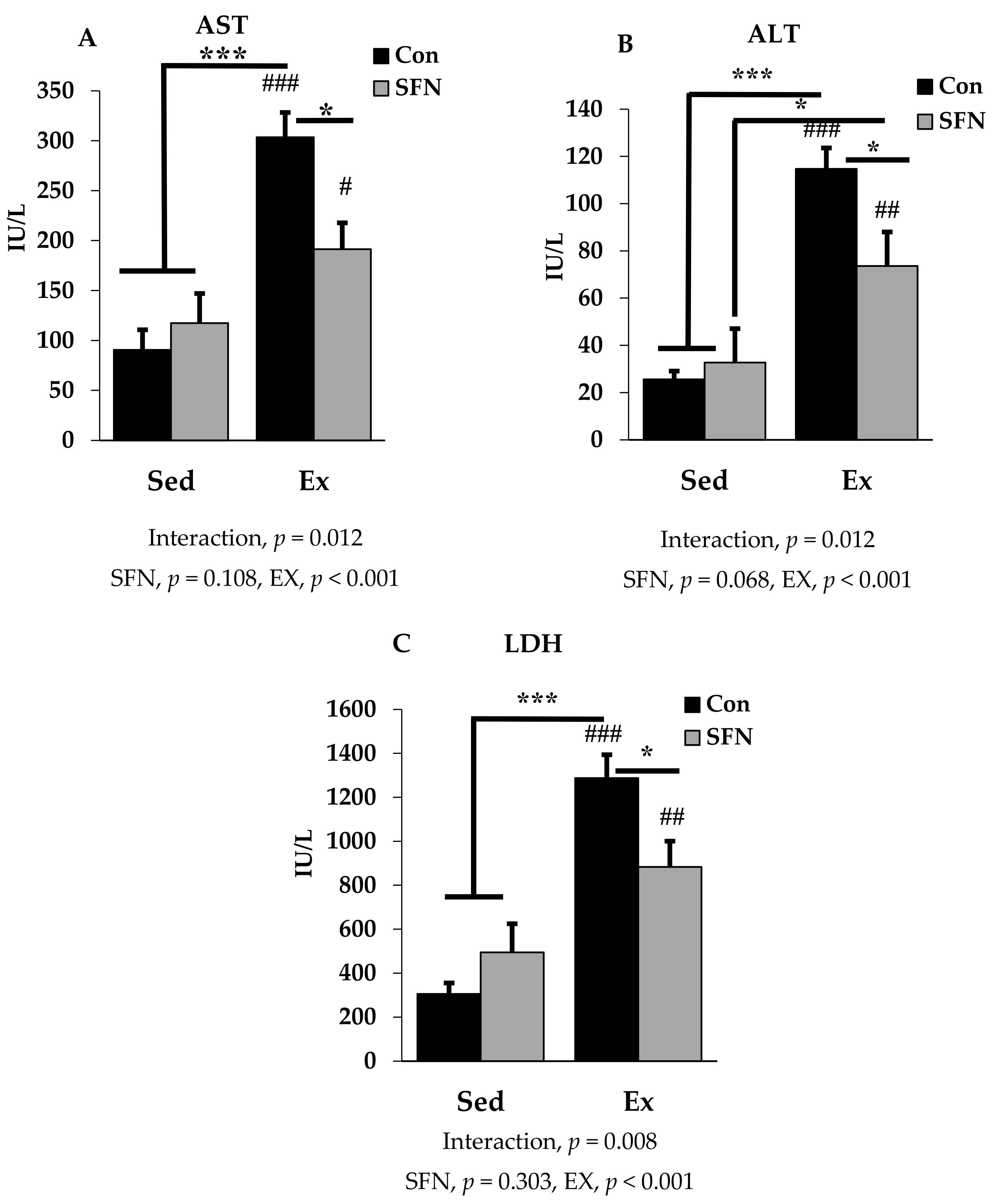