Green tea is a familiar beverage with high amounts of bioactive polyphenols, such as catechins (flavan-3-ols), flavones, and flavonols [1]. Green tea generally contains approximately 30% phenolic compounds, of which catechins and flavonols account for approximately 15% and 0.4% of the dry weight (DW), respectively [2,3]. Flavonols and flavones in green tea include myricetin, quercetin, apigenin, and kaempferol [3]. These green tea flavonols and flavones are mainly in the form of glycosides, and their content and compositions vary among tea cultivars [4,5].
Flavonols exhibit anticancer activity by inhibiting the proliferation and angiogenesis of cancer cells and exerting pro-apoptotic effects [6]. These anticancer effects have been demonstrated in several cancer cell lines, in addition to antioxidative and antihyperlipidemic effects [6,7,8]. The consumption of green tea has been reported to increase the plasma antioxidant capacity [9]. The effects of flavonol supplementation on cardiometabolic risk factors revealed significant reductions in triacylglycerol, total cholesterol, low-density lipoprotein, and fasting plasma glucose levels, as well as blood pressure, and a significant increase in high-density lipoprotein [10]. The antioxidative effects of flavonol glycosides are weaker than those of flavonol aglycones [11]. Several studies have suggested that green tea promotes physiological functions, including body weight regulation, ultraviolet protection, bone mineral density maintenance, and antibacterial, antihypertensive, antifibrotic, and neuroprotective activities [12,13].
Many health problems are strongly related to the inflammation status in humans [14]. The effects of green tea and its catechins to relieve inflammation in cells have been investigated [15,16]. Approximately 65% of adults exhibit downregulated intestinal lactase production [17]. Lactase or lactase-phlorizin hydrolase exists on the brush border membrane of enterocytes. Lactase catalyzes the hydrolysis of a variety of β-glucosides, including flavonoid glucosides [18]. Glycosylated flavonols and flavones have different sugar bonds and compositions depending on the plant source and are therefore subjected to different digestion processes in the body.
Studies on the diverse health-promoting effects of green tea have typically focused on catechins [12,13]. Unlike catechins, green tea flavonols have received little attention with respect to their usage and functionality. In this study, we investigated the antioxidative, anti-inflammatory, and anticancer effects of the fractions rich in flavonol glycoside (FLG) and flavonol aglycone (FLA) isolated from enzymatically treated green tea extract (GTE).

2.2. Preparation of the Purified FLG and FLA from GTE

Fresh green tea leaves were harvested from May to June in 2017 (Osulloc Farm Corp., Jeju-do, Korea), and then dried. To prepare GTEs, dried green tea leaves were soaked in a 10-fold solution of 70% (v/v) aqueous ethanol at 60 °C with stirring for 3 h, the ethanol in the extract was removed using an evaporator (Hei-VAP; Heidolph Instruments, Schwabach, Germany), and then the extract was filtered using a 20 μm filter (Pall Corp., Port Washington, NY, USA) and solidified using a KL-8 spray dryer (Seogang Engineering, Cheonan, Korea).
To obtain purified FLG, GTE aqueous solution (1% (w/v)) of pH 5.0 was reacted with 1% (v/v) tannase (500 units/mL) in a thermoshaker (Eppendorf AG, Hamburg, Germany) for 14 h at 40 °C. The enzymatic reaction was ceased by heating at 90 °C for 20 min. To obtain purified FLA, similar conditions were applied using cellulase instead of tannase. These enzyme-treated GTEs were then freeze dried. The green tea extraction process with enzymatic treatment to obtain purified flavonol glycoside- and aglycone-rich fractions is shown in Figure 1.
Preparative HPLC was used to remove sugars, gallic acid, and catechins and to obtain FLG and FLA from the enzyme-treated GTEs [19]. In detail, 5 g of freeze-dried enzyme-treated GTEs were solubilized in 50 mL of 60% aqueous methanol, and then passed through a 0.45 µm polyvinylidene fluoride syringe filter (Pall Corp.) after 10 min of sonication. The filtered enzyme-treated GTEs were loaded into a preparative liquid chromatography system (ÄKTA Purifier 10; GE Healthcare, Stockholm, Sweden) coupled with a photodiode array detector at wavelengths of 254 and 365 nm. Fractionation was conducted using an octadecyl-silica (ODS) AQ-HG column (column volume (CV) = 78.5 mL, 120 Å, 10 μm, 20 × 250 mm; YMC, Kyoto, Japan). Gradient elution was performed with water (solvent A) and acetonitrile (solvent B) as follows: 0.45 CV, 84% A/16% B; 1.80 CV, 84–80% A/16–20% B; 0.45 CV, 80% A/20% B; 0.45 CV, 80–78% A/20–22% B; 0.45 CV 78–20% A/22–80% B; 0.45 CV, 20–0% A/80–100% B; 0.45 CV, 0–100% A/100–0% B; 0.45 CV, 100% A/0% B. The flow rate and injection volume were 10 mL/min and 5 mL, respectively. Fractions from each cycle were divided into two and collected in separate bottles via repeated cycles of injections. After confirming the absence of catechins in the second fraction in each cycle, the fractions were combined. The fractions were condensed using evaporators (Hei-VAP; Heidolph Instruments), dehydrated using a freeze dryer (FreeZone; Labconco Corp., Kansas City, MO, USA), and then maintained at −20 °C prior to analyses.

2.3. Total Phenolic and Flavonoid Content in FLG and FLA

The total phenolic content in FLG and FLA was determined using a colorimetric method with Folin–Ciocalteu’s phenol reagent [20,21]. First, 10 mg of catechin, gallic acid, FLG, or FLA were dissolved in 1 mL of DMSO, and then diluted 10 times with deionized water. Then, 200 μL each of the resulting mixture were mixed with deionized water (2.6 mL). Folin–Ciocalteu’s phenol reagent (200 μL) was added to each mixture at 0 min. Na2CO3 solution (7% (w/v); 2 mL) was added at 6 min. At 90 min, the absorbance was measured at 750 nm using a spectrophotometer (SPECTRONIC 200; Thermo Fisher Scientific Inc. (Waltham, MA, USA)). The total phenolic content is presented as “mg gallic acid equivalents (GAE)/g DW” of FLG or FLA.
The total flavonoid content was measured using the method reported by Kim et al. [21]. Briefly, a 500 μL portion of FLG or FLA was mixed with deionized water (3.2 mL), and then NaNO2 (5% (w/v); 150 μL) was added. AlCl3 (10% (w/v); 150 μL) was added at 5 min and NaOH (1 M; 1 mL) was added at 6 min. The absorbance was measured immediately at 510 nm using a spectrophotometer (SPECTRONIC 200). The total flavonoid content is expressed as “mg catechin equivalents (CE)/g DW” of FLG or FLA.

2.5. Measurements of Antioxidant Capacities of FLG and FLA

The antioxidant capacities of FLG and FLA were determined following the methods described by Kim et al. [21]. The radical solution of ABTS (980 μL) with an absorbance of 0.650 ± 0.020 at 734 nm was reacted with 20 μL of FLG or FLA at 37 °C for 10 min. The absorbance was measured at 734 nm using a spectrophotometer (SPECTRONIC 200). Antioxidant capacities are presented as “mg vitamin C equivalents (VCE)/g DW” of FLG or FLA.

Antioxidant capacity was also evaluated following the method described by Kim et al. [21], with modifications. The absorbance of DPPH radicals was set to 0.650 ± 0.020 at 517 nm. The reaction between DPPH radicals and FLG or FLA was allowed to proceed at ambient temperature for 30 min. At 30 min, the absorbance of the resulting solution was measured at 517 nm using a spectrophotometer (SPECTRONIC 200). Antioxidant capacities are presented as “mg VCE/g DW” of FLG or FLA.

2.6. Measurements of Intracellular Oxidative Stress of FLG and FLA

Intracellular oxidative stress levels were evaluated using DCFH-DA following previously described methods [25]. Briefly, PC-12 cells (2 × 104 cells/well) were incubated for 3 h in a humidified incubator with 5% CO2 at 37 °C. PC-12 cells with 50 μM DCFH-DA or 5 μM DHE in Hanks’ balanced salt solution (HBSS) were incubated for 30 min, and then treated with 100 μM H2O2 in HBSS for 1 h. Fluorescence was gauged using a microplate reader (Infinite M200; Tecan Austria GmbH, Grödig, Austria) at an excitation wavelength of 485 nm and emission wavelength of 530 nm. The intracellular oxidative stress levels are presented as the percentage (%) decrease in fluorescence intensity relative to the control (100%).

2.7. Anti-Inflammatory Effects of FLG and FLA

2.8. Anticancer Effects of FLG and FLA

DLD-1 cells were cultured in DMEM supplemented with 10% FBS and 0.1% penicillin/streptomycin solution in a humidified incubator at 37 °C with 5% CO2. E0771 cells were grown in RPMI-1640 supplemented with 10% FBS and 0.1% penicillin/streptomycin and were cultured under the same temperature and humidity conditions. Cell viability was confirmed based on the formation of a purple formazan metabolite from MTT, which was solubilized with DMSO. DLD-1 and E0771 cells in 96-well plates (5 × 103 cells/well) were incubated with samples for 24 h with or without paclitaxel (10 nM), and then MTT (1 mg/mL) was added and the cells were incubated for 2 h. Purple formazan crystals were dissolved in DMSO and absorbance was measured at a wavelength of 570 nm using a microplate reader (Infinite M200 Pro; Tecan, Männedorf, Switzerland). The results are represented as the percent absorbance relative to that of the control cells.

3.1. Phenolic Compositions of FLG and FLA

3.2. Antioxidant Capacities of FLG and FLA

The antioxidant capacities of GTE were 1637.06 ± 16.67 and 1335.27 ± 36.35 mg VCE/g DW of GTE, as measured using the ABTS and DPPH assays, respectively (Table 3). The antioxidant capacities of FLA and FLG measured using ABTS radicals decreased to approximately 53.2–83.1% compared with those of GTE, whereas FLA and FLG had approximately 35.2% and 61.2% lower DPPH radical scavenging antioxidant capacity than that of GTE, respectively (Table 3). The results of the ABTS and DPPH assays for tannase-treated GTE (crude extract with no purification) were higher (i.e., 2011 and 1317 mg VCE/g DW, respectively) than those for GTE due to extra gallic acid (data not shown).

3.3. Effects of FLG and FLA on Intracellular Oxidative Stress

3.4. Anti-Inflammatory Effects of FLG and FLA

3.5. Anticancer Effects of FLG and FLA

Using HPLC-MS analysis, we determined that FLA contained higher concentrations of flavonoid aglycones than that of FLG. In this study, 16 derivatives of apigenin, kaempferol, myricetin, and quercetin were identified in FLG and 13 in FLA. We concluded that FLG and FLA without catechins from green tea have potent antioxidant capacities and reduce oxidative stress in PC-12 cells. FLG and FLA significantly reduced the mRNA expression of inflammation-related genes in murine RAW 264.7 macrophages. Additionally, the growth of DLD-1 and E0771 cancer cells was synergistically inhibited by co-treatment with FLG or FLA and paclitaxel. Taken together, these findings indicate that FLG and FLA from green tea have beneficial effects on health, partly due to their antioxidant components and anti-inflammatory and anticancer activities. Further studies are needed to investigate the effects of FLG and FLA on inflammation and cancer using in vivo animal models.

This research was supported by the Agricultural Biotechnology Development Program (Project No. PJ012512042018), Ministry of Agriculture, Food and Rural Affairs, Korea. 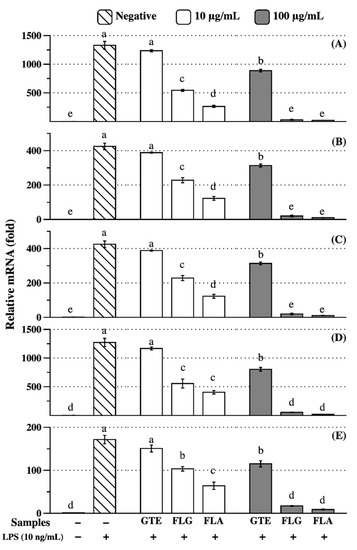 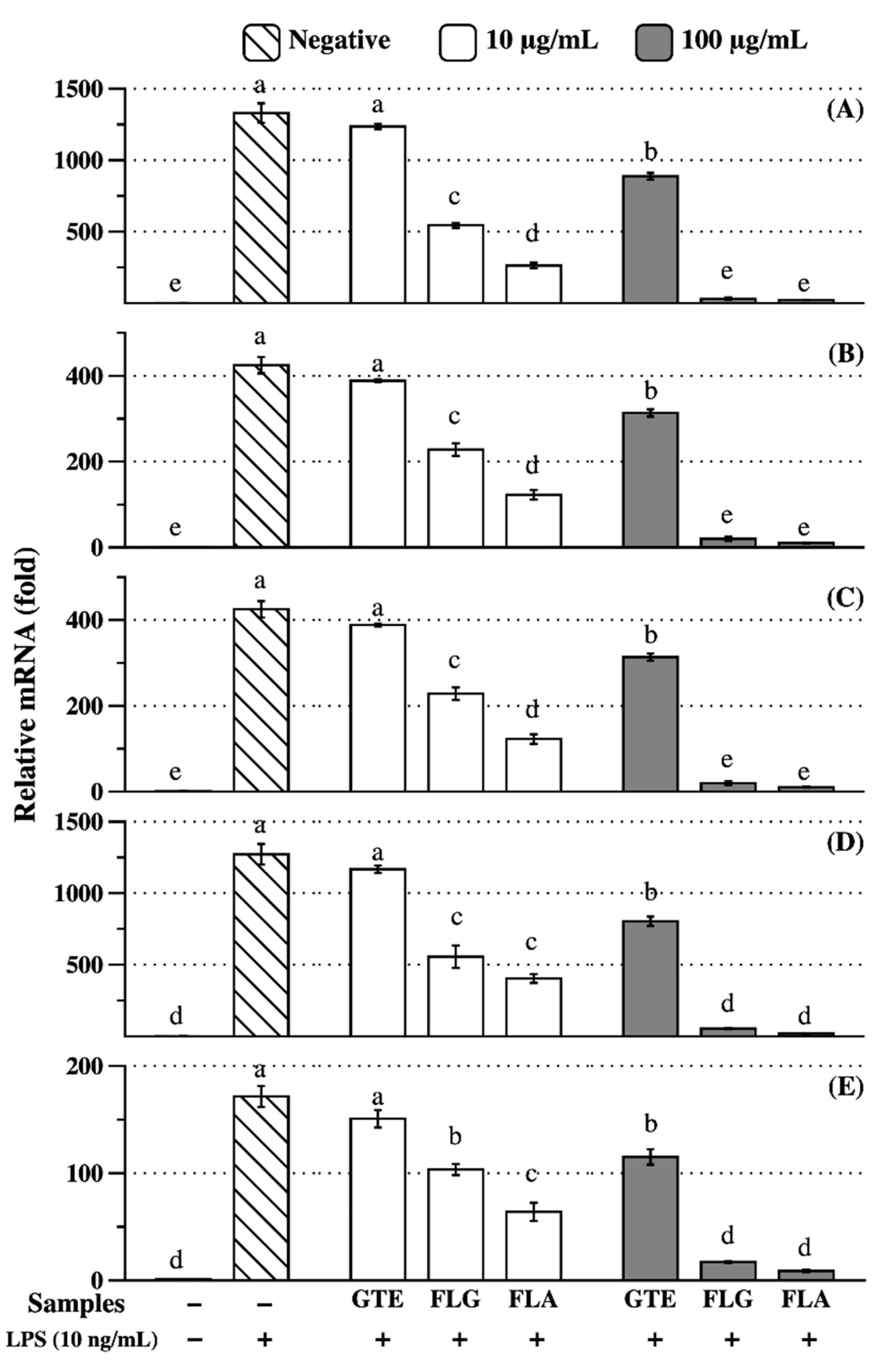 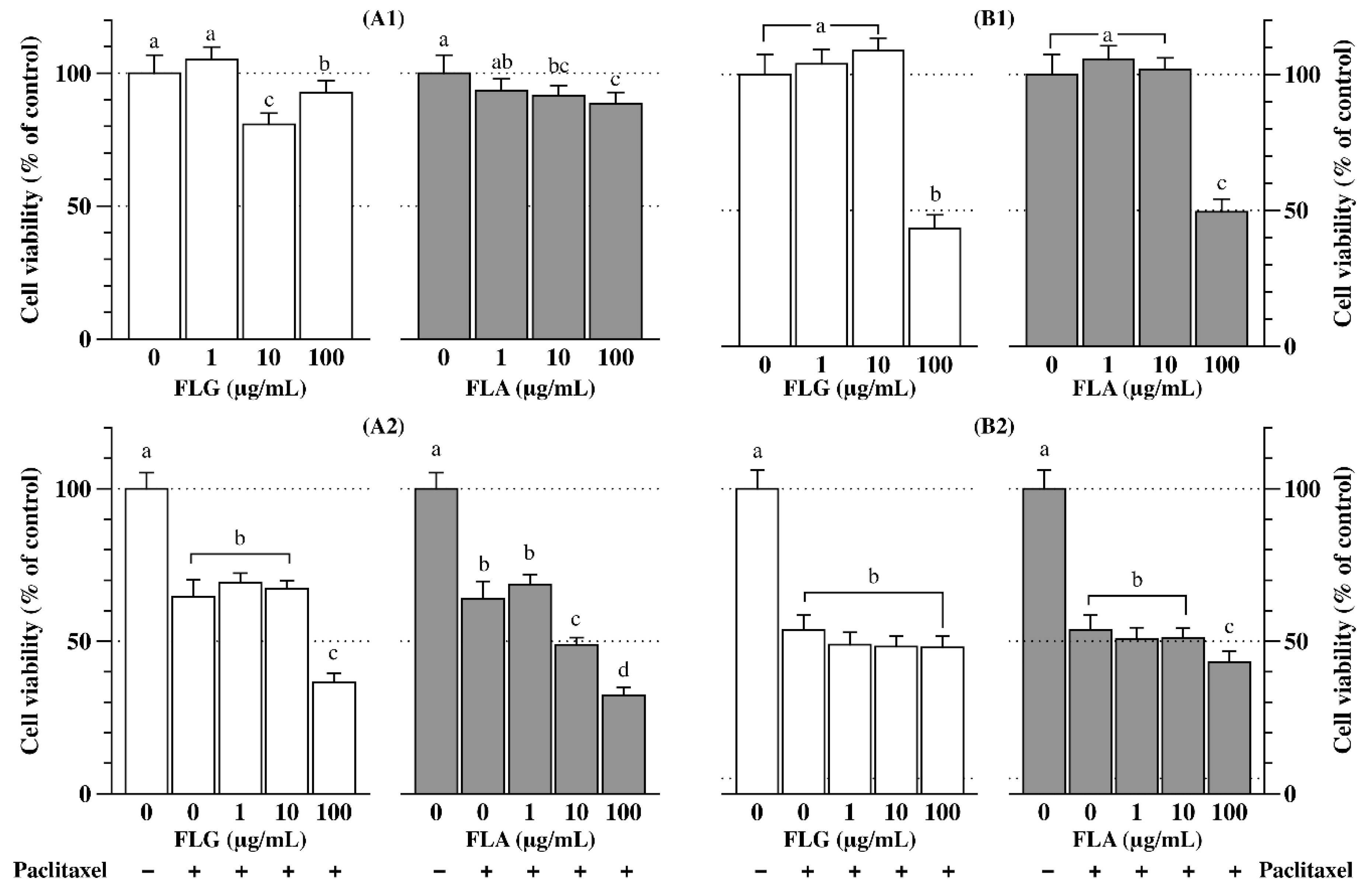