Associations between Dietary Polyphenols and Type 2 Diabetes in a Cross-Sectional Analysis of the PREDIMED-Plus Trial: Role of Body Mass Index and Sex

Overweight and obesity are important risk factors for type 2 diabetes (T2D). Moving towards healthier diets, namely, diets rich in bioactive compounds, could decrease the odds of suffering T2D. However, those individuals with high body mass index (BMI) may have altered absorption or metabolism of some nutrients and dietary components, including polyphenols. Therefore, we aimed to assess whether high intakes of some classes of polyphenols are associated with T2D in a population with metabolic syndrome and how these associations depend on BMI and sex. This baseline cross-sectional analysis includes 6633 participants from the PREDIMED-Plus trial. Polyphenol intakes were calculated from food frequency questionnaires (FFQ). Cox regression models with constant time at risk and robust variance estimators were used to estimate the prevalence ratios (PRs) for polyphenol intake and T2D prevalence using the lowest quartile as the reference group. Analyses were stratified by sex and BMI groups (overweight and obese) to evaluate potential effect modification. Catechins, proanthocyanidins, hydroxybenzoic acids, and lignans were inversely associated with T2D. Hydroxycinnamic acids were directly related in men. These associations were different depending on sex and BMI, that is, women and overweight obtained stronger inverse associations.
Keywords: diet; obesity; flavonoids; catechins; proanthocyanidins; hydroxybenzoic acids; hydroxycinnamic acids; lignans; phenolic acids diet; obesity; flavonoids; catechins; proanthocyanidins; hydroxybenzoic acids; hydroxycinnamic acids; lignans; phenolic acids

The number of people with diabetes has been increasing over the past few decades and the estimations for the near future are not encouraging. Currently, 8.5% of adults have diabetes worldwide, type 2 diabetes (T2D) being the most prevalent type. People with T2D have increased odds of premature death and are more likely to have myocardial infarction or angina, stroke, kidney failure, peripheral artery disease, vision loss, and neuropathy. Therefore, T2D may be considered a global public health problem with vast economic consequences [1].
Unlike type 1 diabetes, T2D can be prevented through different approaches, namely, exercising regularly, avoiding smoking, keeping weight under control, and adhering to a healthy diet. There is compelling evidence from prospective observational studies and clinical trials that individual nutrients, foods, and dietary patterns are crucial in the prevention and management of T2D. It is well known that plant-based diets including whole grains, fruits, vegetables, legumes, and nuts as well as moderate alcohol consumption have been associated with lowering the risk of T2D, whereas diets rich in refined grains, red or processed meats, and sugar-sweetened beverages increase the risk [2]. Plant foods are usually rich in polyphenols, a large and heterogeneous group of bioactive compounds that constitute the first source of antioxidants in the diet. Polyphenols are usually classified according to their structure into two main groups—flavonoids and non-flavonoids. The flavonoid group, with C6–C3–C6 structured compounds, includes flavones, flavonols, theaflavins, catechins, proanthocyanidins (polymeric forms), flavanones, anthocyanidins, and isoflavones. Phenolic acids, lignans, and stilbenes belong to the non-flavonoid group. High polyphenol intake has been associated with a reduced incidence of T2D in epidemiological studies [3], and better metabolic control in those participants with T2D. Some of the mechanisms by which dietary polyphenols and their metabolites exert their effects have been elucidated but others are still unknown [4].
Overweight and obese individuals are at higher risk of T2D than lean ones, therefore it seems that they would particularly benefit from polyphenol intake. However, some literature suggest that those with higher body mass index (BMI) may have altered absorption or metabolism of some nutrients and dietary components, including polyphenols [5,6].
Due to the heterogeneity of polyphenols, and to understand their antidiabetic properties, it is necessary to study them considering the different groups separately, because they have different absorption and metabolism [7]. Epidemiological and clinical studies have usually been focused on some polyphenolic groups, but comprehensive studies are still scarce. Moreover, to our knowledge, no previous studies have examined the associations between the intake of all polyphenolic groups and subgroups and the risk of T2D stratifying by sex and BMI. Therefore, our aim was to examine the hypothesis that higher intakes of some classes of polyphenols are associated with T2D in a population with metabolic syndrome and these associations depend on sex and BMI.

At baseline, participants filled out a validated 143-item semi-quantitative food frequency questionnaire (FFQ) [10] under the supervision of registered dietitians, from which total energy and nutrient intake were calculated on the basis of Spanish food composition tables [11,12]. Additionally, they were asked to fill out a 17-point score questionnaire measuring adherence to an energy-restricted traditional Mediterranean diet (MedDiet), an updated version of the 14-point score questionnaire used in the PREDIMED trial [13].
The 143-item FFQ was also used to calculate polyphenol intake together with the Phenol-Explorer database (www.phenol-explorer.eu). The validity of this particular FFQ to assess total polyphenol intake was tested in both clinical and cross-sectional studies [14,15]. Individual polyphenol intakes were obtained by multiplying the content of each polyphenol in each food item with polyphenols (mg/g) by the daily consumption of this food item (g/day) and then summing the product across all food items. Then, polyphenol subclasses were adjusted for total energy intake using the residual method [9]. After stratification by sex and BMI groups, namely, overweight (BMI < 30 kg/m2) and obese (BMI ≥ 30 kg/m2), polyphenol intakes were divided in quartiles.

For the present analysis, the main endpoint was the prevalence of T2D, defined as previous clinical diagnosis of T2D, or glycated hemoglobin (HbA1c) ≥ 6.5%, or use of antidiabetic medication at baseline, or fasting plasma glucose > 126 mg/dl in both the screening visit and baseline visit.

Participants filled out a general questionnaire to provide data on lifestyle habits, education, concurrent diseases, and medication use. Physical activity was measured by a short Minnesota Leisure Time Physical Activity Questionnaire validated for the Spanish population [16]. Height and weight were measured by trained staff. BMI was calculated as weight in kilograms by the square of height in meters. After an overnight fasting, blood samples were collected. Serum glucose, triglyceride, as well as total and high-density lipoprotein (HDL) cholesterol levels were measured by routine laboratory tests using standard enzymatic methods.

Baseline characteristics according to quartiles of total polyphenol intake are presented as means (±SD) for quantitative variables and frequencies for categorical variables. One-factor ANOVA tests were used to assess the differences between quartiles of polyphenol consumption and chi-squared tests for categorical variables.
We used Cox regression models with constant time at risk and robust variance estimators to obtain the prevalence ratios (PRs) for polyphenol intake and T2D prevalence using the lowest quartile as the reference group [17]. We ran stratified analyses for sex and BMI groups (overweight and obese) to evaluate potential effect modification.
In multivariate models, we adjusted for age (continuous), smoking status (never, current, or former), physical activity (quintiles), and education (primary education, secondary education, academic/graduate) in model 1. In the fully adjusted model, we additionally adjusted for energy intake (continuous) as well as consumption of refined cereals and animal products (derived from the 17-point questionnaire) and of distilled beverages and liquors, sugar, soft drinks, cookies, and pastries (in g/day derived from the FFQ). All models were stratified by the recruiting center.
Interaction effect was calculated comparing the models, with and without the interaction term, with likelihood-ratio tests after estimation. We tested for linear trends across categories of polyphenol intake by assigning each participant the median value for each category and modelling this value as a continuous variable. Statistical analyses were conducted using STATA software (version 15.1; StataCorp, College Station, TX, USA). All t-tests were two-sided and p-values below 0.05 were considered significant.

We can conclude that high intakes of some polyphenols are inversely associated with the prevalence of T2D in older adults with metabolic syndrome, these relationships being more especially observed in overweight subjects than in obese ones. However, hydroxycinnamic acids are directly associated with T2D. In that sense, randomized controlled trials would be useful to confirm the promising benefits of polyphenols for the prevention and management of T2D.

We thank all the volunteers for their participation in and the personnel for their contribution to the PREDIMED-Plus trial. CIBEROBN, CIBERESP, and CIBERDEM are initiatives of Instituto de Salud Carlos III (ISCIII), Madrid, Spain. A.T.-R. thanks the Ministry of Science Innovation and Universities for the Juan de la Cierva-formación contract. 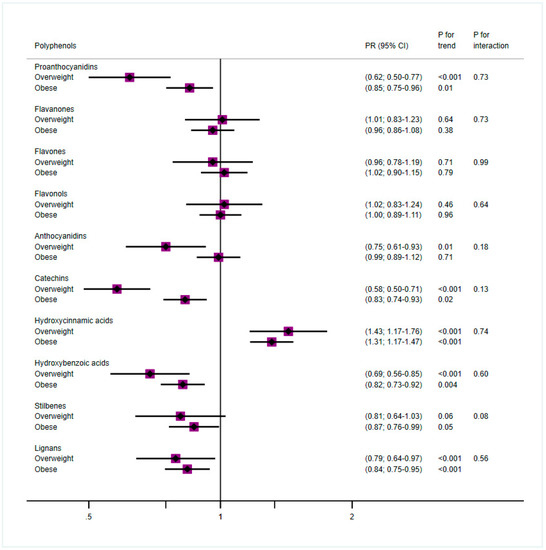