Anti-Oxidant and Tyrosinase Inhibitory In Vitro Activity of Amino Acids and Small Peptides: New Hints for the Multifaceted Treatment of Neurologic and Metabolic Disfunctions

Members of the DJ-1 protein family are multifunctional enzymes whose loss increases the susceptibility of the cell to oxidative stress. However, little is known about the function of the plant DJ-1 homologs. Therefore, we analyzed the effect of oxidation on the structure and function of chloroplastic AtDJ-1B and studied the phenotype of T-DNA lines lacking the protein. In vitro oxidation of AtDJ-1B with H2O2 lowers its glyoxalase activity, but has no effect on its holdase chaperone function. Remarkably, upon oxidation, the thermostability of AtDJ-1B increases with no significant alteration of the overall secondary structure. Moreover, we found that AtDJ-1B transcript levels are invariable, and loss of AtDJ-1B does not affect plant viability, growth and stress response. All in all, two discrete functions of AtDJ-1B respond differently to H2O2, and AtDJ-1B is not essential for plant development under stress. View Full-Text
Keywords: chaperone; glyoxalase; holdase; redox chaperone; glyoxalase; holdase; redox
►▼ Show Figures 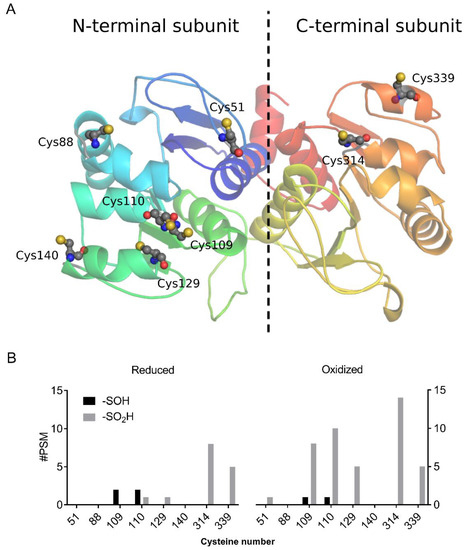