Inspired by Nature: Antioxidants and Nanotechnology
Next Article in Special Issue

Are Astrocytes the Predominant Cell Type for Activation of Nrf2 in Aging and Neurodegeneration?

Interleukin-1β (IL-1β), a key cytokine that drives neuroinflammation in the Central Nervous System (CNS), is enhanced in many neurological diseases/disorders. Although IL-1β contributes to and/or sustains pathophysiological processes in the CNS, we recently demonstrated that IL-1β can protect cortical astrocytes from oxidant injury in a glutathione (GSH)-dependent manner. To test whether IL-1β could similarly protect neurons against oxidant stress, near pure neuronal cultures or mixed cortical cell cultures containing neurons and astrocytes were exposed to the organic peroxide, tert-butyl hydroperoxide (t-BOOH), following treatment with IL-1β or its vehicle. Neurons and astrocytes in mixed cultures, but not pure neurons, were significantly protected from the toxicity of t-BOOH following treatment with IL-1β in association with enhanced GSH production/release. IL-1β failed to increase the GSH levels or to provide protection against t-BOOH toxicity in chimeric mixed cultures consisting of IL-1R1+/+ neurons plated on top of IL-1R1−/− astrocytes. The attenuation of GSH release via block of multidrug resistance-associated protein 1 (MRP1) transport also abrogated the protective effect of IL-1β. These protective effects were not strictly an in vitro phenomenon as we found an increased striatal vulnerability to 3-nitropropionic acid-mediated oxidative stress in IL-1R1 null mice. Overall, our data indicate that IL-1β protects neurons against oxidant injury and that this likely occurs in a non-cell-autonomous manner that relies on an increase in astrocyte GSH production and release. View Full-Text
Keywords: Interleukin 1β; neuroinflammation; neuroprotection; glutathione; astrocyte; neuronal injury; antioxidant; non-cell-autonomous protection Interleukin 1β; neuroinflammation; neuroprotection; glutathione; astrocyte; neuronal injury; antioxidant; non-cell-autonomous protection
►▼ Show Figures 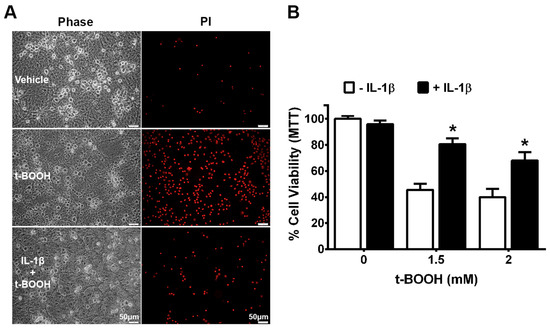