Avocado Seeds: Extraction Optimization and Possible Use as Antioxidant in Food

Consumption of avocado (Persea americana Mill) has increased worldwide in recent years. Part of this food (skin and seed) is lost during processing. However, a high proportion of bioactive substances, such as polyphenols, remain in this residue. The primary objective of this study was to model the extraction of polyphenols from the avocado pits. In addition, a further objective was to use the extract obtained to evaluate the protective power against oxidation in food systems, as for instance oil in water emulsions and meat products. Moreover, the possible synergy between the extracts and egg albumin in the emulsions is discussed. In Response Surface Method (RSM), the variables used are: temperature, time and ethanol concentration. The results are the total polyphenols content (TPC) and the antiradical power measured by Oxygen Radical Antioxidant Capacity (ORAC). In emulsions, the primary oxidation, by Peroxide Value and in fat meat the secondary oxidation, by TBARS (Thiobarbituric acid reactive substances), were analyzed. The RSM model has an R2 of 94.69 for TPC and 96.7 for ORAC. In emulsions, the inhibition of the oxidation is about 30% for pure extracts and 60% for the combination of extracts with egg albumin. In the meat burger oxidation, the formation of TBARS is avoided by 90%. View Full-Text
Keywords: RSM; avocado pit; ORAC; extraction; emulsion; oxidation; meat RSM; avocado pit; ORAC; extraction; emulsion; oxidation; meat
►▼ Show Figures 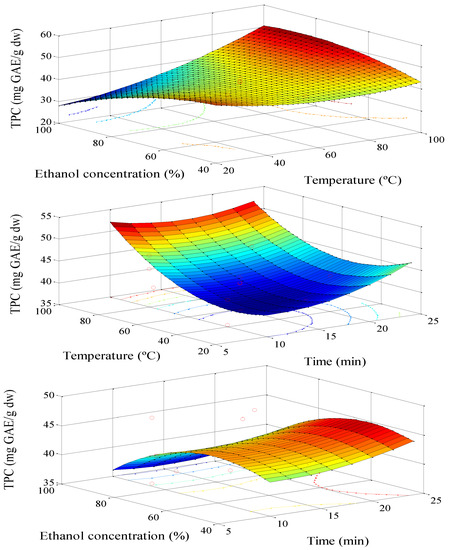