In Vitro Evaluation of Biological Activities of Canes and Pomace Extracts from Several Varieties of Vitis vinifera L. for Inclusion in Freeze-Drying Mouthwashes
Previous Article in Journal

Boerhavia diffusa is a great tropical plant and is widely used for various traditional purposes. In the present study, we examined the influence of solvents (dichloromethane, ethyl acetate, methanol and infusion (water)) on chemical composition and biological capabilities of B. diffusa. An UHPLC-HRMS method was used to determine the chemical characterization. The biological ability was examined for antioxidant, enzyme inhibitory and anti-cancer effects. To evaluate antioxidant effects, different chemical methods (ABTS, DPPH, CUPRAC, FRAP, metal chelating and phosphomolybdenum) were applied. With regard to enzyme inhibitory properties, cholinesterases, amylase, glucosidase and tyrosinase were used. The MDA-MB-231 breast cancer cell line was chosen to determine anticancer activity. Based on the UHPLC-HRMS analysis, 37 specialized metabolites were dereplicated and identified in the studied extracts. Results revealed the presence of 15 hydroxybenzoic, hydroxycinnamic, acylquinic acids, and their glycosides, one rotenoid, seven flavonoids, 12 fatty acids and two other glycosides. Among the tested extracts, the methanol extract showed a stronger antioxidant ability compared with other extracts. The methanol extract also showed the best inhibitory effects on tyrosinase and glucosidase. In the anti-cancer evaluation, the methanol extract showed stronger anticancer effects compared with water extract. In summary, our observations can contribute to the establishment of B. diffusa as a potential candidate for functional applications in the preparation. View Full-Text
Keywords: Boerhavia diffusa; antioxidant; enzyme inhibition; anti-cancer; flavonoids; functional applications Boerhavia diffusa; antioxidant; enzyme inhibition; anti-cancer; flavonoids; functional applications
►▼ Show Figures 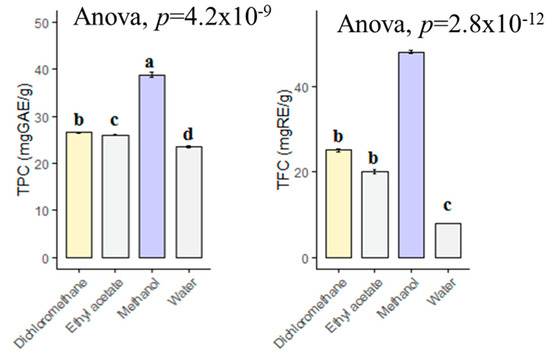