In autism spectrum disorders (ASD) many individuals have co-morbid immune dysregulation that can lead to inflammation in the brain and periphery. The novel cytokine interleukin (IL)-35 has described anti-inflammatory properties; however, the plasma levels of IL-35 in children with ASD have never been investigated. The plasma levels of IL-35 were measured by an enzyme-linked immunosorbent assay in 30 children with ASD and 39 typically developing (TD) controls. In the current study, we found that plasma IL-35 levels were significantly decreased in children with ASD compared with TD children. Furthermore, lower IL-35 levels were associated with worse behaviors as assessed using the aberrant behavior checklist. These findings are in line with other observations of decreased regulatory cytokines such as transforming growth factor beta and IL-10 in ASD, and associations with severity of behaviors. In conclusion, regulating the expression of IL-35 may provide a new possible target for the treatment of immune issues in ASD to address an imbalance between pro- and anti-inflammatory signals that alter the behavioral phenotype. View Full-Text
Keywords: autism spectrum disorders; cytokines; immune regulation; interleukin; IL-35; anti-inflammatory autism spectrum disorders; cytokines; immune regulation; interleukin; IL-35; anti-inflammatory
►▼ Show Figures 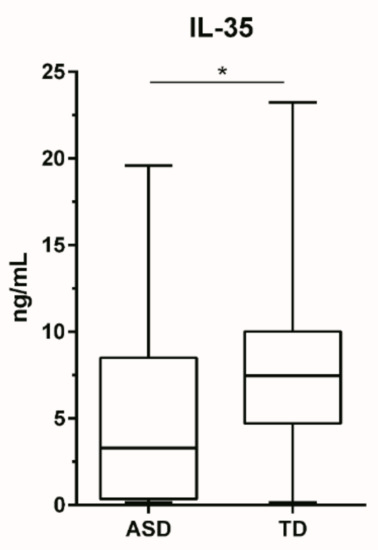