Parkinson’s Disease in Romania: A Scoping Review
Next Article in Special Issue

The Neurological Basis of Developmental Dyslexia and Related Disorders: A Reappraisal of the Temporal Hypothesis, Twenty Years on

In a now-classic article published a couple of decades ago (Brain, 2000; 123: 2373–2399), I proposed an “extended temporal processing deficit hypothesis of dyslexia”, suggesting that a deficit in temporal processing could explain not only language-related peculiarities usually noticed in dyslexic children, but also a wider range of symptoms related to impaired processing of time in general. In the present review paper, I will revisit this “historical” hypothesis both in the light of a new clinical perspective, including the central yet poorly explained notion of comorbidity, and also taking a new look at the most recent experimental work, mainly focusing on brain imaging data. First, consistent with daily clinical practice, I propose to distinguish three groups of children who fail to learn to read, of fairly equal occurrence, who share the same initial presentation (difficulty in mastering the rules of grapheme–phoneme correspondence) but with differing associated signs and/or comorbid conditions (language disorders in the first group, attentional deficits in the second one, and motor coordination problems in the last one), thus suggesting, at least in part, potentially different triggering mechanisms. It is then suggested, in the light of brain imaging information available to date, that the three main clinical presentations/associations of cognitive impairments that compromise reading skills acquisition correspond to three distinct patterns of miswiring or “disconnectivity” in specific brain networks which have in common their involvement in the process of learning and their heavy reliance on temporal features of information processing. With reference to the classic temporal processing deficit of dyslexia and to recent evidence of an inability of the dyslexic brain to achieve adequate coupling of oscillatory brain activity to the temporal features of external events, a general model is proposed according to which a common mechanism of temporal uncoupling between various disconnected—and/or mis-wired—processors may account for distinct forms of specific learning disorders, with reading impairment being a more or less constant feature. Finally, the potential therapeutic implications of such a view are considered, with special emphasis on methods seeking to enhance cross-modal connectivity between separate brain systems, including those using rhythmic and musical training in dyslexic patients. View Full-Text
Keywords: brain imaging; dyslexia; learning disorders; music; phonology; rhythm; time processing; tractography brain imaging; dyslexia; learning disorders; music; phonology; rhythm; time processing; tractography
►▼ Show Figures 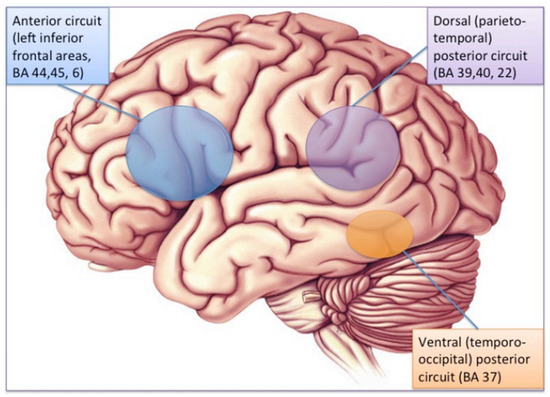