The mechanisms underlying sound’s effect on tinnitus perception are unclear. Tinnitus activity appears to conflict with perceptual expectations of “real” sound, resulting in it being a salient signal. Attention diverted towards tinnitus during the later stages of object processing potentially disrupts high-order auditory streaming, and its uncertain nature results in negative psychological responses. This study investigated the benefits and neurophysiological basis of passive perceptual training and informational counseling to recategorize phantom perception as a more real auditory object. Specifically, it examined underlying psychoacoustic correlates of tinnitus and the neural activities associated with tinnitus auditory streaming and how malleable these are to change with targeted intervention. Eighteen participants (8 females, 10 males, mean age = 61.6 years) completed the study. The study consisted of 2 parts: (1) An acute exposure over 30 min to a sound that matched the person’s tinnitus (Tinnitus Avatar) that was cross-faded to a selected nature sound (Cicadas, Fan, Water Sound/Rain, Birds, Water and Bird). (2) A chronic exposure for 3 months to the same “morphed” sound. A brain-inspired spiking neural network (SNN) architecture was used to model and compare differences between electroencephalography (EEG) patterns recorded prior to morphing sound presentation, during, after (3-month), and post-follow-up. Results showed that the tinnitus avatar generated was a good match to an individual’s tinnitus as rated on likeness scales and was not rated as unpleasant. The five environmental sounds selected for this study were also rated as being appropriate matches to individuals’ tinnitus and largely pleasant to listen to. There was a significant reduction in the Tinnitus Functional Index score and subscales of intrusiveness of the tinnitus signal and ability to concentrate with the tinnitus trial end compared to baseline. There was a significant decrease in how strong the tinnitus signal was rated as well as ratings of how easy it was to ignore the tinnitus signal on severity rating scales. Qualitative analysis found that the environmental sound interacted with the tinnitus in a positive way, but participants did not experience change in severity, however, characteristics of tinnitus, including pitch and uniformity of sound, were reported to change. The results indicate the feasibility of the computational SNN method and preliminary evidence that the sound exposure may change activation of neural tinnitus networks and greater bilateral hemispheric involvement as the sound morphs over time into natural environmental sound; particularly relating to attention and discriminatory judgments (dorsal attention network, precentral gyrus, ventral anterior network). This is the first study that attempts to recategorize tinnitus using passive auditory training to a sound that morphs from resembling the person’s tinnitus to a natural sound. These findings will be used to design future-controlled trials to elucidate whether the approach used differs in effect and mechanism from conventional Broadband Noise (BBN) sound therapy. View Full-Text
Keywords: tinnitus perception; recategorizing; tinnitus avatar; psychoacoustic; environmental sounds; morphed sound; brain-inspired spiking neural network tinnitus perception; recategorizing; tinnitus avatar; psychoacoustic; environmental sounds; morphed sound; brain-inspired spiking neural network
►▼ Show Figures 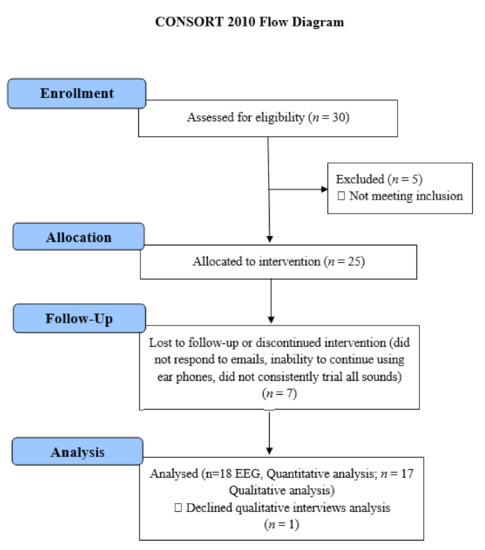