:
Categorization based on quasi-joint stiffness (QJS) may help clinicians select appropriate ankle foot orthoses (AFOs). The objectives of the present study were to classify the gait pattern based on ankle joint stiffness, also called QJS, of the gait in patients after stroke and to clarify differences in the type of AFO among 72 patients after stroke. Hierarchical cluster analysis was used to classify gait patterns based on QJS at least one month before the study, which revealed three distinct subgroups (SGs 1, 2, and 3). The proportion of use of AFOs, articulated AFOs, and non-articulated AFOs were significantly different among SGs 1–3. In SG1, with a higher QJS in the early and middle stance, the proportion of the patients using articulated AFOs was higher, whereas in SG3, with a lower QJS in both stances, the proportion of patients using non-articulated AFOs was higher. In SG2, with a lower QJS in the early stance and higher QJS in the middle stance, the proportion of patients using AFOs was lower. These findings indicate that classification of gait patterns based on QJS in patients after stroke may be helpful in selecting AFO. However, large sample sizes are required to confirm these results.
Keywords:
categorization; gait; stroke; quasi-joint stiffness; ankle joint; orthosis

We recruited 72 patients with hemiplegia due to stroke. Inclusion criteria were as follows: (1) stroke due to ischemic or hemorrhagic supratentorial lesion, (2) stroke occurring at least one month before this study, (3) ability to walk a flat path of 7 m without the use of a cane and orthosis, and (4) ability to understand instructions by physical therapists. Exclusion criteria were as follows: (1) abnormal circulatory and respiratory status, (2) history of orthopedic problems that interfered with gait, (3) brainstem or cerebellar lesions, (4) diabetic neuropathy, (5) abnormal mental status, (6) higher brain dysfunction, which would cause skewed measurements, and (7) pain in the lower or upper limb when walking, which would cause skewed measurements. The present study was approved by the local ethics committee of Tohoku University of Medicine, Japan.

Information about clinical and demographic characteristics and daily-wear AFOs was obtained through interviews with the patients and from their medical records. The use of daily-wear AFOs for at least one week was divided into two types of AFO: articulated and non-articulated AFOs. All subjects who wore AFOs used passive devices, with reference to the previous study [15]. The number of subjects using articulated or non-articulated AFOs daily or not using AFOs was 24, 23, and 25, respectively. A physical therapist (Y.S.) evaluated the Brunnstrom Stages of Motor Recovery of the lower extremity and neurological impairment using the Stroke Impairment Assessment Set (SIAS) [28].

Three-dimensional coordinates of 33 reflective markers attached to 12 segments (Table 1) were measured using a three-dimensional motion analysis system (Motion Analysis Corporation, Santa, Rosa, CA, USA) equipped with eight cameras operating at 120 Hz. A 12-segment model based on anthropometric data was implemented as described by Dumas [29]. Ground reaction force (GRF) data were acquired at a 1200 Hz sampling rate using four 90 cm × 60 cm force plates (Anima Corporation, Chofu, Tokyo, Japan). The participants were asked to walk at a self-selected speed without assistance devices. All subjects walked 4–10 times on a 7 m long walkway until we successfully measured five steps on a unilateral side (i.e., a successful trial during which the foot strikes only one force plate and not two at the same time and the subjects do not stop, trip, or slip while walking), (Figure 1).
The three-dimensional coordinates and GRF data were smoothed using a bidirectional fourth-order Butterworth low-pass filter with a cutoff frequency of 6 Hz and 80 Hz, respectively. We decided the cutoff frequencies of three-dimensional coordinates based on a previous study [30]. The cutoff frequency of GRF was also determined with reference to a previous study [31]. For each joint in the lower extremities, kinematic data were calculated using a joint coordinate system [32]. In addition, the kinetics of the lower extremity joints were estimated using inverse dynamics [32]. All kinematic and kinetic data were time-normalized to 100% of the one-gait cycle. The representative parameters for the gait in the patient group were extracted from the kinematic and kinetic data following the method of a previous study [33]. The first and second maximum knee extension moment are the maximum knee extension moment in the first (i.e., in ES or MS) and second half of the stance phase (i.e., in MS or late stance). The representative parameters related to compensatory strategies in the paretic swing phase were calculated as the segment angle in the global coordination system [34]. The kinetic data were normalized to the patient’s body weight. The peak propulsion was identified as the maximum value of the GRF curve in the forward direction during gait.
We calculated QJS on the paretic side from the slope of the linear regression of the ankle joint moment versus the ankle angle during the second rocker interval, which was subdivided into ES and MS following the approach of previous studies [17,18]. We defined ES and MS in the second rocker interval as intervals from the peak plantarflexion angle in the stance of a leading (paretic) leg to the toe off of a trailing (non-paretic) leg and from the toe off of a trailing (non-paretic) leg to the maximum dorsiflexion angle in a stance of a leading (paretic) leg, respectively.
All data analyses were processed using a custom MATLAB program (MathWorks, Inc., Natick, MA, USA).

A hierarchical cluster analysis was used to identify subgroups (SGs) with homogeneous QJS in ES and MS. In preparation for the cluster analysis, two clustering variables (i.e., only QJS in ES and MS but not in kinematic and kinetic parameters) were standardized using Z-scores; then, clustering algorithms utilizing Ward’s linkage method and squared Euclidean distance measures were applied. SGs were formed in an agglomerative manner, starting with each observation as their own SG and at every step pairing the two closest SGs together until only one group remained. The final number of SGs was chosen based on a stopping rule (a large percentage decrease in the coefficient followed by a plateau) [24]. The number of SGs was confirmed by visual inspection of the dendrogram [35].
Differences in age, height, weight, time post stroke, and gait spatiotemporal and kinematic and kinetic parameters were compared among SGs using one-way analysis of variance followed by Bonferroni’s multiple comparison procedure. Differences in sex, paretic side, and diagnosis among these groups were tested using Pearson’s chi-squared test. The Kruskal–Wallis non-parametric test, with the post hoc Wilcoxon rank sum test with Bonferroni correction, was used to compare the SAIS among SGs. Differences in the use of AFO among these groups were tested using two-sided Fisher’s exact test followed by one-sided Fisher’s exact test with Bonferroni corrections and mid-p adjustment. We used mid-p adjustment only when performing one-sided Fisher’s exact test for multiple comparison, because Fisher’s exact test is somewhat conservative [36,37]. A significance limit of α = 0.05 was selected. The eta-squared (η2) was calculated to estimate the effect size. Statistical analyses were performed using a statistical software package (SPSS Ver.24, IBM-SPSS Inc., Chicago, IL, USA) and JMP Pro 16 (SAS Institute Inc., Cary, NC, USA). JMP Pro 16 was used only when Fisher’s exact test was performed. In addition, one-sided Fisher’s exact test with mid-p adjustment and Bonferroni corrections was performed using a custom MATLAB program (MathWorks Inc., Natick, MA, USA) [38,39].

The dendrogram for the clustering results is outlined in Figure 2. Between SGs two and three, there was a large decrease in the agglomeration coefficients (48.0%), followed by that between SGs three and four (33.0%). Additionally, the result was confirmed by visual inspection of the dendrogram, as shown in Figure 2. Therefore, the number of SGs was set to three.

3.1. Differences in Gait Parameters among the SGs

3.2. Differences in Demographic Data and Clinical Features among the Subgroups

No differences (all p > 0.156) in age, height, weight, time post stroke, sex, diagnosis, and paretic side among the SGs were found, as shown in Table 5.

In SG3, items for motor function in lower limb in the SIAS were lower than those in SG2 (ankle joint: p = 0.002, knee joint: p = 0.009, and hip joint: p = 0.004), as shown in Table 5. However, there was no significant difference in deep tendon reflex and range of motion in ankle dorsiflexion in SIAS among the SGs.

This research was funded by Grant-in-Aid for Scientific Research (B), grant number JP20H04260, and NEC Corporation.

The study was conducted according to the guidelines of the Declaration of Helsinki and approved by the Ethics Committee of the Tohoku University Graduate School of Medicine (2019-1-432).

Data are available on request due to privacy and ethical restrictions.

We would like to thank the staff at the Department of Physical Medicine and Rehabilitation at Tohoku University for their advice and help. 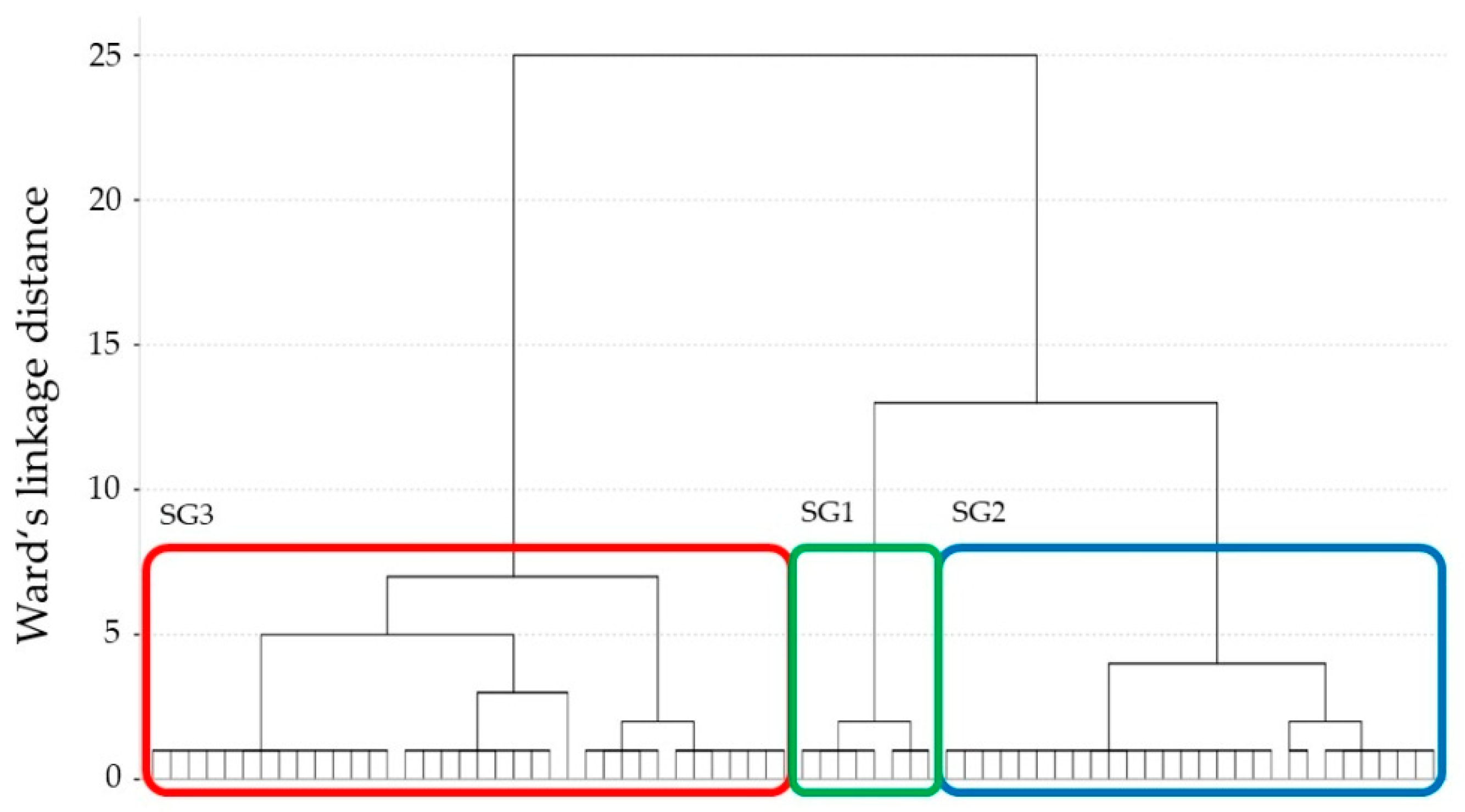