Localization of ZIP14 and ZIP8 in HIBCPP Cells

Cocaine abuse is known to alter mitochondrial biogenesis and induce epigenetic modification linked with neuronal dysfunction. Cocaine-induced epigenetic modification of DNA methylation and the mitochondrial genome may affect mitochondrial DNA (mtDNA) and nuclear DNA (nDNA), as epigenetic DNA methylation is key to maintaining genomic integrity in the central nervous system (CNS). However, the impact of cocaine-mediated epigenetic changes in astrocytes has not yet been elucidated. In this study, we explored the neuroprotective effect of piracetam against cocaine-induced epigenetic changes in DNA methylation in astrocytes. To study our hypothesis, we exposed human astrocytes to cocaine alone or in combination with the nootropic drug piracetam. We examined the expression of the DNA methyltransferases (DNMTs) DNMT-1, DNMT-3A, and DNMT-3B; global DNA methylation levels of 5-methycytosine (5-mC); and induction of ten–eleven translocation (TET) enzymes in astrocytes. In addition, we analyzed mtDNA methylation by targeted next-generation bisulfite sequencing. Our data provide evidence that cocaine impairs DNMT activity and thereby has impacts on mtDNA, which might contribute to the neurodegeneration observed in cocaine users. These effects might be at least partially prevented by piracetam, allowing neuronal function to be maintained. View Full-Text
Keywords: cocaine; piracetam; DNMTs; TET and astrocytes cocaine; piracetam; DNMTs; TET and astrocytes
►▼ Show Figures 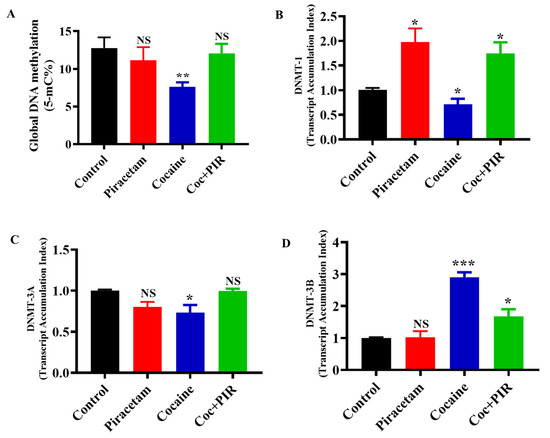