Autistic-Like Features in Visually Impaired Children: A Review of Literature and Directions for Future Research
Previous Article in Journal

Background: Sialidosis is a rare autosomal recessive disease caused by NEU1 mutations, leading to neuraminidase deficiency and accumulation of sialic acid-containing oligosaccharides and glycopeptides into the tissues. Sialidosis is divided into two clinical entities, depending on residual enzyme activity, and can be distinguished according to age of onset, clinical features, and progression. Type 1 sialidosis is the milder, late-onset form, also known as non-dysmorphic sialidosis. It is commonly characterized by progressive myoclonus, ataxia, and a macular cherry-red spot. As a rare condition, the diagnosis is often only made after few years from onset, and the clinical management might prove difficult. Furthermore, the information in the literature on the long-term course is scarce. Case presentations: We describe a comprehensive clinical, neuroradiological, ophthalmological, and electrophysiological history of four unrelated patients affected by type 1 sialidosis. The long-term care and novel clinical and neuroradiological insights are discussed. Discussion and conclusions: We report the longest follow-up (up to 30 years) ever described in patients with type 1 sialidosis. During the course, we observed a high degree of motor and speech disability with preserved cognitive functions. Among the newest antiseizure medication, perampanel (PER) was proven to be effective in controlling myoclonus and tonic–clonic seizures, confirming it is a valid therapeutic option for these patients. Brain magnetic resonance imaging (MRI) disclosed new findings, including bilateral gliosis of cerebellar folia and of the occipital white matter. In addition, a newly reported variant (c.914G > A) is described. View Full-Text
Keywords: type-1-sialidosis; myoclonus; brain MRI; cherry-red spot; giant SEP; jerk-locked back averaging analysis type-1-sialidosis; myoclonus; brain MRI; cherry-red spot; giant SEP; jerk-locked back averaging analysis
►▼ Show Figures 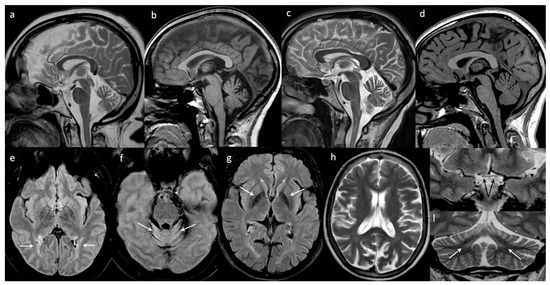