Bimodal Benefits for Lexical Tone Recognition: An Investigation on Mandarin-speaking Preschoolers with a Cochlear Implant and a Contralateral Hearing Aid
Previous Article in Journal

Perspectives on Deep Brain Stimulation and Its Earlier Use for Parkinson’s Disease: A Qualitative Study of US Patients
Previous Article in Special Issue

Aging and Central Auditory Disinhibition: Is It a Reflection of Homeostatic Downregulation or Metabolic Vulnerability?

Expression and Localization of Kv1.1 and Kv3.1b Potassium Channels in the Cochlear Nucleus and Inferior Colliculus after Long-Term Auditory Deafferentation

Miguel A. Merchan
2 and

Deafness affects the expression and distribution of voltage-dependent potassium channels (Kvs) of central auditory neurons in the short-term, i.e., hours to days, but the consequences in the expression of Kvs after long-term deafness remain unknown. We tested expression and distribution of Kv1.1 and Kv3.1b, key for auditory processing, in the rat cochlear nucleus (CN), and in the inferior colliculus (IC), at 1, 15 and 90 days after mechanical lesion of the cochlea, using a combination of qRT-PCR and Western blot in the whole CN, along with semi-quantitative immunocytochemistry in the AVCN, where the role of both Kvs in the control of excitability for accurate auditory timing signal processing is well established. Neither Kv1.1/Kv3.1b mRNA or protein expression changed significantly in the CN between 1 and 15 days after deafness. At 90 days post-lesion, however, mRNA and protein expression for both Kvs increased, suggesting that regulation of Kv1.1 and Kv3.1b expression is part of cellular mechanisms for long-term adaptation to auditory deprivation in the CN. Consistent with these findings, immunocytochemistry showed increased labeling intensity for both Kvs in the AVCN at day 90 after cochlear lesion. This increase argues that up-regulation of Kv1.1 and Kv3.1b in AVCN neurons may be required to adapt intrinsic excitability to altered input over the long term after auditory deprivation. Contrary to these findings in the CN, expression levels of Kv1.1 and Kv3.1b in the IC did not undergo major changes after cochlear lesion. In particular, there was no evidence of long-term up-regulation of either Kv1.1 or Kv3.1b, supporting that such post-lesion adaptive mechanism may not be needed in the IC. These results reveal that post-lesion adaptations do not necessarily involve stereotyped plastic mechanisms along the entire auditory pathway. View Full-Text
Keywords: auditory; plasticity; hearing loss; ion channels; post-lesion plasticity auditory; plasticity; hearing loss; ion channels; post-lesion plasticity
►▼ Show Figures 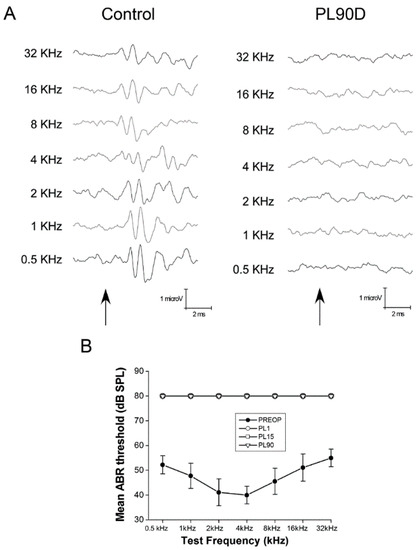