Deep Brain Stimulation of the Pedunculopontine Tegmental Nucleus Renders Neuroprotection through the Suppression of Hippocampal Apoptosis: An Experimental Animal Study
Next Article in Special Issue

Perspectives on Deep Brain Stimulation and Its Earlier Use for Parkinson’s Disease: A Qualitative Study of US Patients
Previous Article in Journal

Deep brain stimulation (DBS) of the subthalamic nucleus (STN) has become an effective and widely used tool in the treatment of Parkinson’s disease (PD). STN-DBS has varied effects on speech. Clinical speech ratings suggest worsening following STN-DBS, but quantitative intelligibility, perceptual, and acoustic studies have produced mixed and inconsistent results. Improvements in phonation and declines in articulation have frequently been reported during different speech tasks under different stimulation conditions. Questions remain about preferred STN-DBS stimulation settings. Seven right-handed, native speakers of English with PD treated with bilateral STN-DBS were studied off medication at three stimulation conditions: stimulators off, 60 Hz (low frequency stimulation—LFS), and the typical clinical setting of 185 Hz (High frequency—HFS). Spontaneous speech was recorded in each condition and excerpts were prepared for transcription (intelligibility) and difficulty judgements. Separate excerpts were prepared for listeners to rate abnormalities in voice, articulation, fluency, and rate. Intelligibility for spontaneous speech was reduced at both HFS and LFS when compared to STN-DBS off. On the average, speech produced at HFS was more intelligible than that produced at LFS, but HFS made the intelligibility task (transcription) subjectively more difficult. Both voice quality and articulation were judged to be more abnormal with DBS on. STN-DBS reduced the intelligibility of spontaneous speech at both LFS and HFS but lowering the frequency did not improve intelligibility. Voice quality ratings with STN-DBS were correlated with the ratings made without stimulation. This was not true for articulation ratings. STN-DBS exacerbated existing voice problems and may have introduced new articulatory abnormalities. The results from individual DBS subjects showed both improved and reduced intelligibility varied as a function of DBS, with perceived changes in voice appearing to be more reflective of intelligibility than perceived changes in articulation. View Full-Text
Keywords: speech; Parkinson’s disease; deep brain stimulation; voice; articulation speech; Parkinson’s disease; deep brain stimulation; voice; articulation
►▼ Show Figures 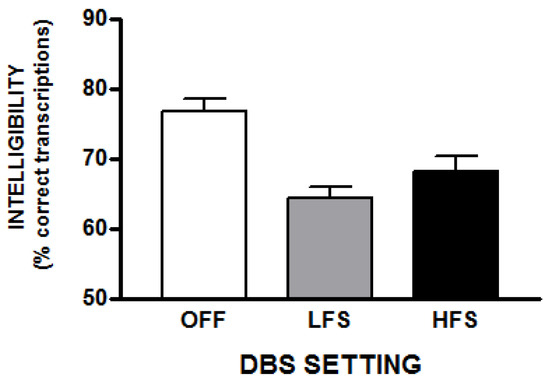